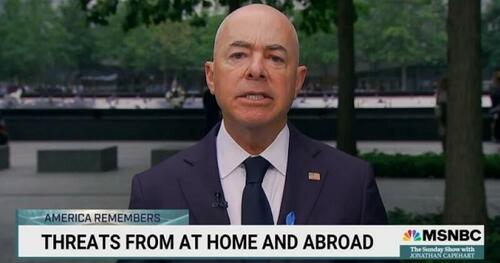 The demonization of Americans continued on the anniversary of 9/11, when DHS chief Alejandro Mayorkas suggested the biggest terror threat was ‘domestic extremists’ radicalized by “false narratives propagated on online platforms.”

The Homeland Security Secretary made the comments during an appearance on MSNBC.

Speaking from ground zero in New York, Mayorkas said “the threat landscape has evolved considerably over the last 20 years,” and that foreign terrorism has now taken a back seat to domestic extremism.

“We are seeing an emerging threat, of course, over the last several years of the domestic violent extremist,” said the DHS chief.

“The individual here in the United States radicalized to violence by a foreign terrorist ideology, but also an ideology of hate, anti-government sentiment, false narratives propagated on online platforms, even personal grievances,” he added.

As Chris Menahan highlights, Mayorkas has wielded a pretty broad brush when it comes to defining what behavior qualifies as ‘domestic extremism’.

“Mayorkas said last year that white extremists are the greatest threat to America and put out terror alerts painting opponents of covid lockdowns and people who don’t trust the Biden regime as potential domestic terrorists.”

As we previously highlighted, Democratic Senator Mark Warner used the 21st anniversary of 9/11 to absurdly compare the terrorists who attacked the twin towers and the Pentagon to “insurgents” who entered the Capitol on January 6.

In the mid to late 90’s, the Clinton administration became obsessed with domestic extremism and routinely hyped its threat as a way to demonize conservatives. Then 9/11 happened.

Not much has changed, has it?

In the age of mass Silicon Valley censorship It is crucial that we stay in touch. I need you to sign up for my free newsletter here. Support my sponsor – Turbo Force – a supercharged boost of clean energy without the comedown. Get early access, exclusive content and behind the scenes stuff by following me on Locals.