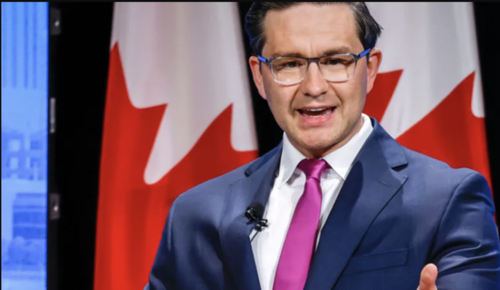 Authored by Mark Jeftovic via BombThrower.com,

Pierre Poilievre dispensed the naysayers in the Canadian Conservative leadership convention and swept the top job on the first ballot, something that hasn’t happened since Stephen Harper kicked off his political dynasty in 2004.

The Poilievre movement brought 300,000 new members into the Conservative Party (myself and my wife included), which resulted in 68% of votes. The Laurentian elite anointed (and media approved) candidate was Jean Charest,  who was clubbed like a baby seal, stitching together a mere 16% of the vote. This morning Charest announced his departure from politics.

The entirety of Charest support originated in the Ottawa and Quebec liberal strongholds. Even downtown Toronto, where the Conservatives are dominated by so-called “Red Tories”, voted overwhelmingly for Poilievre.

The few Charest supporters whose lives are confined almost entirely to a bubble-wrapped echo chamber surrounding downtown Ottawa are now ruminating that Poilievre is “unelectable” and can’t beat Justin Trudeau in an election contest.

There have even been rumblings of the prospect that Trudeau may, if Poilievre were to win, call a snap election this fall in order to catch the , unelectable populist off-guard. In August, Jean Charest sent a desperate, hyperventilating email to party members begging for their support and fearmongering the prospect of Trudeau trouncing an unprepared Poilievre this fall:

Firing the Governor of the Bank of Canada and embracing Bitcoin you say? lol. WHERE DO I SIGN UP?

Any snap election this fall would be the political miscalculation of the century. The map above shows you everything you need to know about what is happening in Canada: a mad-as-hell public, betrayed, and increasingly demonized by  out-of-touch elites from an entitled political class that straddles all parties.

When the trucker convoy started in February, I said its mishandling would cost all three party leaders their job and it had gutted any remaining credibility of Canadian mainstream media. This thesis is playing out in spades.

The last time the Canadian public was this disenfranchised and alienated by the incumbent government was when Brian Mulroney’s Progressive Conservative party was literally destroyed in the 1993 federal election, going from 156 seats to 2. They lost their party status, and that was the end of the PCs (until the aforementioned Harper led a reconstituted Conservative Party – with elements of the Reform Party and Canadian Alliance – to power in 2004).

The Liberals are headed for a similar fate. Earlier this year Trudeau and the millionaire Marxist Jagmeet Singh merged their parties into a Liberal/Socialist coalition in a deal that would keep them in power until 2025. If the alliance hangs together that long it will remain to be seen whether Trudeau actually sticks around for the election. It’s more likely that he bows out, leaving one of his underlings holding the bag for the inevitable carnage that will see the Liberals utterly eviscerated the next time Canadian voters get a crack at them.

Mark E. Jeftovic is the CEO of easyDNS, co-founder of Bombthrower Media, author and investor. Sign up for The Bombthrower mailing list to get updates straight into your inbox and get a free copy of The Crypto Capitalist Manifesto while you’re at it. Follow me on Gettr, Telegram or if you haven’t been kicked off Twitter yet, there