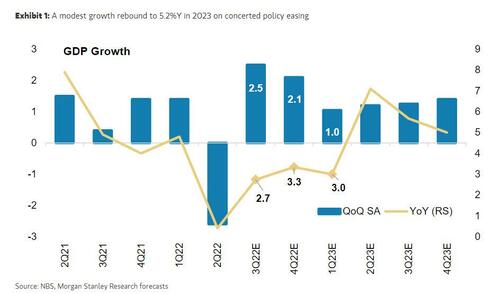 Surging food and energy prices alongside increasingly aggressive monetary policy tightening all point to a massive slowdown in DM economies and a global economy on the brink of recession. Investors’ attention will necessarily turn to China, perhaps in the hopes that it can once again buoy global growth as it did after the global financial crisis. Such optimism should be tempered as China’s economy is in a fragile condition, and we forecast below-consensus 2.8%Y GDP growth this year. We look for only a modest rebound to 5.2%Y in 2023 as Beijing gradually alleviates the housing and Covid overhangs.

While the Chinese economy has bottomed after the policy-induced contraction in 2Q22, Covid restrictions and an imploding housing market have sapped momentum. Any rebound will depend on policy, and the policy mandate remains focused on job market stability. To date, we have seen a resumption in monetary policy easing, incremental support for the real estate sector, and additional infrastructure spending. But these steps have garnered little traction because of housing developers’ liquidity challenges and lingering Covid restrictions. Our baseline forecast sees growth rebounding in 2023, but that recovery depends heavily on policy addressing these two key obstacles. Hence, we look for a more concerted policy response and a clearer path towards reopening after the 20th Party Congress that opens on October 16 (five-yearly political reshuffle).

First, to limit fallout from the housing sector, Beijing will likely ramp up policy support. Admittedly, China’s housing market has entered a structural downward trajectory as the population ages, but the recent collapse vastly exceeds that trend. The choke point is home-buyers’ lack of confidence in developers’ ability to deliver pre-sold houses, which crimps new home sales and puts more stress on developers’ liquidity. We think that Beijing will provide additional funding and better-coordinated intervention to ensure contracted home construction is completed, breaking the negative feedback loop. The PBOC has already rolled out Rmb 200 billion in policy bank loans to support project delivery. We will monitor the implementation, and expect more concerted efforts post the Party Congress.
More broadly, we think that a housing collapse so severe that it precipitates a financial crisis is unlikely. China has very tight prudential mortgage standards and modest bank exposure to the housing sector. Long term, limited land price speculation in non-property sectors should prevent a ‘balance sheet recession’ like the one seen in Japan in the 1990s. Moreover, while a structurally weaker property sector would weigh on growth in building materials, housing-related consumption, and infrastructure investment, China’s continued pivot to initiatives like Urbanization 2.0, industrial digitalization, and green investment could help to sustain productivity growth. While a weak housing recovery is possible, a collapse seems far-fetched.
Second, we expect a gradual exit from Covid-zero next spring, given the mounting pressures on growth and the job market. Since 2Q22, restrictions have already become more targeted and less disruptive. But in each new outbreak, maintaining supply chains has taken priority, so that consumption spending, particularly on services, still faces significant headwinds. For now, the renewed lockdowns in several major cities and the recent slowdown in vaccination progress, coupled with a risk of resurgence during the winter, suggest that a swift end to Covid-zero after the Party Congress is doubtful. The key metrics to watch will be the pace of vaccinations, wider adoption of domestic Covid treatments, and shifts in public opinion. In particular, getting the over-60 population to an 80% booster vaccination rate next spring would presage a removal of restrictions.

Provided that policy can address these two impediments, the economic recovery should firm up from 2Q23 onwards, with 2023 growth slightly above 5%Y. But even with this rebound, the positive spillover to the rest of the world will not be on par with history. Stabilizing the property sector should support capex spending, as should infrastructure spending in 2H23, both of which are familiar drivers of Chinese imports. But the key driver would be a turnaround in domestic private consumption, particularly of services, so the demand pull from other economies will be somewhat muted. Thus, while we doubt that China will tip the global economy into recession, neither do we see China as its salvation.