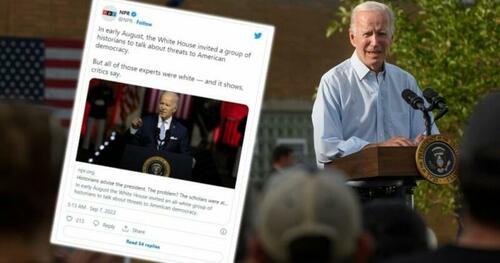 National Public Radio has slammed Joe Biden for meeting with a group of historians at the White House because “all of those experts were white.”

“In early August, the White House invited a group of historians to talk about threats to American democracy,” tweeted NPR. “But all of those experts were white — and it shows, critics say.”

In early August, the White House invited a group of historians to talk about threats to American democracy.

But all of those experts were white — and it shows, critics say.https://t.co/ypfjrxsr9j

Oh no, they were white? The absolute horror.

The article published by NPR complains that because the historians were not ‘diverse’ enough, they all held the same opinions, because apparently opinions are solely determined by skin color.

“After The Washington Post reported on the historians meeting, it didn’t take long for some to raise questions, not about the fact that democracy is in peril, but about the monochromatic makeup of those delivering that message,” states the piece.

“It seemed the Biden administration had only invited white experts to advise the president — four historians and one journalist: Princeton historian Sean Wilentz, University of Virginia historian Allida Black, presidential historians Michael Beschloss and Jon Meacham, who is also an occasional speechwriter for Biden, and journalist and Atlantic staff writer Anne Applebaum.”

The article went on to claim that it is “concerning” that Biden met with white historians because Republicans are attempting to eliminate “the histories of Black people and people of color across the United States” (no evidence provided).

The article asserted that threats to “democracy,” the latest repackaging of the Biden administration demonizing millions of ordinary Americans as domestic extremists, are more keenly felt by non-white people while also being part of a “slow ongoing repression.”

One form of official oppression not faced by black people in America is major legacy media outlets demonizing their entire race as somehow inferior, which is what NPR did with this tweet and story.

And just to be clear – it’s okay to be white.

In the age of mass Silicon Valley censorship It is crucial that we stay in touch. I need you to sign up for my free newsletter here. Support my sponsor – Turbo Force – a supercharged boost of clean energy without the comedown. Get early access, exclusive content and behind the scenes stuff by following me on Locals.