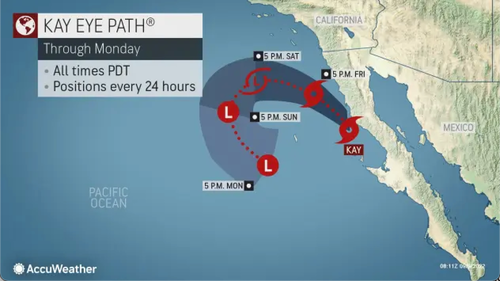 While tropical activity in the Atlantic Basin remains remarkably underwhelming this hurricane season, with no named storms in August, though several now but have no trajectories for US landfall, a tropical storm crawling up the coast of Baja California, Mexico, is set to dump a substantial amount of moisture across the bone-dry southwestern US.

The cold waters in the Pacific Ocean in Southern California usually degrade big storms from the south, but it looks like parts of Tropical Storm Kay will reach the San Diego-Tijuana region by Friday.

The National Hurricane Service forecasts Kay will dump “several months to a year’s worth of rain to a normally arid landscape” on Friday in Southern California, which has been plagued with record-breaking temperatures and the worst drought conditions in decades, if not centuries.

Since the 1950s, only four tropical storms have come this close to Southern California, according to the National Weather Service. Kay won’t directly impact San Diego as it turns westward and away from the coast, though the storm’s remnants will soak the region.

The good news is the heatwave will dissipate in Southern California after the storm passes:

“Much of the heat is going to give way through the weekend,” said Frank Pereira, a senior branch forecaster at the US Weather Prediction Center. “Today is really the last of the worst of it for much of California.”

Check out the plunge in San Diego’s high temperatures over the week.

The problem with all this expected heavy rain in drought-stricken southwestern US is that it will likely trigger flash floods and people who live on hillsides and in canyons need to be on high alert.

It must be global warming. Where’s Greta?