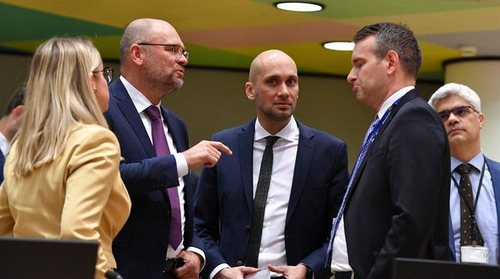 An emergency meeting of EU energy ministers on Friday meant to reassure both energy companies and the European public regarding soaring prices and severely strained supply amid Russian countermeasures in response to Western sanctions is off to shaky and fractured start. Rather than reassure anyone of anything, it’s already clear the issue of a proposed cap on gas prices has only divided the bloc further, akin to the same prior question with oil.

Leading the way in pointing out the flawed logic of the plan, Hungarian Foreign Minister Peter Szijjarto pointed out the blowback would be worse than the sting aimed at Russia. “If price restrictions were to be imposed exclusively on Russian gas, that would evidently lead to an immediate cut-off in Russian gas supplies. It does not take a Nobel Prize to recognize that,” he said.

Echoing prior words of Hungarian leader Viktor Orbán, he said “The plan that would impose a price cap exclusively on Russian gas coming via pipelines is entirely against European and Hungarian interests.”

Jozef Síkela, the Czech energy minister chairing the meeting, went into it echoing a martial tone with talk of engaging in “energy war” which is unlikely to match any corresponding action (there won’t be any): “We are in an energy war with Russia. Putin is trying, by manipulating the market, to break the social peace in our countries, affect our way of life and attack our economies.”

Síkela said ministers were hoping to send “a clear message that will calm down the markets” by day’s end. This as over the course of the six-month Ukraine war Russian gas supplies to the collective EU have been cut by a stark 80% amid ominous reminders that “winter is coming”.

And yet, with Italy, Poland, Hungary and Greece standing out as among the most vocal opponents of such a cap among at least 10 EU countries who have voiced their reservations, FT notes that some governments are “warning that singling out Russia could push President Vladimir Putin to cut supplies to Europe completely.”

One senor EU official cited anonymously in FT summed up the ongoing dilemma as follows:

“Everyone is afraid of the domino effect” if Russia cuts off supply because European states are so interconnected, said a senior EU official. “If you cut off Russian gas only, you infuriate Russia without affecting other suppliers and if you are, say, Portugal who imports no Russian gas, what can you take back to voters?”

For this reason, the meeting is not expected to delve too deep or dwell too long on the divisive price cap plan, even though Belgium is among those claiming that just “technical” issues would have to be worked out, but that a cap is achievable. Meanwhile, initial indicators point to nothing substantial coming out of the Friday meeting:

Concerning the below wire headline, the obvious question takes us back to… one wonders just how?

A friendly reminder of what will happen:

Demand will exceed supply. Any price cap must come along with hard curtailment policies that cut demand. pic.twitter.com/81UQqyaAPv

But back to reality, Hungary’s Szijjarto said it best upon entering the meeting: “This morning … we will do our utmost to make Brussels finally understand that gas supplies are not an ideological or political issue, but one of hard-core physical reality.”