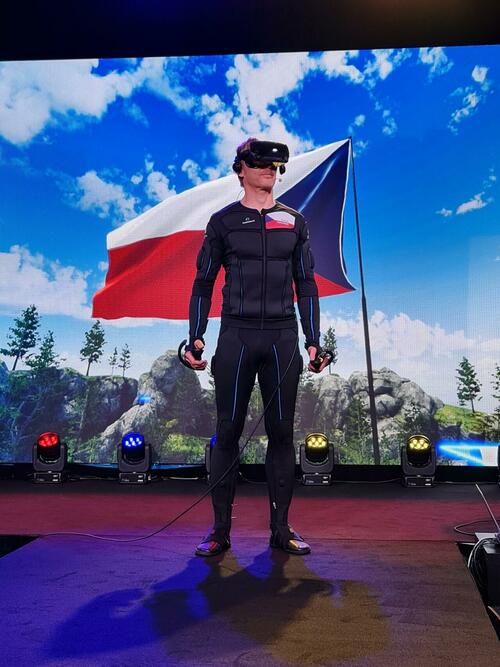 Virtual reality suit maker “Teslasuit” has a human-to-digital interface full-body suit with 90 electrodes designed to trick the body into feeling anything from a hug to raindrops to even the impact of a gunshot. The suit user can strap on VR goggles to ‘touch’ objects in the metaverse.

National Enquirer spoke with Teslasuit VP Paul Nickeas earlier this year about the suit’s “wide range of realistic sensations from the feeling of a raindrop to the impact of a gunshot.”

“The Teslasuit works via biometry, haptics and motion capture, with the wearer being calibrated via a gaming PC, so can be propelled into extended or virtual reality.

“Obviously the use cases are truly far-reaching – from medical rehabilitation, to training for dangerous work scenarios in a safe to fail environment.

“We are extremely excited about how our technology can be utilised for all aspects of the metaverse from gaming, training to now fashion.”

BBC’s Sarah Cox experienced the world’s first “digital hug” while wearing the suit even though the man on the other end was across the room — she felt the hug via the suit’s electrodes.

“I could feel it all down my back, and on my shoulders, and on my stomach … and it’s just really exciting,” Cox said.

Teslasuit (unaffiliated with Elon Musk’s Tesla Motors) was never designed for hugs nor something more intimate such as sex. However, the sex industry has been quickly moving into VR as lovemaking could take a futuristic sci-fi turn with these suits.

“Users might go online, chat with a sex worker via webcam, agree on terms, and then synchronize their Teslasuits for a completely tactile sexual experience – all the while being thousands of miles away,” The Future of Sex’s Ben Barnes wrote.

“Once they get hold of suits like these, they will hack them for sex or build sensors for erogenous zones.”

With how things are going and the billions of dollars being poured into the metaverse by mega-corporations, there’s no doubt within this decade that some of the human population will be using VR for work, education, and/or sex. It seems wearing full-body haptic suits might also be part of the VR experience.