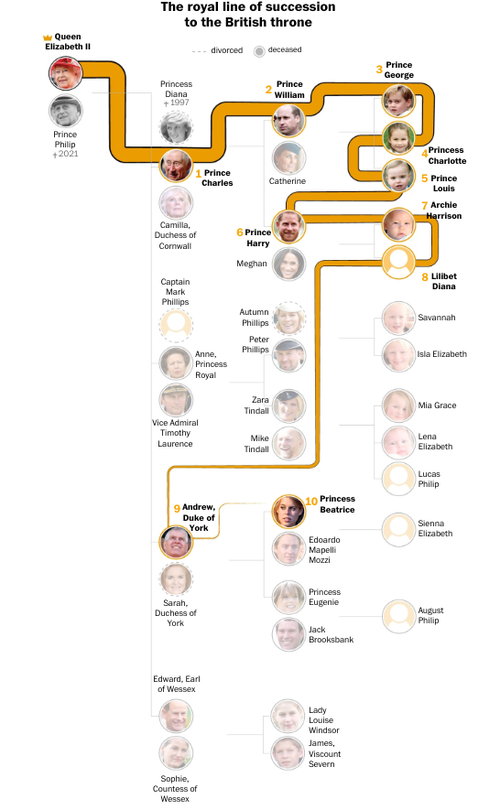 A statement from the King reads:

The death of my beloved Mother, Her Majesty The Queen, is a moment of the greatest sadness for me and all members of my family.

We mourn profoundly the passing of a cherished Sovereign and a much loved Mother. I know her loss will be deeply felt throughout the country, the Realms and the Commonwealth, and by countless people around the world.

During this period of mourning and change, my family and I will be comforted and sustained by our knowledge of the respect and deep affection in which The Queen was so widely held.

Here’s the royal line of succession to the British throne:

Watch a live feed of the developments following the Queen’s death.

The Queen died peacefully at Balmoral this afternoon.

The King and The Queen Consort will remain at Balmoral this evening and will return to London tomorrow. pic.twitter.com/VfxpXro22W

Earlier in the day, Buckingham Palace issued a rare statement that said the Queen was “under medical supervision” and doctors were “concerned” for her health.

At 96, she was Britain’s longest-serving monarch, stretching over seven decades. She represented stability for the UK in a postwar era.

The Queen took the throne when Winston Churchill was in power. Her seven-decade reign saw the decolonization of the British Empire in Asia and Africa. Her popularity has kept her in power for many years.

She became the longest-serving British monarch in 2015, surpassing her great-great-grandmother, Queen Victoria.

In global history, the Queen was the second-longest reigning monarch, outdone only by French King Louis XIV, who served as monarch for more than 72 years after taking the throne at age four and dying in 1715.

“Inevitably, a long life can pass by many milestones — my own is no exception — but I thank you all and the many others at home and overseas for your touching messages of great kindness,” the Queen said in June.

Buckingham Palace released a statement saying after “further evaluation” on Thursday morning, doctors for Queen Elizabeth II are “concerned for Her Majesty’s health.”

“Following further evaluation this morning, The Queen’s doctors are concerned for Her Majesty’s health and have recommended she remain under medical supervision,” the statement read.

The statement continued: “The Queen remains comfortable and at Balmoral.”

On Wednesday night, the Queen, who is 96, postponed her Privy Council meeting after being advised by doctors to rest.

Earlier in the week, the Queen appointed Liz Truss to form a new administration as the new leader of the Conservative Party. She met with outgoing PM Boris Johnson, who offered his resignation earlier on Tuesday, ending his time in office.

The meeting between the Queen, Truss, and Johnson would’ve occurred in Buckingham Palace, but the ceremony was held in Balmoral Castle in Scotland due to the monarch’s mobility issues.

“The whole country will be deeply concerned by the news from Buckingham Palace this lunchtime,” Truss tweeted Thursday.

“My thoughts — and the thoughts of people across our United Kingdom — are with Her Majesty The Queen and her family at this time,” she added.

The whole country will be deeply concerned by the news from Buckingham Palace this lunchtime.

My thoughts – and the thoughts of people across our United Kingdom – are with Her Majesty The Queen and her family at this time.

Reports indicate the Queen’s family has traveled to Balmoral.

PRINCE CHARLES AND CAMILLA HAVE TRAVELLED TO BALMORAL TO BE WITH THE QUEEN. THEY WERE STAYING NEARBY AT BIRKHALL ON THE ESTATE – ITV REPORTER https://t.co/vwyuvlcwEC

Daily Mirror says a Royal helicopter landed on the grounds of Balmoral.

“It comes as members of the Royal Family are racing to see the Queen after the palace made a rare announcement about her health,” the British newspaper said.