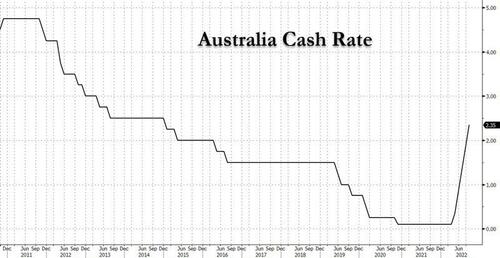 Australia Is First Central Bank To Warn Pivot Is Coming

There is a reason why despite fundamentals, yields and newsflow screaming for lower prices, US equities simply refuse to sell off: it’s because investors know that the moment the Fed pivots dovish and capitulates on its tightening cycle (a move which could take place at any moment since it is as much political as it is financial), risk will explode limit up. And so, even though the US is sliding into a recession – or rather because the US is sliding into a recession – stocks remain sticky to the upside, waiting for the inevitable pivot.

And an advance look of what said pivot would look like came this morning from Australia, where bond yields tumbled and stocks soared after the country’s top central banker opened the door on Thursday to slowing the bank’s policy tightening after five rate increases in as many months, sparking a rally in bonds as markets scaled back bets on further aggressive moves.

Earlier this week, the RBA lifted interest rates by half a point on Tuesday to a seven-year high of 2.35%, bringing the increase since May to a steep 225 basis points.

In a speech on the policy outlook, Reserve Bank of Australia Governor Philip Lowe said further rate increases would be needed to contain inflation but the RBA Board was not on a pre-set path and was aware rates had already risen sharply.

“We are conscious that there are lags in the operation of monetary policy and that interest rates have increased very quickly,” said Lowe adding that he recognizes that “all else equal, the case for a slower pace of increase in interest rates becomes stronger as the level of the cash rate rises.”

Lowe also commented that demand has to grow more slowly to bring it back in line with supply and there is a significant demand element to higher inflation, while he added it is very possible that wage growth does not pick up much further and said quantitative tightening is not on the agenda.

Lowe emphasised the Board was committed to bring inflation back to its 2%-3% target band, having been surprised by this year’s spike in consumer prices to a 21-year peak of 6.1%.  He said it was important the current high inflation not get built into expectations for price- and wage-settings, especially since the Australian housing market faces an apocalypse should rising rate expectations become ingrained, and added that, so far, measures of expectations were still consistent with a return to the 2%-3% band.

Lowe conceded the RBA had been badly wrongfooted by the surge in inflation in recent months and said it was important for the bank to learn from those mistakes. Australia’s Labor government in July launched an independent review into the RBA’s structure and policies, and how it handled emergency stimulus during the pandemic.

The central bank has come in for much criticism on its forecast mistakes, particularly Lowe’s prediction in late 2021 that rates would likely not rise until 2024.

On Thursday, Treasurer Jim Chalmers was forced to reject calls for Lowe to be fired, saying he was not going to take “pot shots” at the independent central bank. Asked about the criticism after his speech, Lowe said: “I have no plans to resign. Look at how much better the economy is now.” Maybe check back on the economy in a few months how much better it is then.

Just the mere hint of a possible slowdown saw odds on another hike of 50 basis points in October surge, with rates now seen more likely to reach 3.0% by December, rather than 3.25%. Three-year bond yields tumbled 15 basis points to 3.03% before bouncing modestly and the Australian dollar lost 0.5% to $0.6732 .

Lowe’s comments echoed a similar dovish comment from Brainard yesterday who said that at some point “risks will become more two-sided…at some point,” that with many global central banks raising rates at a historically fast clip that it could “…create risks associated with overtightening” associated with “uncertainly around the pace at which the effects of tighter financial conditions are working their way through aggregate demand.”

The commentary from Brainard, and subsequently Lowe, was enough to spark a massive short squeeze with Nomura’s Charlie McElligott saying that “you are again seeing how much market conditioning has been built over the past 15 years + of central banks being so tilted “asymmetrically DOVISH,” again almost “willing” the “dovish pivot” to occur, and for risk-assets to then rally in conjunction.” And at some point said Dovish pivot will take place not just in Australia but in the US too… just not before the midterms.