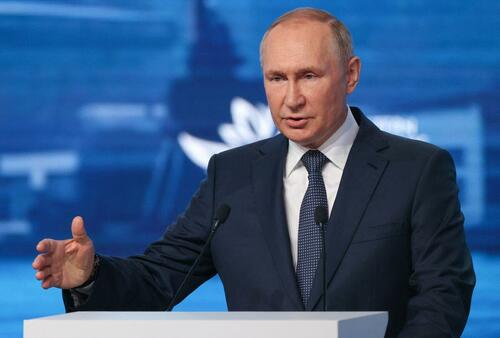 Russian President Vladimir Putin blasted the ongoing “sanctions fever” in the West in a wide-ranging speech before the Eastern Economic Forum in Vladivostok, in the country’s far east, where as we described earlier the Chinese delegation was the largest in attendance. Top Chinese legislator Li Zhanshu was in attendance when the Russian leader stressed, “no matter how much someone would like to isolate Russia, it is impossible to do this.”

Instead, he said the blowback from EU and US-led sanctions and attempts at decoupling from Russian fossil fuels is wrecking lives in the West. “Now we are seeing how production and jobs in Europe are closing one after another,” Putin said, stressing that this is happening as “Western elites, who would not, or even cannot acknowledge objective facts.”

His theme, like in a number of prior major speeches, was Western elites’ inability to recognize the inevitable shift from a unipolar to multipolar world (literally the name for this year’s forum is “On the Path to a Multipolar World.”), or away from “the world order that benefits only them, forcing everyone to live under the rules, which they invented and which they regularly break and constantly change depending on the situation,” he said according to a state media translation.

That they “would not, or even cannot acknowledge objective facts” about global changes reveals their “growing detachment” from the common people they claim to represent. And yet now, European populations could “freeze” while being denied crucial Russian energy by leaders who shortsightedly want to lash out in emotional response to the Ukraine invasion:

“The [coronavirus] epidemic has been replaced by other global challenges that threaten the entire world,” Putin told the Eastern Economic Forum in Russia’s Pacific port city of Vladivostok.

“I’m referring to the West’s sanctions fever,” he said, criticizing “blatant and aggressive” attempts to “subjugate” countries that have not imposed economic restrictions on Russia.

He dismissed as “nonsense” the widespread allegations that Russia using using gas as an energy weapon, saying it’s as simple as releasing the necessary parts for the safe and proper functioning of pipelines operated by Gazprom.

“Give us turbines and we’ll turn on Nord Stream tomorrow, but they won’t give us anything,” Putin told the audience, further addressing the latest global headlines of an EU-mulled price cap on Russian oil and gas, calling the proposal “another stupidity.” He suggested the dilemma remains simple:

“There are contractual obligations and if there are any political decisions that contradict them, then we simply won’t fulfill them. We won’t supply anything at all if it contradicts our economic interests, in this case. We won’t supply gas, oil, coal or heating oil.”

Part of the aforementioned objective facts Western leaders refuse to acknowledge is that nations importing Russian energy “are in no position to dictate their will.” Putin said he’s still “confident we haven’t lost anything and won’t lose anything [after invading Ukraine]. Our main gain is strengthening sovereignty.”

“Let them come to their senses,” Putin emphasized. And yet in remains that “The EU authorities are denying European businesses accessible raw materials, energy and markets.” And so plummeting standards of living and the rising inflation now being experienced by Europeans – especially headed into the Winter months – will continue to be sacrificed to American interests until these leaders do finally come to their sense, the Russian leader explained.

“It will be no surprise when the market shares of European businesses, both in the continent and globally, will be taken by their American patrons. When they pursue their interests, they don’t limit themselves or shy away from anything.”

Interestingly, he addressed the status of the Nord Stream 2 Russia to Germany pipeline which was halted before it ever came online in the wake of the Ukraine crisis, saying Moscow remains “ready” to begin pumping gas through NS2 if the other side is willing:

“We are not building anything for no reason. We have received and perfected the necessary technology. We will turn on Nord Stream 2 if necessary,” Putin said.

According to him, Nord Stream 1 is currently virtually closed, and the West claims that Moscow is using the gas pipeline as an energy weapon. “Nonsense. We supply as much as our partners need – we fulfill whatever they put in the application,” Putin added.

Acknowledging the large Chinese delegation presence, and the attendance of the number three top Chinese government official for the forum, Putin said “I hope to see Xi Jinping in Uzbekistan soon.”

Russian energy giant Gazprom earlier this week issued a rather provocative video aimed at Europe and what it can expect for the coming winter:

P.S. It is worth reminding commentators that it was the EU that imposed sanctions against Russia, and not vice versa. pic.twitter.com/htvkG4eiFL

Subsequently, it’s been confirmed by Kremlin officials that “Putin and Chinese President Xi Jinping to meet next week at summit in Uzbekistan,” according to ABC News. The two large nuclear-armed nations just wrapped up a week of joint war games, among multiple other nations represented, at Vostok 2022 in the same far eastern region of Russia.