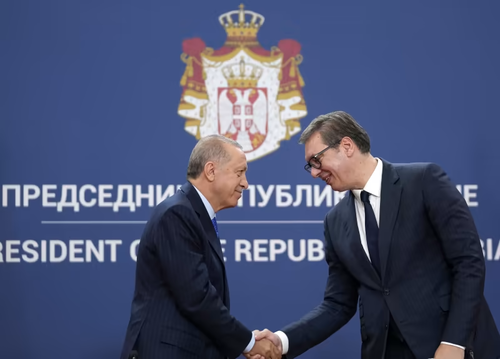 By now it should be no surprise to anyone that President Recep Tayyip Erdogan tends to antagonize both sides of the Russia-West divide, all the while positioning himself as a “go between” so that Turkey gets just what it wants. This was very much on display throughout past years of the war in Syria, also evident with its controversial Russian S-400 acquirement.

In but the latest salvo and breaking ranks from the NATO line on the matter, Erdogan on Wednesday charged the West with provoking Russia over Ukraine. He at the same time touted that his country has maintained a “balance” in policy approach and perspective concerning the war, and US-EU punitive sanctions.

In addressing a news conference during a meeting with Serbian President Aleksandar Vucic in Belgrade, Erdogan went so far as to say that he understands Vladimir Putin’s decision to cut off Europe from Russian gas, shuttering the Nord Stream pipeline.

As AFP reports of the contrarian statements from the head of NATO’s second largest military:

He told reporters on a visit to Belgrade that he understood Putin’s decision to cut off natural gas supplies to Germany via the Nord Stream pipeline.

“I can say very clearly that I do not find the attitude of the West — no need to mention names — to be correct, because it is a policy based on provocations,” Erdogan said.

“As long as you try to wage such a war of provocations, you will not be able to get the needed result,” he added while standing alongside Vucic.

He summarized Turkey’s stance throughout the crisis as follows: “As Turkey, we have always maintained a policy of balance between Ukraine and Russia. From now on, we will continue to follow that balanced policy,” he was quoted as saying. As an example he touted the recent UN-brokered Black Sea export ‘safety corridor’, monitored from Istanbul, through which Ukrainian food exports have begun to flow.

According to a Turkish media description of his Wednesday statements from Belgrade:

Erdoğan added that it does not seem the Russia-Ukraine war will end “anytime soon,” adding: “I say to those who underestimate Russia, you are doing it wrong. Russia is not a country that can be underestimated.”

The president also reiterated Ankara’s balanced policy between Russia and Ukraine to help solve the crisis. The Turkish policy of keeping lines of diplomacy open with Russia has also resulted in Türkiye hosting the highest-level meetings of officials from Moscow and Kyiv since the war begin.

Stressing that Russia cannot be “underestimated” is an almost unprecedented admission by the head of a NATO member country. But Russian-ally Serbia welcomed the commentary which contradicts everything currently coming from European officials…

“I appreciate that President Erdogan has always pressed for peace, stability, and a solution”

In August, Erdogan made his first visit to war-ravaged Ukraine, meeting Secretary-General Antonio Guterres and President Volodymr Zelensky in the western of Lviv. Trying his hand at being a mediator and peace-broker, he said he discussed possible scenarios of ending the war between Ukraine and Russia, and even offered to present an outline for negotiated settlement to Putin. However, these efforts have come to nothing so far, as both sides have since reiterated refusal to even sit down at the same table before serious concessions are made.