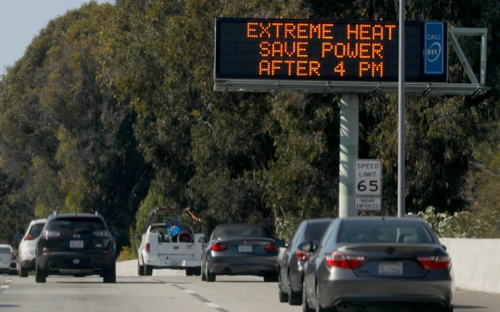 Did Newsom’s Emergency Alert Save Californians From Rolling Blackouts?

After a week of daily grid emergencies, California officials may have helped avoid widely-threatened rolling blackouts – which affected just 75,000 households across three counties – after Residents were told throughout the week (including Tuesday) to start conserving energy between 4pm and 9pm. And while Californians clearly responded to the warnings, it may have been an Emergency Alert text sent to more than half-a-million customers that finally avoided mass shutdowns yesterday.

At approximately 3:20 Tuesday afternoon, system demand across the state hit an all-time high of 50.6K megawatts, which rose to 51.4K right before 4pm. Then, at approximately 4:15 p.m. local time, demand dipped – as Californians clearly reduced electricity usage, while solar customers with battery backups initiated automatic load shifting programs – running their homes off the battery instead of the grid (typically done daily to avoid the more expensive 4pm-9pm peak energy pricing).

This part of the trend is not new – as a dip around can be observed every day for the last week. A second dip occurred at 5pm or so.

But then as Bloomberg notes, California officials sent an emergency text message around 5:45 warning approximately 525,000 homes and businesses that if they don’t conserve power immediately, “power interruptions may occur.”

We’re in a #FlexAlert, California.

Do your part to save energy from 4-9pm:
🌡️ Set your A/C at 78° or higher, if health permits
🚫 Avoid major appliance use
💡 Turn off unnecessary lights

— Office of the Governor of California (@CAgovernor) September 7, 2022

And down went energy demand – plunging 1.2 gigawatts between 5:50 and 5:55 pm, with the decline continuing to 46 megawatts when the grid emergency was canceled without widespread rolling blackouts.

“Thank you to everyone who saved power — coming together to keep the lights on for each other is the California way,” said Governor Newsom’s office in a tweet. “But, we aren’t out of the woods yet. We will see continued extreme temps this week and if we rallied today, we can do it again.”

Temperatures on Tuesday hit numbers not seen in more than 150 years, with the state Capitol of Sacramento reaching 116 degrees for the first time since 1849. To the South, Burbank and Riverside are expected to hit 109 degrees today.