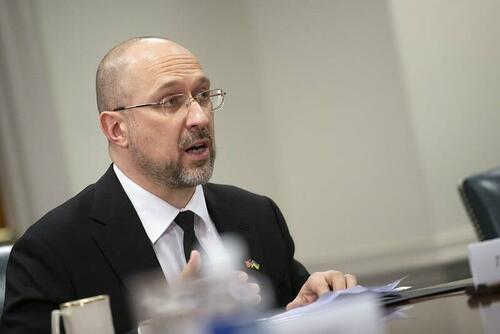 Authored by by Kyle Anzalone & Will Porter via The Libertarian Institute,

Shmyhal made the proposal while attending the EU-Ukraine Association Council summit in Brussels. “We need more modern weapons, such as air defense, missile defense and ship defense,” he said. Shmyhal additionally requested aircraft and armored vehicles.

The government in Kiev has relied on America and its European partners to fund and arm its soldiers as they fight to repel the invading Russians, with Washington sending tens of billions in weapons and direct economic support.

In April, Kiev and Moscow had worked out broad details for a deal to end the war, but Ukraine’s President Volodymyr Zelensky was pushed to keep fighting by UK Prime Minister Boris Johnson.

In addition to the Western support for Ukrainian forces, the US and its allies have also launched an economic war against Moscow. The sanctions regime was intended to cripple the Russian economy and halt the Kremlin’s machine, but has largely backfired, with Europe now plagued by high energy prices as Russia finds alternative buyers for its oil and gas.

Along with requesting more weapons, Shmyhal said Kiev could help ease high gas prices on the continent. “30 billion cubic meters is what we have in our gas stores, and we can offer some of it to our European partners in order to replace the Russian Federation in the unstable market,” he said.

Last week, the burgeoning energy war intensified when the G7 announced it would place a maximum price on Russian oil. The Kremlin responded by announcing the indefinite closure of the Nord Stream 1 pipeline, sending gas prices skyrocketing by as much as 30% on Monday.

Gazprom with an epic troll of the EU countries.

“And the winter will be big …” pic.twitter.com/5pvZ2hqi1B

Borrell suggests the EU is committed to supporting Ukraine’s war effort no matter what happens in the coming months. “We will provide our support politically, financially, humanitarian and militarily as long as it takes and as much as needed,” he said.