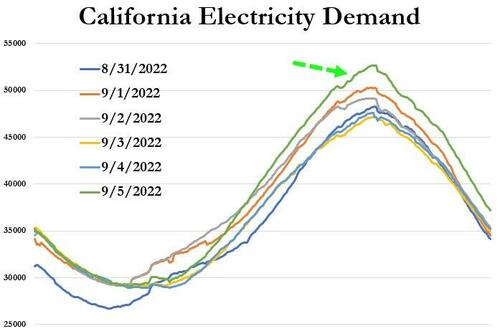 The prospect of outages did not bother Californians. Many customers continued to use appliances, air conditioning, and at-home electric vehicle chargers despite conservation pleas from California Independent System Operator (CAISO).

Monday was the fifth straight day CAISO warned about a blistering heat wave that pushed its electric system to the brink. Even though no widespread blackouts were reported, electricity demand surged to one of the highest levels (52,646 megawatts), outlining how customers widely ignored conservation calls.

A Reuters report showed soaring demand for electricity sent power prices in the state to the highest levels since August 2020.

Power prices at the Palo Verde hub in Arizona and SP-15 in Southern California rose to $850 and $505 per megawatt hour, respectively. That was their highest levels since hitting record highs of $1,311 in Palo Verde and $698 in SP-15 in August 2020 when the ISO last imposed rotating outages.

And since Californians aren’t conserving electricity as demand steadily rises, this could mean CAISO would instruct utilities to start imposing rotating outages if duress on the grid continued — maybe then, after the fact, customers will get the message to conserve.

Elliot Mainzer, CEO of CASIO, said Monday: “We need a reduction in energy use that is two or three times greater than what we’ve seen so far as this historic heat wave continues to intensify.”