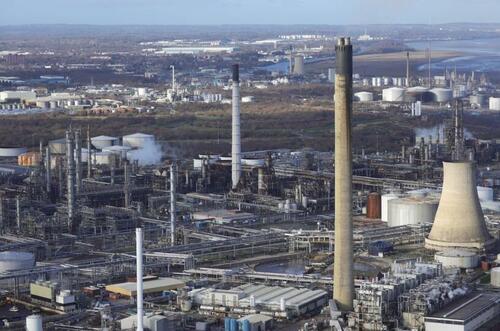 As many as six in 10 British manufacturing businesses are at risk of closure, according to a recent survey as soaring energy bills and the wider cost-of-living crisis has owners feeling the squeeze.

MakeUK, a manufacturing lobby organization in the U.K., announced on Saturday that 42 percent of manufacturers have seen their electricity bills rise by 100 percent in the past 12 months, and 32 percent have also seen their gas bill double.

The rise in prices has seen 13 percent of manufacturers already reduce their hours of operation, and 12 percent have been forced to make job cuts as a direct result of increased energy bills. The majority of businesses warn that if bills continue to increase this year and rise by over 50 percent as expected, closures and redundancies “will become inevitable.”

Out of control energy bills are now business threatening for 60% of manufacturers.

We’re calling on Government to look at introducing an Industry Price Cap to freeze energy bills at an agreed rate. pic.twitter.com/Xhto87bZVL

The lobby group issued on Monday a proposed 100-day plan for the incoming prime minister, Liz Truss, who was announced on Monday.

It includes a call for an emergency budget; a demand to commission the Migration Advisory Committee (MAC) to review the Shortage Occupation List (SOL), which outlines key job roles in high demand in the U.K. to allow businesses to recruit from overseas more easily; and an overhaul of the Apprenticeship Levy “to ensure British people are among the most productive and highly skilled workers in the world.”

Last week, U.S. investment bank Goldman Sachs predicted that inflation could rise to an eye-watering 22 percent in the U.K. next year if the current rise in wholesale energy prices continues as expected.

The energy price cap, which limits how much energy companies can charge domestic consumers in the U.K., could rise by more than 80 percent at its next review in January, which the bank warns would “imply headline inflation peaking at 22.4 percent.”

Inflation in Britain reached double digits for the first time since the 1980s in July, and if Goldman Sachs estimates were to be realized, the cost of living in the U.K. would come close to hitting the country’s post-war record of 24.5 percent inflation set in August 1975.