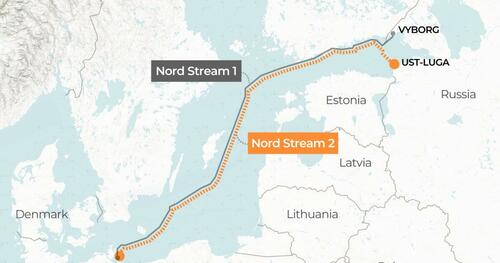 Benchmark EU NatGas futures jumped as much as 35%, and electricity prices across the bloc soared. The unexpected cutoff also sent European equities into a downward spiral — the euro hit a two-decade low.

Gazprom decided on late Friday not to restart the Nord Stream pipeline after three days of maintenance due to an oil leak detected at a turbine that helps pump NatGas. Traders are left with many uncertainties, such as no timeline on when Russia restarts the pipeline.

Gazprom has released a photo of the alleged “oil leak” that’s going to keep the Nord Stream 1 gas pipeline closed for now. pic.twitter.com/91jH8P9qLi

Europe’s politicians are now rushing to pass additional emergency measures: Sweden and Finland will support struggling utilities with collateral requirements, a move to prevent a “Lehman-style” bust. Energy ministers from across the bloc will hold a meeting at the end of the week to discuss NatGas price caps and a suspension of power derivatives trading.

Moscow’s move will spark continued energy hyperinflation across Europe that will pressure households deeper into energy poverty — triggering even more discontent. Tens of thousands of Czechs protested in Prague this past weekend against European sanctions on Russia that have backfired, resulting in a cost-of-living crisis for ordinary people.

“Obviously, life is getting worse for people, businessmen, and companies in Europe,” said Dmitry Peskov, President Vladimir Putin’s spokesman. He added, “Of course, ordinary people in these countries will have more and more questions for their leaders.”

Peskov’s comments are the starkest yet by the Kremlin that the EU must roll back sanctions in exchange for Russian NatGas, or it’s going to be a very tough winter for the energy-stricken continent.

And the deputy chair of Russia’s security council, Dmitry Medvedev, said Berlin was “acting as an enemy of Russia” by supporting sanctions against Moscow and arming Ukrainians. “They have declared hybrid war against Russia … this old man acts surprised that the Germans have some little problems with gas,” he said.

Even though the EU has been rapidly building up NatGas stockpiles, those reserves could be drained during the heating season in a matter of months.

“Given the gas supply tightness, one cannot exclude mandatory gas curtailment for non-essential industries or even’ rolling gasouts’ this winter depending on the weather,” JPMorgan analysts wrote in a note.

Joachim Klement, head of the strategy, accounting, and sustainability at Liberum Capital, believes “the end of Russian gas deliveries to Europe mean that the German economy as well as the eurozone economy will drop into recession immediately.”