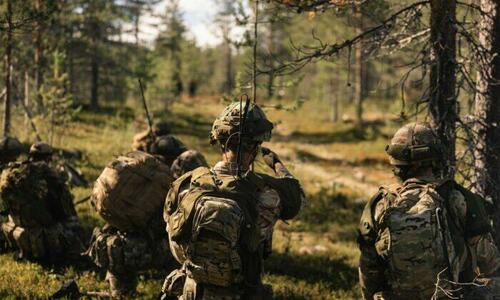 Authored by Alexander Zhang via The Epoch Times,

British troops have taken part in a training exercise alongside Swedish and Finnish armed forces as the two Nordic countries prepare their accession to the NATO military alliance.

Exercise Vigilant Knife, which took place in northern Finland from Aug. 29 to Sept. 2, was intended to further strengthen the interoperability of the three armed forces, the UK Ministry of Defence said.

UK Defence Secretary Ben Wallace said: “Whilst there is war in Europe, it is more important than ever to strengthen our international partnerships. We welcome Finland and Sweden’s application to join NATO and will continue to exercise together so we are ready to face shared security challenges.

“Exercise Vigilant Knife is an invaluable opportunity for UK personnel to develop their skills and experience of warfighting in cold weather conditions, enabling them to be effective on the battlefield alongside their Finnish and Swedish counterparts.”

Around 80 British army personnel took part in the exercise, travelling from the island of Santahamina in the south of Finland where they are undertaking a three-month training deployment as part of a security agreement between the UK and Finland.

As a light infantry company, British personnel provided anti-tank, sniper, and reconnaissance capabilities to the exercise and were primarily involved in both offensive and defensive actions to test the readiness of the Finnish forces alongside the Swedish unit.

The UK signed mutual security assurance declarations with Sweden and Finland in May. The two countries are also members of the UK-led Joint Expeditionary Force, a coalition of 10 nations which cooperate to maintain the security of Northern Europe.

On July 5, NATO’s 30 allies signed an accession protocol for Finland and Sweden, allowing them to join the alliance once parliaments ratify the decision, the most significant expansion of the alliance since the 1990s.

Russian President Vladimir Putin has warned that the Kremlin would respond in kind if NATO troops and infrastructure are deployed in the two Nordic countries.

Finland shares a lengthy land border with Russia, while Sweden shares a maritime border with Russia. The Nordic nations had resisted joining NATO for decades until the Russian invasion of Ukraine drastically altered the security situation in the region.