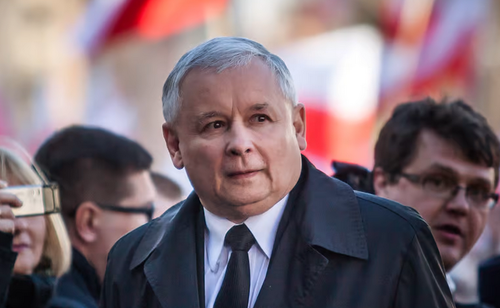 Germany has responded after Poland demanded $1.32 trillion in reparations over losses suffered during WWII.

On Thursday, Poland’s Deputy Prime Minister Jaroslaw Kaczynski said that Warsaw would officially demand reparations from its largest trade partner and a fellow member of both the EU and NATO.

Poland’s new estimate tops the $850 billion estimate by a ruling party lawmaker from 2019. The ruling Law and Justice (PiS) party has repeated calls for compensation several times since it took power in 2015, but Poland hasn’t officially demanded reparations. –Reuters

“The sum that was presented was adopted using the most limited, conservative method, it would be possible to increase it,” said Kaczynski, leader of Poland’s Law and Justice (PiS) party during a news conference. “Germany has never really accounted for its crimes against Poland,” he added.

Kaczynski – who is Poland’s chief policy maker, and Prime Minister Mateusz Morawiecki, attended a ceremonial release of a long-awaited reparations report held at the Royal Castle in Warsaw, which was rebuilt from wartime ruins.

The release of the three-volume report was the focus of national observances of the anniversary of the war that began Sep. 1, 1939, with Nazi Germany’s bombing and invasion of Poland that was followed by more than five years of brutal occupation.

The head of the report team, lawmaker Arkadiusz Mularczyk, said it was impossible to place a financial value on the loss of some 5.2 million lives he blamed on the German occupation.

He listed losses to the infrastructure, industry, farming, culture, deportations to Germany for forced labor and efforts to turn Polish children into Germans.

A team of more than 30 economists, historians and other experts worked on the report since 2017. The issue has created bilateral tensions.

The war was “one of the most terrible tragedies in our history,” President Andrzej Duda said during early morning observances at the Westerplatte peninsula near Gdansk, one of the first places to be attacked in the Nazi invasion. –ABC News

Germany hit back in a statement from its foreign ministry, which said that the question of reparations was ‘concluded’ long ago with Poland renouncing further claims, and that the German position that compensation was paid to East Bloc nations in the years after the war, has not changed.

Poland’s combative stance towards Germany has intensified after Russia’s invasion of Ukraine.

In 1953, Poland’s then-communist rulers relinquished all claims to reparations amid pressure from the USSR, which wanted to free the soviet satellite of East Germany from any liabilities. According to Poland, the agreement is invalid because Poland was unable to negotiate fair compensation, according to Reuters.

Donald Tusk, leader of Poland’s biggest opposition party Civic Platform, said on Thursday that Kaczynski’s announcement was “not about reparations”.

“It’s about an internal political campaign to rebuild support for the ruling party,” he said.

Germany’s top official for German-Polish cooperation, Dietmar Nietan, said in a statement that Sept. 1 “remains a day of guilt and shame for Germany that reminds us time and again not to forget the crimes carried out by Germany” that are the “darkest chapter in our history.”