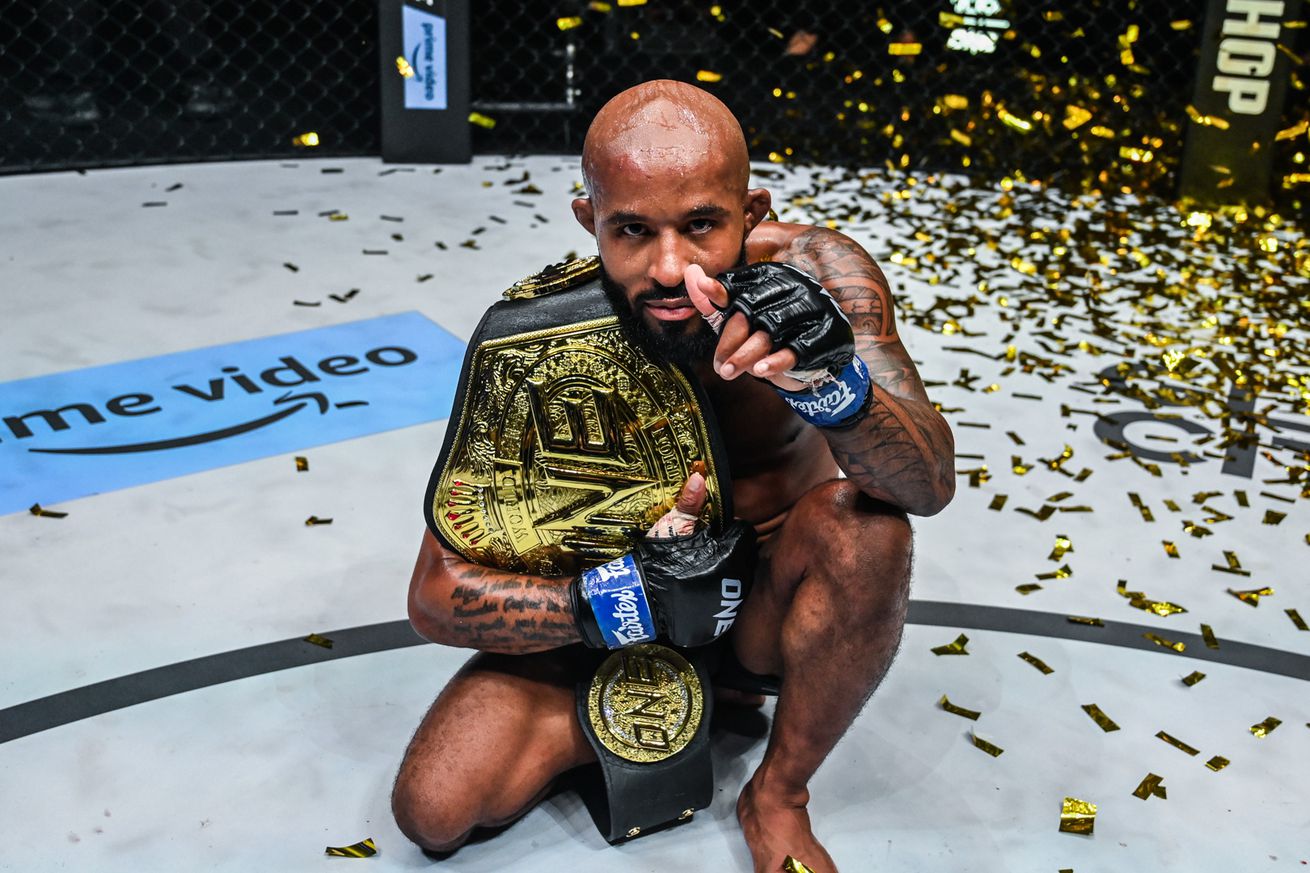 At 36 years old and already one of the greatest fighters of all-time, Demetrious Johnson is still adding layers to his game.

This past weekend, Johnson reclaimed the ONE Championship flyweight title with an incredible fourth-round flying knee KO of Adriano Moraes at their rematch ONE on Prime 1, and he did so by showing some new wrinkles to his game.

“One of the biggest things going into this camp, Matt [Hume] told me, ‘Dude, we can be the same DJ that you’ve always shown, or we can show what you really do in the gym. You’re athletic enough to do stuff like that. You’re athletic enough to be quick. You are quick. But when you’re like these [hands up], you’re not quick.’ So that was a little bit of it,” Johnson said on The MMA Hour. “But I’m just at the point of my career where I’m just having fun.

“Even when I lost the first time against Adriano, I did all the media obligations, told them all, ‘Dude, I got caught with the uppercut and blasted in the face with a f****** knee. What can you do?’ But this one, I was on the better end of it, giving him the knee. Nothing but respect to Adriano. I’m just grateful I was able to go out there and showcase a different skill set.”

The win was Johnson’s first knockout victory since his 2016 demolition of Henry Cejudo, but it wasn’t just the finishing sequence that impressed. Facing an opponent who previously knocked him out, Johnson seemed to have no fear of a similar outcome this time around, fighting with his hands low, even showboating at times, and displaying an almost reckless embrace of forward pressure — an approach that had its own special name.

“Going into the fourth, I was on the stool and cornermen James and Tony were doing an amazing job, and I looked at Matt and I go, ‘Zombie time!’ and just took it to him,” Johnson said. “It was a thing we worked on a lot in training camp, which how I kind of look at it, is just walking forward and covering distance.

“In the gym, I would get lit up. This was probably the hardest training camp that I’ve had when it comes to strictly being disciplined towards a game plan, and I just call it ‘Zombie.’ I go forward, I don’t care what he throws, I’m going to eat it, I don’t give a damn. I just don’t care. In order to get it done, I call it ‘Zombie.’ Because there were times in the gym where I’m sparring rounds, bop-bop-bop, moving, being fast, elusive, and then I won’t get hit zero times. At all. Then, alright, I’m going to be zombie, I’m going to train my eyes and my body to weather that storm, take the shots, eat it, and keep pushing through.”

Johnson went on to say that “Zombie” is not something he would had employed earlier in his career, but said his mindset changed after fighting Rodtang in a mixed rules bout earlier this year. Now, Johnson hopes to showcase more of his full potential inside the cage — potential that has heretofore remained in the gym.

“The biggest regret I have in my career is not filming any of my upbringing in MMA, and the reason I say that is, what you saw, that finishing sequence, is what I deal with every single time I spar Matt,” Johnson said. “That’s how he moves. Angles, lining up the knee, landing the knee — not to my face, to my stomach — that’s how he moves. That’s stuff that I learned from him my whole entire career. When I’m drilling, I’m sparring, or he’s teaching, ‘Oh, that knee was too soon. That knee was too late. That knee was perfect.’

“That’s just the training I’ve done over the years where Matt’s like, ‘You’ve got to wait for the right time and boom, you land it.’

“It’s trying to be perfect and that sequence was pretty much — bop-bop-boom, and then boom — that was money. That sequence, I would say, that’s perfect.”

The win inevitably raises questions about where Johnson sits in the global pantheon of flyweight, especially given that in ONE Championship, the flyweight division is contested at 135 pounds due to the promotion’s rehydration rules. But while Johnson reclaimed the top spot in the MMA Fighting Global Flyweight Rankings, for him, he is not comparing himself to the current crop of UFC 125ers. He’ll leave that up to the fans.

“So I don’t put myself in that category with [Alexandre] Pantoja, [Deiveson] Figueiredo, [Brandon] Moreno, and those guys. I put myself in the category with Aljamain Sterling, Petr Yan, ‘Suga’ Sean O’Malley, Dominick Cruz. Even though I know Aljo said he gets up to 167, and I’m sure when he steps in the octagon he probably weighs like 145, 150, but I’m not weighing 125 pounds.

“I don’t want to make it anymore, I shouldn’t say I can’t. So for me, I see myself as a bantamweight here in America, but over in Asia it’s flyweight. So I’ll just leave it up to the public. You guys think I’m the best flyweight in the world right now, not fighting in America? Dope. That’s awesome. But for me, I’m the champ. I just leave it at that. Y’all decide.”