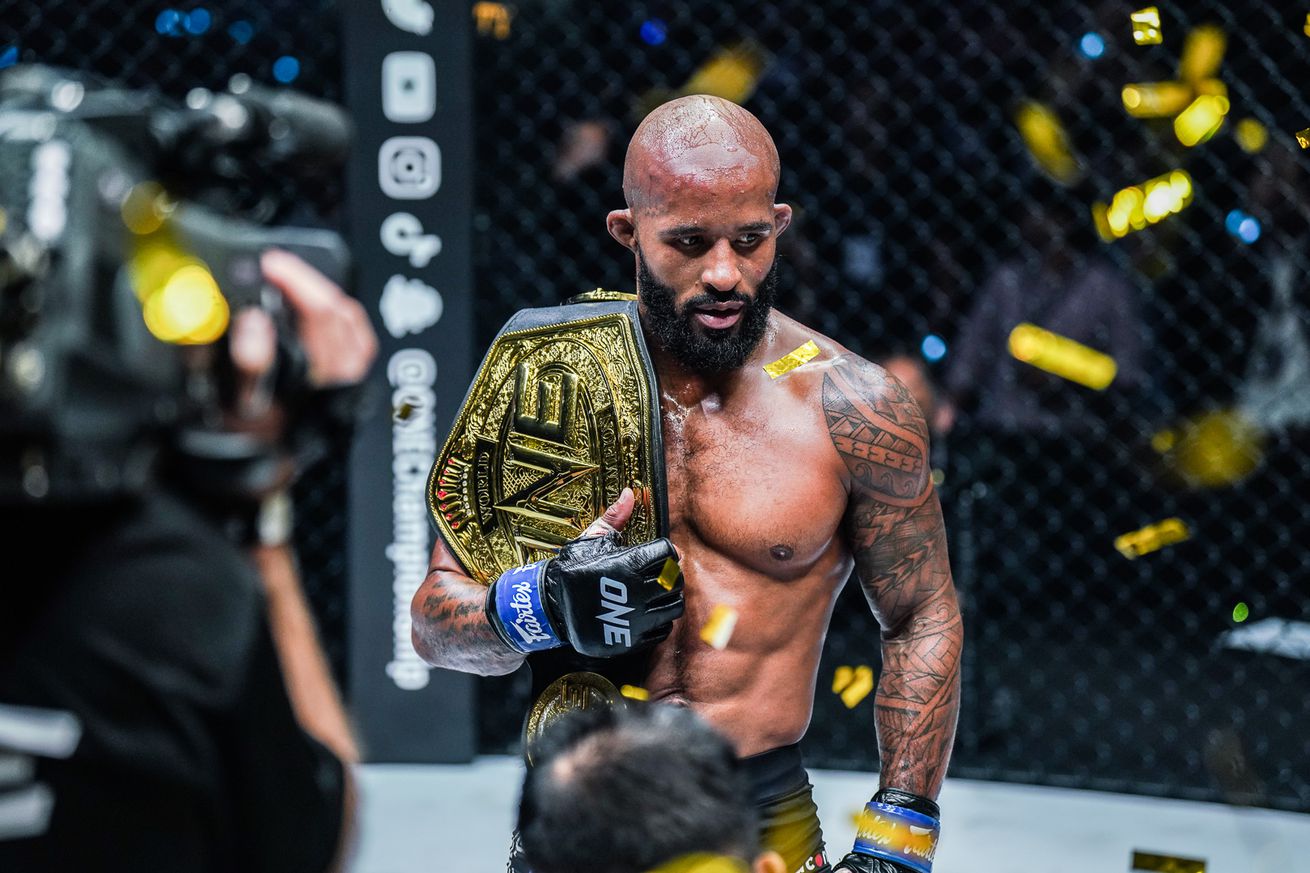 Demetrious Johnson is once again at the top of the mountain and he’s already welcoming his next challenger.

In the main event of ONE on Prime Video 1 in Singapore on Saturday, Johnson avenged the lone knockout loss of his career by finishing Adriano Moraes with a walk-off knee KO in the fourth round to capture the ONE Championship flyweight title. Johnson had previously won a grand prix inside the ONE cage and is best known for his six-year run as the UFC’s flyweight champion.

Johnson was asked whether he’d prefer a trilogy bout with Moraes or a fight with No. 1 contender Kairat Akhmetov in a post-fight interview and for now he is keeping his options open.

“You know, I wouldn’t mind giving Kairat Akhmetov a chance, but it’s up to ONE Championship,” Johnson said. “At the beginning of this, I didn’t even know I was going to get a title shot. I thought after I beat Rodtang I was going to go down to fight whoever was next in line, work my way back up the ladder, but Kairat Akhmetov, mad respect to him, he’s on, like, a five- or six-fight win streak.

“I thought he was going to get the title shot against Adriano, but they called me and said this is who you’re fighting next and I said, ‘OK. Sounds good.’”

Moraes has a strong case for an immediate third fight having defeated Johnson by second-round KO in April 2021. Johnson bounced back with a submission of Rodtang Jitmuangnon in an MMA/muay Thai special rules match this past March before receiving the call to fight Moraes once more.

The argument for Akhmetov being Johnson’s first challenge stems from his impressive 29-2 record and wins in his past five fights. Akhmetov is also a former ONE flyweight champion who holds a title fight win over Moraes from November 2015.

Whatever is next, Johnson took a moment Saturday to appreciate his latest legendary feat.

“It’s up there,” Johnson said when asked where his knockout of Moraes ranks among his favorite moments of his career. “I’ve never done a walk-off knockout. I’ve done a high kick like Mirko Cro Cop, I’ve done a liver shot, I’ve done a right hand against Joseph Benavidez, so like I said, I’m just grateful and blessed to be in the position I am in.

There was symmetry in Johnson’s finish of Moraes as he ended the rematch with an incredible knee knockout, much like Moraes did to Johnson in their first meeting. However, Johnson won’t oversell the poetry of the moment nor will he allow himself to get too high after avenging a loss.

“A knee with a knee, I don’t really think about that,” Johnson said. “I’m just happy and I’m grateful to be healthy enough to go out there and put him away. It was a great fight. He hit me with some good shots. He had me, he was trying to go for a D’Arce, he had me on the ground landing good knees to the head. I knew it was going to be a tough fight. That’s one of the things I love about competing. There’s a part of me where I hate pressure, I hate all of the eyeballs on me. And there’s a part of me that’s like, ‘Yeah, f*** yeah, let’s go and let’s see how hard we can push it. Let’s see if we can push ourselves to that breaking point.

“I had great words with Adriano. At the end of the day, I’m at the point now in my career where I’m just here to have fun. If I win, I win, if I lose, I lose, I’m not going to let the outcomes of the wins or my losses dictate my life. If I was on the receiving end of another knee, I would have the same demeanor and energy right now.”