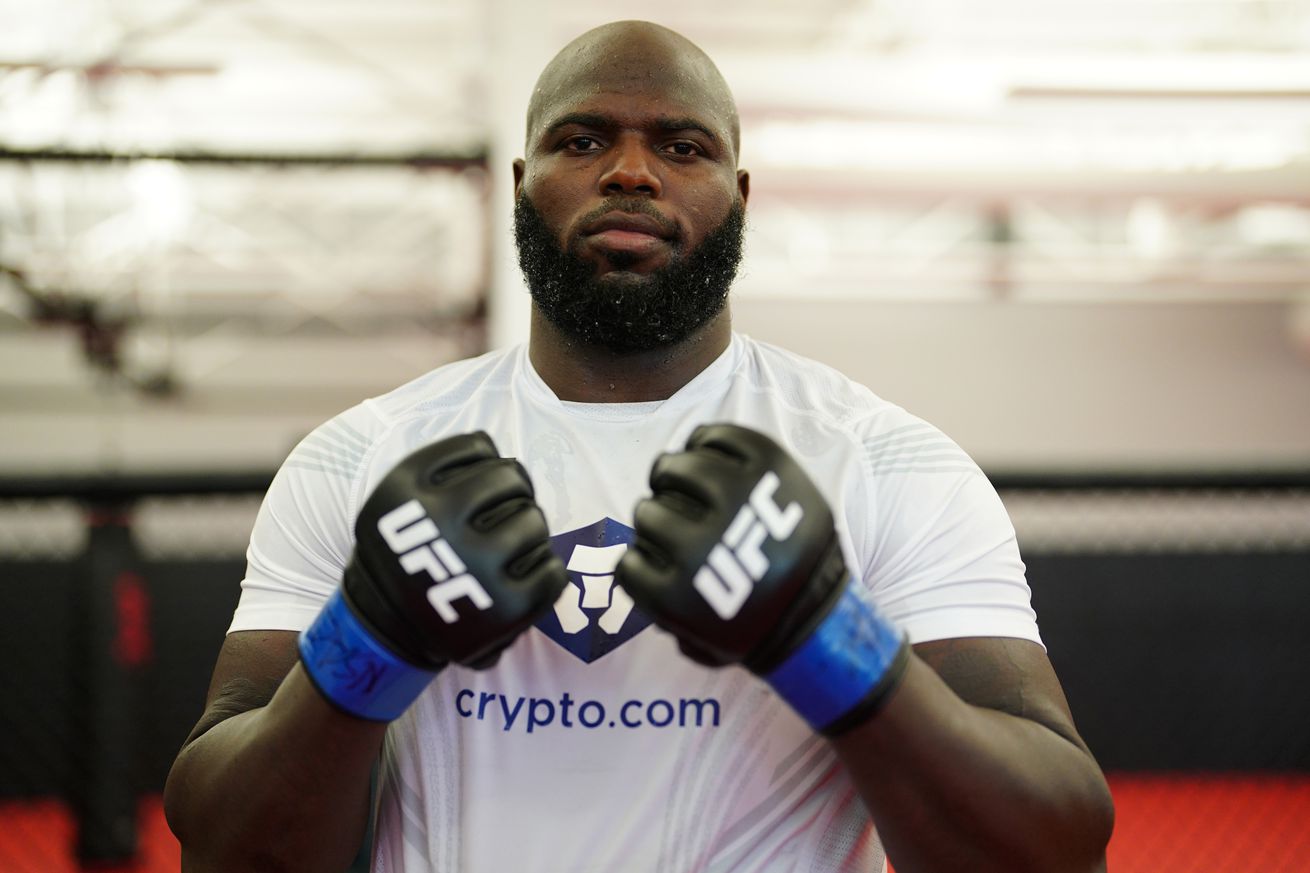 Jairzinho Rozenstruik and Chris Daukaus are set to fight in a battle of ranked heavyweights.

The two meet on Oct. 1 at UFC Vegas 61, with Rozenstruik — the No. 12 heavyweight in MMA Fighting’s Global Rankings — defending his spot against No. 15 Chris Daukaus. Rozenstruik first announced the matchup via social media.

Rozenstruik (12-4) is coming off of a controversial first-round TKO loss to Alexander Volkov in the main event of UFC Vegas 56 this past June. “Bigi Boi” lost his second straight fight and third in his past four outings after referee Herb Dean called for a standing stoppage to the contest that Rozenstruik called “troubling.”

Daukaus (12-5) is also in need of a win after dropping his past two fights. The Philadelphia native saw a four-fight UFC win streak snapped this past December when he was knocked out in the first round by Derrick Lewis and then was finished via strikes the following March by Curtis Blaydes.

Also added to the Oct. 1 card is a lightweight bout between Mike Davis and Uros Medic. Davis (9-2) has won two straight fights, most recently defeating Mason Jones via unanimous decision, while Medic (8-1) is coming off of a second-round TKO win over Omar Morales.

The Davis vs. Medic matchup was first reported by Fight Bananas.

Bantamweight veteran Raphael Assuncao looks to stop the longest losing streak of his career when he takes on the dangerous Victor Henry at UFC Vegas 62, which takes place Oct. 15 at UFC APEX in Las Vegas.

The bout was officially announced via social media.

Assuncao (27-9) has lost four straight fights, with back-to-back knockouts to Ricky Simon and Cody Garbrandt in his past two appearances. He has not scored a victory since a unanimous decision win over Rob Font in July 2018, a win that capped off an 11-1 run for the Brazilian veteran.

Henry, a former standout in Japan’s RIZIN, DEEP, and Pancrase promotions, made an impressive UFC debut this past January with a unanimous decision win over Raoni Barcelos at UFC 270. “La Mangosta” has won nine of his past 10 fights.

Also at UFC Vegas 62, Mike Jackson returns to fight Pete Rodriguez. Jackson (1-1) scored his first UFC win this past April via disqualification in a bizarre, foul-filled fight against Dean Barry, while Rodriguez (4-1) looks to bounce back from a first-round knockout loss to Jack Della Maddalena.

The Jackson vs. Rodriguez matchup was first reported by MMA Junkie.

As first reported by MMA Junkie, Means vs. Griffin takes place on Oct. 29 at a location still to be determined. This is the second appearance of 2022 for both fighters, who recently saw three-fight win streaks come to an end.

Means (32-13-1, 1 NC) was submitted in the second round by Kevin Holland this past June. Before that loss, he’d scored consecutive decision wins over Nicolas Dalby, Mike Perry, and Laureano Staropoli. “The Dirty Bird” is 14-10 (1 NC) in 25 octagon appearances.

Griffin (18-9) entered his most recent fight against Neil Magny on the strength of wins over Carlos Condit, Song Kenan, and Ramiz Brahimaj. After dropping a split call to Magny, Griffin’s UFC record fell to 6-7.

Karolina Kowalkiewicz seeks another win after scoring her first in over four years.

The one-time UFC title challenger fights Silvana Gomez Juarez (11-4) in a strawweight bout on Nov. 12 at UFC 281, which takes place at Madison Square Garden in New York. ESPN Deportes was first to report the matchup.

Kowalkiewicz (13-7) defeated Felice Herrig by second-round submission this past June to snap a five-fight losing streak, her first win since outpointing Herrig at UFC 223 in April 2018. She holds a notable win over two-time strawweight champion Rose Namajunas and competed for the UFC title against Joanna Jedrzejczyk at UFC 205.

After starting her UFC career 0-2, Juarez (11-4) picked up a first-round knockout victory over Liang Na at UFC 275 this past June.

A lightweight bout between Ottman Azaitar and Matt Frevola has also been added to UFC 281. The news was first announced via Azaitar’s social media.

Azaitar has yet to taste defeat in his career, going 13-0 as a pro and 2-0 in the UFC. His two UFC wins have both come by first-round knockout. This will be his first fight since September 2020.

Frevola (9-3-1) recently snapped a two-fight skid with a first-round knockout of the previously undefeated Genaro Valdez. The eight-year veteran holds a 3-3-1 record in the UFC.

Strawweights Vanessa Demopoulos and Maria Oliveira are booked for a November clash.

Demopoulos (8-4) and Oliveira (13-5) fight Nov. 19 at a location still to be determined. The matchup was first reported by MMA Junkie.

Both women are looking to advance in the increasingly competitive strawweight division, with Demopoulos coming off of back-to-back wins and Oliveira having scored her first UFC victory in her most recent outing.

Oliveira defeated Gloria de Paula by split decision this past June to improve to 1-1 in the UFC.

Miranda Maverick vs. Shanna Young has been rescheduled.

The flyweight contest is now set for a Nov. 5 UFC event, with a location still to be determined. The bout was originally to take place at UFC 278 this past weekend, but was postponed when Young was taken to the hospital due to an illness prior to Friday’s official weigh-ins.

A post shared by Miranda “Fear The” MAVERICK (@fearthemaverick)

In five UFC appearances, Maverick (10-4) has gone 3-2 with wins over Sabina Mazo, Gillian Robertson, and Liana Jojua. She recently snapped a two-fight losing streak with a second-round submission of Sabina Mazo this past March.

Charles Jourdain has himself a quick turnaround after a disappointing result.

Following a close majority decision loss to Shane Burgos at UFC Long Island this past July, Jourdain (13-5-1) now fights Nathaniel Wood (18-5) in a featherweight bout at UFC Paris on Sept. 3. The matchup was first reported by MMA reporter Al Zullino.

Jourdain has long been in the thick of the competitive 145-pound division, going 4-4-1 for the promotion with wins over Lando Vannata, Andre Ewell, and Doo Ho Choi. For Wood, this marks his second fight at featherweight after previously competing at bantamweight. He won his first fight in his new division this past July with a unanimous decision nod over Charles Rosa.

The new matchup was first reported by Eurosport.

Hamdy Abdelwahab has a stiff test for his second UFC fight.

A heavyweight bout between Abdelwahab (6-0) and Parker Porter (13-7) is targeted for UFC 280 on Oct. 22, which takes place in Abu Dhabi. MMA Junkie was first to report the matchup.

Porter is coming off of a first-round submission loss to Jailton Almeida this past May. Prior to that setback, Porter won three straights fights, winning decisions over Alan Baudot, Chase Sherman, and Josh Parisian.

Abdelwahab made a successful UFC debut at UFC 277, defeating Don’Tale Mayes via split decision. He had finished all five of his previous opponents.

A battle of lightweight veterans has been added to the first card of December.

Marc Diakiese (16-5) and Michael Johnson (20-18) fight on Dec. 3, with a location still to be determined. The matchup was first reported by MMA reporter Al Zullino.

Diakiese finds himself surging after a three-fight skid from 2017-2018. He is 4-2 in his past six fights and has won consecutive decisions over Damir Hadzovic and Viacheslav Borshchev. “Bonecrusher” is 7-5 since joining the UFC in 2016.

Johnson lost a thrilling split decision to Jamie Mullarkey in his most recent outing. This past May, Johnson scored his first win in almost four years when he knocked out Alan Patrick in the second round. His UFC record currently stands at 12-14.

Two middleweights on lengthy losing streaks are set to collide on Dec. 12.

Edmen Shahbazyan (11-3) fights Dalcha Lungiambula (11-5) at UFC 282, which is expected to take place at T-Mobile Arena in Las Vegas. Eurosport was first to report the matchup.

A top prospect who won his first four UFC contests, Shahbazyan is currently on a three-fight skid. Most recently, he lost by second-round TKO to Nassourdine Imavov at UFC 268. “The Golden Boy” seeks his first victory since scoring a head kick knockout inside of a round against Brad Tavares in November 2019.

Lungiambula is also winless in his past three contests, suffering losses to Punahele Soriano, Cody Brundage, and Marc-Andre Barriault. In his most recent outing, Lungiambula was knocked out in the second round by Soriano, a result that dropped his UFC record to 2-4.