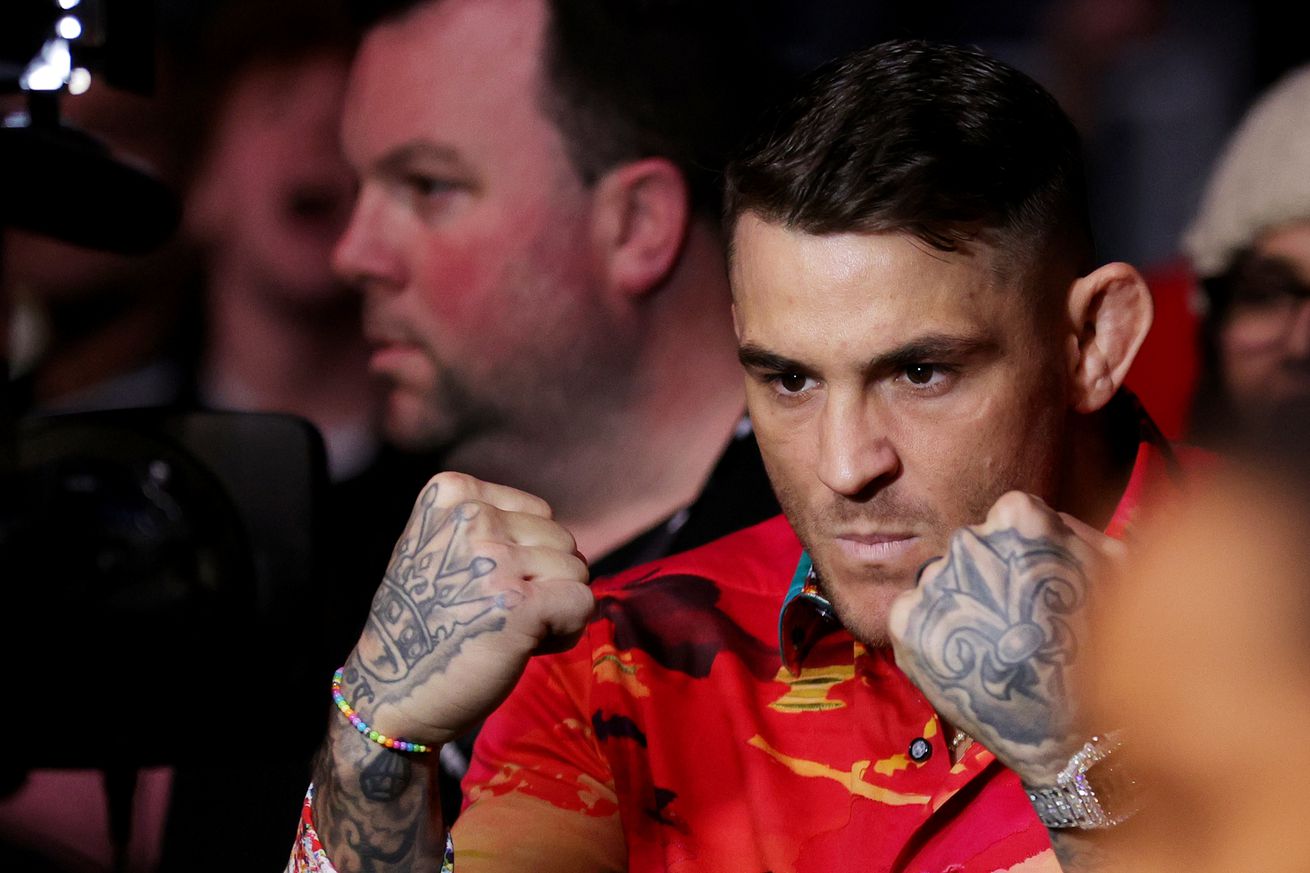 It’s been a big week. UFC 277 happened, with several very important outcomes taking place, and then the UFC announces Dustin Poirier vs. Michael Chandler. So let’s talk about all that, plus a brief mention of UFC Vegas 59 tonight.

After his recent loss, what do you do with Kai Kara-France?

At UFC 277, Kara-France lost to Brandon Moreno for a second time, getting stopped in the third round by a brutal body kick. To make matters worse, KKF had been winning the round up to that point and looked to be in good position to avenge his 2019 loss to Moreno, until instead he was curled up in a ball on the ground. Such is the way of MMA, and it’s left KKF in a difficult position.

On the one hand, Kara-France is still relatively young, he seems to have found his peak form, and a loss to the now-interim champion doesn’t set him too far back on his title aspirations. On the other hand, if Moreno goes on to reclaim the undisputed title, he has two wins over KKF, thus the New Zealander would need a pretty impressive string of wins to merit a third crack at him. Ultimately, that means there are two very clear next steps for Kara-France: 1) Pray like hell that Deiveson Figueiredo stays flyweight champion, and go fight Alexandre Pantoja.

Pantoja also fought at UFC 277 and had the best performance of the weekend, blowing the doors off poor Alex Perez. Pantoja now has three wins in a row, all over ranked opposition, and in truth, “Xander Pants” deserves a title fight. He won’t get one because of the title situation though, so KKF should do his best to make that fight happen, because if a few things break his way, he can be back in the title picture sooner than many would have imagined.

How more fights does Magomed have to win to get that title shot?

Should he wait for the Jiri/Glover/Jan thing is over or should he fight the winner of Hill/Santos (who he’s beat already)?

While Pantoja is getting a raw deal in the title shot conversation, no one is getting it worse than Ankalaev. Ankalaev’s won nine fights in a row, the most of any light heavyweight in UFC history not named Jon Jones. Think about that for a second. In a marquee division like 205 pounds, Ankalaev has done something only Jon Jones has done before. He also has done something Jon Jones didn’t do by stopping Anthony Smith in the second round (albeit with an injury assist). By most reasonable measures, Ankalaev deserves the next light heavyweight title, but he’s most likely third in line behind Glover Teixeira and Jan Blachowicz simply due to the fact that they were previously champions.

Given just how exciting Jiri Prochazka vs. Glover was — it’s a lock for Fight of the Year, and legitimately in the conversation for greatest fight of all-time — I’m willing to accept the UFC running that one back. So that really leaves only one option: Ankalaev fights Blachowicz in a title eliminator bout. It sucks for Ankalaev, but that’s just how it goes.

What’s your take on the women’s featherweight division? Can Amanda still claim the belt for a division that has no contender and no rankings? Are they just holding out for Kayla?

Amanda Nunes reclaimed her bantamweight title at UFC 277, also reclaiming double-champ status in the process, since she remains the queen of a division that doesn’t exist, at least not in the UFC. It’s exceedingly dumb that the UFC is continuing this charade, but it’s not hurting anyone so I suppose it’s fine at the end of the day.

Here’s the truth: The UFC isn’t in the Kayla Harrison business. To paraphrase Jesse Eisenberg as Mark Zuckerberg: “If they were in the Harrison business, they’d be in the Harrison business.” The UFC had the chance to sign Kayla Harrison in free agency, and they passed, presumably because they did not want to offer more than their competitors. That inclination isn’t going to change for them. They’re going to offer what they believe suits their bottom line — and Harrison simply doesn’t. She’s a draw, but not a monster draw, and there is exactly one fight that the UFC cares about making. By the time Harrison becomes a free agent again, Nunes might not even still be here.

The UFC keeping a featherweight division truly does seem to be a case of it costing them nothing to do so, it giving them another belt to put on posters and promote, and it keeping one of their most accomplished fighters — one who has been a company woman her entire career — happy. And that’s a shame, because women’s 145 is certainly not a deep division, but there are enough bodies to make a legitimate one if the UFC wanted to spend the resources, and if they invested in it, it would grow over time. But that’s not who the UFC is. They don’t build good things, they buy things when they get good. It’s a successful business model and one they won’t abandon anytime soon.

Considering that Poirier/Chandler is near finalized, does the winner of that fight earn a titleshot? Does Volk have priority? And how would your opinion change depending on the result of Oliveira/Islam. And what to do with the winners of Dariush/Gamrot and Gaethje/Fiziev?

With chandler 2-2 and Dustin losing his last fight what’s at stake for the winner? Can’t just give either guy a title shot off a win can you?

In case you missed it, a lightweight banger between Poirier and Chandler is all but confirmed for a PPV event at the end of the year. It’s a fight that is going to grab all the headlines (as it should) and be massively important for the 155-pound division, and yes, sadly, it may well be a title eliminator.

I’ve been on my soap box for awhile about this, but I hate what is happening at lightweight right now (or, more appropriately, over the past year and a half). The biggest names of the UFC’s rankings have all had their shots at a title, failed, and are now just fighting each other. The fights are great, so we’re OK with it, but the end result is that the best, deepest division in the sport is being stagnated by a few guys squatting on their rankings. For the love of God, Conor McGregor is still ranked! He hasn’t won at lightweight since 2016!!!!! There are a number of insanely talented lightweights, putting on great performances and slowly climbing the ranks, but who are still years away from a title shot because Poirier and Chandler are going take them on the back of Poirier beating Conor McGregor and Chandler beating Tony Ferguson! I genuinely cannot imagine how guys like Mateusz Gamrot and Rafael Fiziev feel, knowing they would likely trounce Poirier at this point in time, but that they won’t get a shot unless they string together 12 wins.

Now to bring in Volkanovski. This, more than any other reason, is why I am so adamantly against Volkanovski getting a lightweight title shot, because the division needs to sort itself out fight. Volkanovski has his own division that he lords over, and for as great as he’s been, the truth is he has in no way cleaned out featherweight. He’s beaten Max Holloway three times and then Brian Ortega. That’s two guys in the Top-5. Volkanovski should spend the next year cleaning out his weight class, letting lightweight get some semblance of structure to it, and then he can get his shot at champ-champ status.

Can Makhachev neutralize Charles on the ground

Charles Oliveira is a great fighter and a dangerous grappler, but sometimes I think MMA fans have collectively lost their minds about the danger he presents on the ground. Plenty of fighters have gone down to the ground with Chucky Olives and lived to tell the tale. And those fighters are not as good as Islam Makhachev.

I feel about this fight the same way I always felt about Khabib Nurmagomedov vs. Tony Ferguson: It’s one-way traffic. Oliveira is the more dangerous striker, but A LOT of his efficacy on the feet comes from simply being willing to fall to his back. When Gaethje or Poirier hurt him, Oliveira fell over and got time to recover because they were afraid to play in his guard. Makhachev is either going to punch him directly in the head super hard and then follow up with ground-and-pound, or he’s going to just tackle him and go to work. If Paul Felder can sit in the guard and elbow Oliveira’s face into hamburger, I think Makhachev can do the same.

Is Bo Nickal gonna be the next big thing in MMA

It’s way too early to tell, but there’s a good chance he will be. Nickal was an elite collegiate wrestler, and the only reason he didn’t have an Olympic run in him is because he wrestles at the same weight as David Taylor, the guy who won the 2020 gold medal. If Nickal wanted to devote the next 10 years to wrestling, he would make at least one U.S. National Team, and likely medal somewhere. But instead he wants to fight, and we are going to be much better for it.

What’s the best way to change the judging?

Add accountability. Gross incompetence doesn’t register, and until it does, judging will never get better. That’s the bottom line. I’d love to see an overhaul of the scoring system because I think it doesn’t do what we want, but 99 times out of 100, people’s issues with judging aren’t because of open scoring or the scoring criteria or whatever. It’s just judges not doing well and nothing happening as a result of it.

Why does the UFC continue to main event fighters like Santos and Holm where they know the fight is likely going to be absolutely terrible when the co-mains are likely always the better fights. Perceived popularity (which I assume is the answer)? Contractual obligations? I’m lost.

Because fights being fun has absolutely no bearing on ratings. You and I are going to watch regardless. Ratings are drawn by the casual fans, and casual fans don’t research Fight Night cards before tuning in to make sure it’s something they care about. They just change the channels, see Thiago Santos is fighting, and then remember the time he detonated Jimi Manuwa or whatever, and say, ‘Sure, that could be fun.’ If the UFC was better at promoting, then they could sell people on some of their incredible fights as main events, but that’s not what they do anymore. They’re just throwing out content and letting the brand do the rest. Which is why Thiago Santos, who has not been fun in three years, is getting another 25 minutes of non-action tonight. Let’s all pray that Jamahal Hill can somehow bring the fun “Marreta” back.

Thanks for reading and thank you for everyone who sent in Tweets! Do you have any burning questions about things at least somewhat related to combat sports? Then you’re in luck, because you can send your Hot Tweets to me, @JedKMeshew, and I will answer them! Doesn’t matter if they’re topical or insane. Send them to me and I’ll answer the ones I like the most. Let’s have fun.