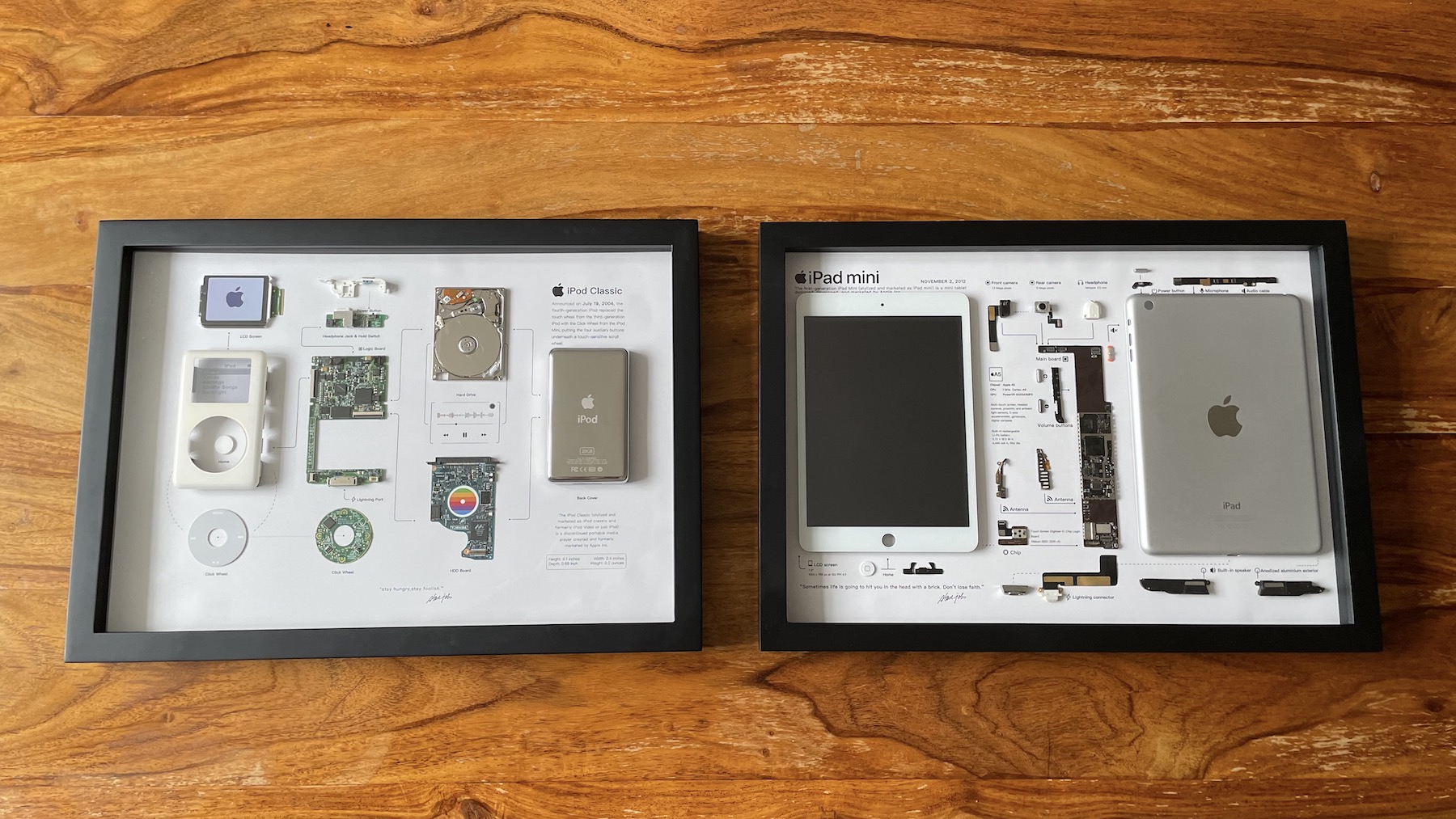 GRID Studio is known for offering wall art showcasing vintage devices that are an important part of Apple’s history. Each device is disassembled and the components are artistically displayed in a frame that can be hung on the wall of any Apple fan.

The fourth-generation iPod Classic and first-generation iPad mini are among the newest additions to GRID’s lineup of devices, selling for $499 and $249, respectively. Prices for GRID’s pieces start at $40 for an A-series chip and go up to $400 for the original iPhone, but there are all kinds of options priced at around the $200 mark.

GRID’s frames come well-packaged to protect them in transit and are enclosed in thick black paper, finished with a ribbon and a wax seal to make the device within feel truly special. While GRID’s products come impressively packaged, I’d warn customers about getting paper cuts from the packaging – something that has happened to me repeatedly when opening multiple GRID frames.

The black wooden frames GRID uses contrast well with the white card upon which the device components are glued and go relatively easily with most interior designs. Unfortunately, the black frames seem to immediately attract quite a lot of fingerprints and dust, but they are mostly easy enough to remove with a damp cloth.

The frame contains a pane of transparent plastic rather than glass. I would have preferred glass, but it doesn’t negatively affect displaying the device at all. To remove the film protecting the clear plastic, you need to open the frame from behind. This also enables you to wipe away any excess fingerprints or dust from inside the frame or the components.

Like GRID’s other displays, the disassembled iPod’s components are methodically laid out inside the frame, with printed details to highlight different aspects, such as a printed image below the iPod’s display to give a 3D effect and show what it would have looked like in use. Annotations explain what each of the components are, a bit of the device’s history, and provide a quote from Steve Jobs.

The first-generation ‌iPad mini‌ is GRID’s first iPad display. The first ‌iPad mini‌ was introduced in 2012, featuring similar specifications to the ‌iPad‌ 2, including its display resolution, for a starting price of $329. The ‌iPad mini‌ takes up a lot of space inside the frame, but I’m pleased that all of GRID’s frames are the same size for consistency.

The devices do have some wear and tear in places due to their age and because they are used. Nevertheless, they are more than adequate for display and it is clear that GRID has selected devices with only minimal wear. For my frames, the polished, mirror finish of the iPod, its internal hard drive, and the immaculate display of the ‌iPad mini‌ look particularly good and emphasize the devices at their best.

All in all, the fourth-generation iPod and first-generation ‌iPad mini‌ are great additions to GRID’s product lineup. With attention to detail and plenty of nice touches to make the device feel special, GRID’s frames are the perfect items for any Apple fan looking to bring some of the company’s iconic designs into their home in a thoughtful way.

GRID Studio’s products are available from its website, gridstudio.cc. The GRID Studio iPod Classic and ‌iPad mini‌ are currently $100 off.

Note: GRID Studio provided MacRumors with a framed iPod Classic (fourth-generation) and ‌iPad mini‌ (first-generation) for the purpose of this review. No other compensation was received.