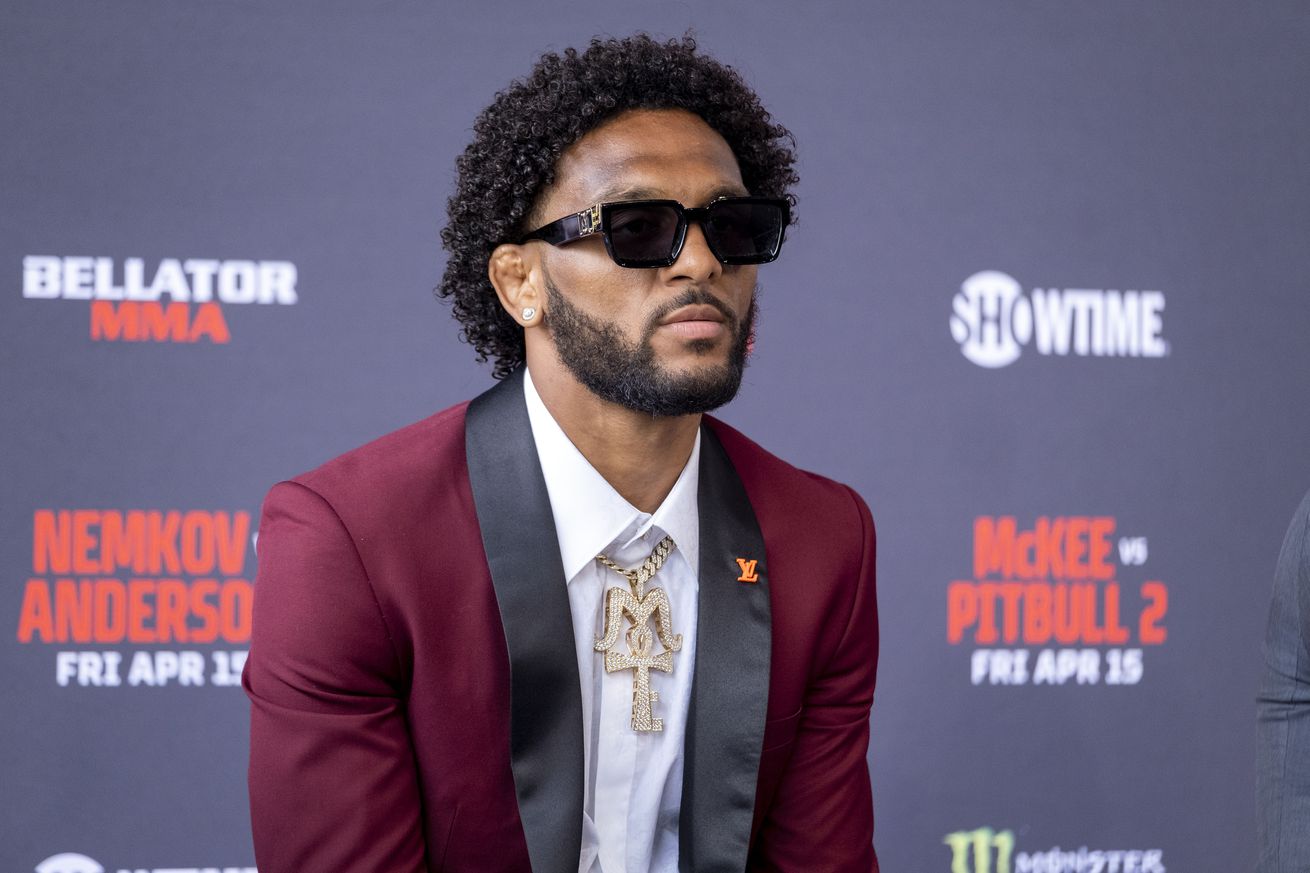 A.J. McKee is making the move to 155 pounds, but he admits it wasn’t his first choice.

On Wednesday, Bellator announced that McKee will not face Patricio Pitbull in a trilogy bout for the featherweight title at Bellator 286, but instead the ex-champ and grand prix winner will face UFC vet Spike Carlyle in his lightweight debut, which takes place Oct. 1 in McKee’s hometown of Long Beach, Calif. Coincidentally, Pitbull will defend his title on the same card in the main event against Adam Borics.

While McKee has talked about moving up in weight class in the past, he explains why it’s happening now.

“No rematch,” McKee told MMA Fighting. “I wasn’t offered a rematch, so to put my body through, put my family through everything to get to 145 pounds when I’ve literally walked through the entire division — I was looking at my belt the other day and I was like, ‘I’ve got five names on this belt that I’ve scratched out that I’ve personally taken out.’

“But to me, I honestly wasn’t too intrigued with the rematch in the first place, but obviously I don’t turn down fights. Bring me a fight and I’ll take the fight. Getting the second fight with Pitbull, I didn’t have too much motivation, and the decision, it was a little unsettling — for not just myself, my teammates, but I think the rest of the world that knows about mixed martial arts. He didn’t beat me the first time, and it’s weird because he talks about ‘kick for kick.’ If you look at the kick for kick he’s talking about, I blocked his kick with my forearm and he tasted my shin with his mouth. I don’t know, it’s real weird.

“He says wants the fight, but the fight was never offered, and now he’s fighting Borics. Hats off to Borics, but if he says he wants to fight, bro, let’s fight. Win or lose, I’ll come back down to 145 pounds one last time to whoop his ass because it’s an unsettling loss. My first loss, but it was the fire I needed under my butt.”

McKee stopped Pitbull in less than two minutes to win the title at Bellator 263 in July 2021. They met again in April at Bellator 277, where Pitbull reclaimed the belt with a unanimous decision win — one McKee feels he should’ve gotten.

The move to lightweight is exciting, but still met with some mixed emotions, especially with how the second fight with Pitbull ultimately played out.

“I get bored, bro. I starched you in less than two minutes,” McKee said. “So I’m supposed to be excited to go fight you again? Nah, bro. In my defense, even on my worst day he couldn’t beat me, and that was literally my worst day. That was a fight where I was in there and I didn’t want to be in there — just keep him away, stay long, and pick him apart. There was no need to try and finish him. Now being the champ, I say, ‘Hey, let’s see what you have to bring to the table. I want to see you bring the fight to me.’

“The fact that he’s coming to my city and fighting on the card against Borics to defend the title that he knows he didn’t really win — I mean, he ‘won,’ but whatever — but at the end of the day, I just want to fight. I get tired of sitting around, and every time we fight, he damn near takes a year break. With me, I want to get in there two months, three months later. My body gets acclimated sitting at 170, 180 pounds, and then eight months go by and it’s like, ‘Hey, want to fight?’ Not really, I’m enjoying snowboarding season, trying to enjoy my life. I’ve been in this fight game a long time.

“But the Pitbulls, they’ve pulled out of many fights, I don’t pull out of fights. They talk about fear — I fear no man, and that’s factual. If you want to test it, come test it. But he’s tested it, and I don’t think he wants to test it again.”

Had Bellator presented McKee with the option to stay at 145 to face Pitbull a third time, or turn the page to a more healthy weight cut, the 27-year-old still would’ve chosen the former — especially now knowing where the event will take place.

“But I was offered a fight, I asked if it was the rematch, they said no, and I said I was moving up to 155. Then they announced Pitbull vs. Borics and I was like, ‘Oh, hell no. The audacity. You’re coming to my city to fight [Borics]? Hell no.’ I was a little upset, but I’m not tripping, dude. I’m moving on to bigger and better things.”

After parting ways with the UFC following back-to-back losses, Carlyle enters his second Bellator appearance with five straight wins, which includes finishes in LFA, Cage Warriors, and RIZIN. In his first promotional bout, “The Alpha Ginger” had an incredible comeback to stop Dan Moret via third-round submission at Bellator 272 in December.

McKee is aware of how tough and game his next opponent is, even though it appears there are Bellator fans who aren’t.

“Everyone’s saying, ‘You’re not fighting a ranked opponent.’ What does that matter? Usman [Nurmagomedov] just fought someone that wasn’t ranked and he [was] No. 3 on the rankings,” McKee continued. “If it was up to me, I’d be whooping [Patricky’s] ass, but clearly he doesn’t want to fight. That’s why he pulled out of the fight against [Sidney Outlaw], who just got knocked out by the dude that whooped [Patricky’s] ass in Japan. I wouldn’t want to fight either.

“I’m excited to get back in that cage. New goals, new tasks, man. I’m eager to see what this new chapter is going to look like. [I’m going to be] faster, stronger, bigger, walking around at 175 consistent right now, so I’m loving it.”