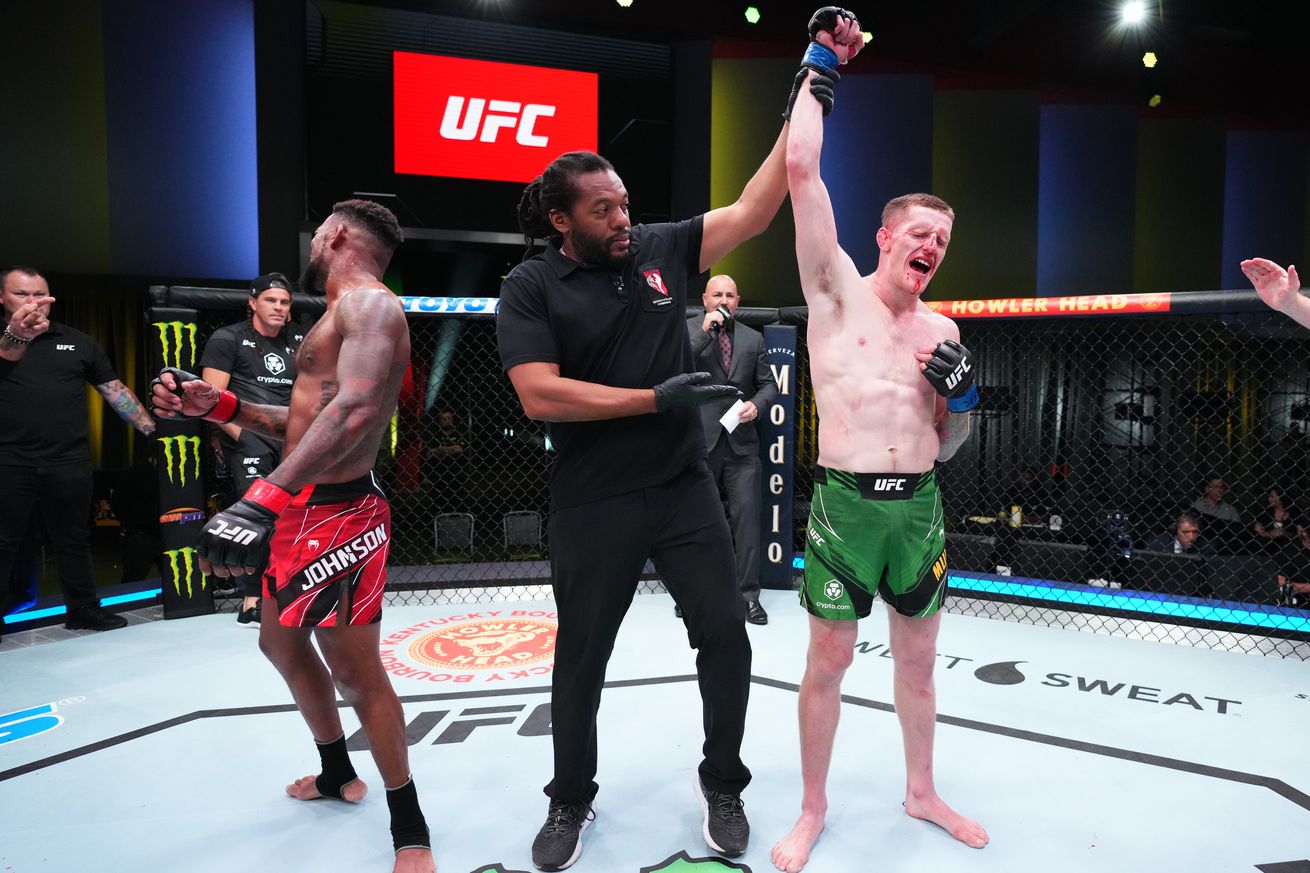 Few things infuriate MMA fans more than a fight being scored incorrectly, though the term “robbery” tends to be thrown around carelessly and is often steeped in bias. With Robbery Review, we’ll take a look back at controversial fights and determine whether the judges were rightly criticized for their decision or if pundits need to examine their own knee-jerk reactions

Long one of the lightweight division’s most talented, skilled, and unpredictable fighters, it looked like Johnson might finally be turning the corner after he scored a sensational knockout of Alan Patrick this past May. Booked in a favorable matchup with Jamie Mullarkey for UFC Vegas 58, it was distinctly possible that Johnson could find himself celebrating back-to-back wins for the first time since 2018.

It was not to be.

Johnson and Mullarkey had themselves a corker of a scrap, one that earned them both an extra 50 Gs for the Fight of the Night, but only Mullarkey would walk out with his win bonus as he had his hand raised via split decision. Unsurprisingly, given how competitive the fight was and that Johnson scored the lone knockdown of the bout in Round 1, there was disappointment for Johnson and controversy on social media.

Cortney Casey, who suffered her own tough loss on the cards to Antonina Shevchenko earlier in the evening, was particularly sympathetic and Johnson was glad to have her support.

Yes I am! Keep you’re head up also. I’m convinced they don’t even watch the fights! Would love to see pics of them not paying attention. https://t.co/Iq2ILcBHhP

Fans definitely got their money’s worth with UFC Vegas 58’s thrilling opener, but do the judges owe Johnson money after that decision? Let’s take this one to the Robbery Review lab.

What was the official result?

How did the fight go?

Johnson’s hands looked great from the start. He was quick to figure out the timing of Mullarkey’s leg kicks and he tagged Mullarkey several times when Mullarkey tried to score low. It’s worth pointing out that Johnson wasn’t necessarily evading those attacks, but he was making Mullarkey pay for them.

With just under two minutes remaining in Round 1, Johnson landed a perfectly timed left hook that rocked Mullarkey and put him on his backside. Johnson hit some good ground-and-pound, then focused on wrestling Mullarkey down, but Mullarkey recovered well and was able to get to a neutral position. This was a testament to Mullarkey’s chin, but also a missed opportunity for Johnson.

It looked like it was going to be a clear Round 1 to Johnson and then disaster struck the lightweight veteran as he ate a combination that wobbled him and prompted a reactive single leg. Mullarkey sprawled and hit some elbows to the side of Johnson’s head, then they ended the round back on the feet and swinging.

Mullarkey, in classic wounded animal fashion, came out in Round 2 lobbing out his heavy right hand. He also had his jab going and, like Johnson in Round 1, seemed to have a solid grasp of his opponent’s timing. Johnson stuck with his boxing, but Mullarkey racked up the points with a wide variety of techniques. A clinch knee had Johnson retreating and Mullarkey advanced with another high knee right on target. Johnson didn’t shy away from the scrap, but Mullarkey hit a high kick, another combination, and another big clinch knee that sealed the round for him.

Johnson backed Mullarkey up with a straight left to start the third. The first two minutes of the final round were close as both fighters stood right in the middle of the octagon, sized each other up, and exchanged. Johnson’s hands were as sharp as they were in Round 1, while Mullarkey continued to throw power punches and kicks to the leg and body. That left hand of Johnson absolutely cracked Mullarkey on a couple of occasions. He hit Mullarkey with a hard one on the chin at the end of the round, and Mullarkey just walked right through it. Geez. Super fun and entertaining fight from beginning to end.

What did the judges say?

What did the numbers say?

However, Johnson scored the only knockdown of the fight in Round 1 and was much closer to Mullarkey when counting total head strikes (Mullarkey 54, Johnson 42), which are typically a strong indicator of who is landing the more damaging attacks.

Johnson also did well in the body strike category, holding a slight 22-21 edge, while the time Mullarkey put into leg kicks was evident in his 21-2 edge there.

What did the media say?

The media backs up “The Menace.”

Sixteen of the media scores on MMA Decisions are in Johnson’s favor, while four scored it for Mullarkey. All the scores were 29-28s, except for Seán Sheehan of SevereMMA.com, who scored it 29-27 Mullarkey.

What did the people say?

Fans on MMA Decisions overwhelmingly scored the fight 29-28 in Johnson’s favor, with that option receiving 75.3 percent of the vote. A 29-28 win for Mullarkey comes in at 14 percent, while 6.5 percent saw the fight as a draw.

Voters on the Verdict MMA app narrowly scored the bout for Johnson.

It was close, but the Verdict Scorecard had Michael Johnson defeating Jamie Mullarkey.

The 1st round was the closest round of the fight as it had a knockdown from each fighter.#UFCVegas58 pic.twitter.com/PDb61B9Y1G

That scoring system takes the cumulative total of every submitted fan score (filtering out aberrant scores like random 10-7s if they comprise less than one percent of the total) in every round and divides by the amount of submitted scores to determine the winner of each round and also in totality.

Round 1 went to Johnson by just 30 points, while Mullarkey ran away with Round 2 at plus-87. Johnson then won Round 3 by a similarly large margin of 77 points. That adds up to a 20-point win for Johnson, which is anything but definitive (the closer you are to a 100-point win under Verdict MMA scoring, the more convincing a case you have for a victory).

How did I score it?

This was such a fun fight, I almost hate having to do this Robbery Review, but I received several messages requesting that I take a closer look and there was no ignoring the scoring skepticism from fans and media afterwards.

After a critical viewing (with liberal use of the rewind function to examine pivotal exchanges), I scored it for Johnson 29-28, giving him rounds 1 and 3. The knockdown in Round 1 was enough for me to lean towards Johnson, plus he was effectively counter-striking early on. The late flurry by Mullarkey was arguably enough to match Johnson’s knockdown, but I felt that Johnson was closer to finishing, so that’s where he gets the nod for me.

Round 2 was the biggest round of the fight and Mullarkey definitely put it on Johnson for the majority of the period. However, I didn’t see enough for a 10-8 because I never felt that Johnson was being completely dominated (he responded with solid punches here and there) nor was the fight in danger of being waved off.

Was it a robbery?

In a close fight that featured several swings of momentum, I’m struggling to justify a robbery call here. Johnson was understandably disappointed following the judges’ verdict, but he got hit with a ton of clean shots in this fight and looked hurt and off-balanced on multiple occasions (he might have been perfectly fine, but the judges can only judge what they can see).

As I mentioned before, though I don’t think Mullarkey was closer to finishing the fight than Johnson, you can make an argument for it. This is not boxing where a knockdown automatically gets you a 10-9. Round 1 was certainly trending in that direction for Johnson until he was hurt by Mullarkey’s late charge. Knockdown or not, I can see how two judges gave that close call more weight.

This fight is a perfect example of how impact and damage are key parts of the criteria, but also highly subjective as there is literally no way for the judges to know just how forceful a strike actually was (hence why there’s often a heavy emphasis on knockdowns because otherwise, what concrete visual evidence is there to go by?). Unless we want to hand over the judging reins to the infallible PFL SmartCage, this is an element we have to accept. 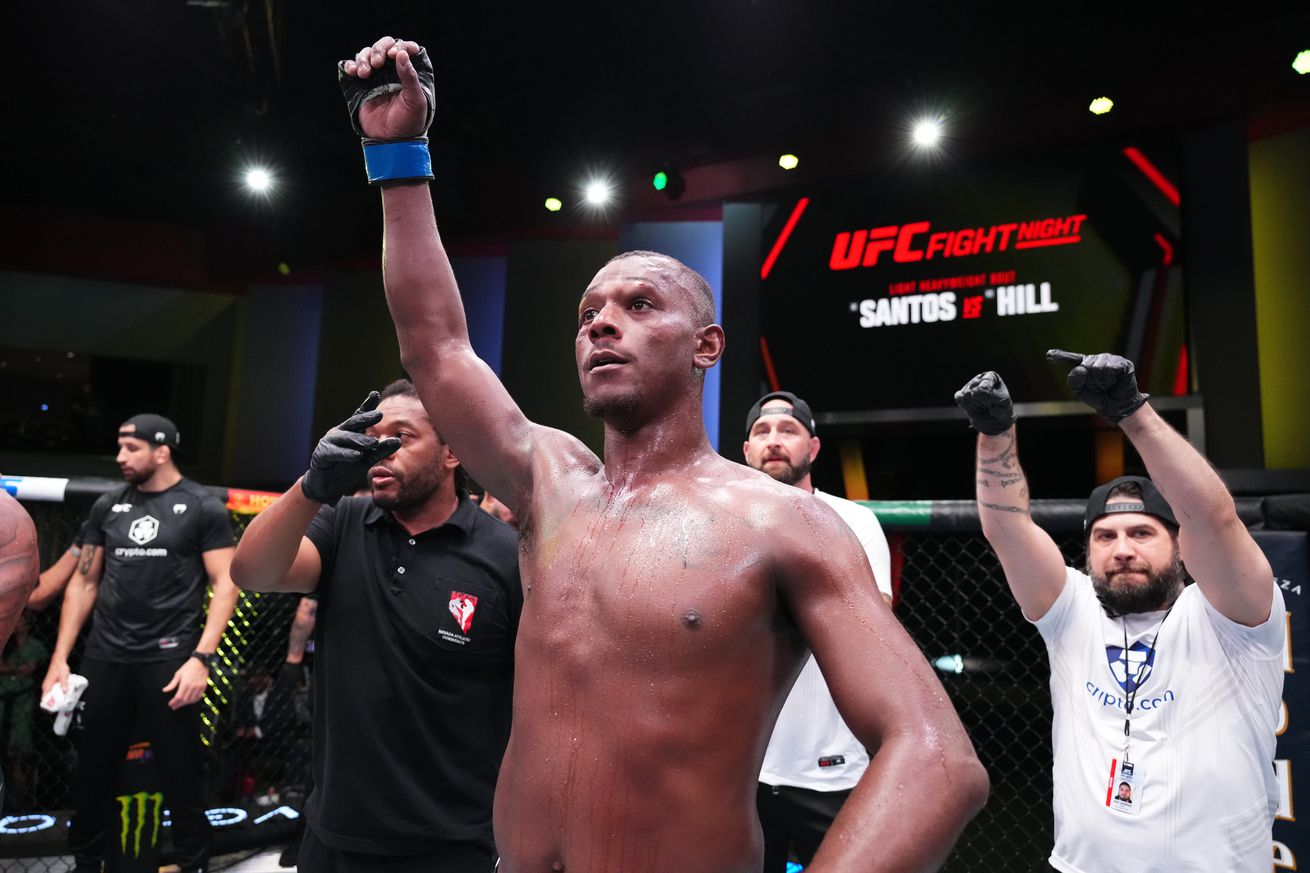 Jamahal Hill explains why he wasn’t happy with his win at UFC Vegas 59, calls for Jiri Prochazka fight