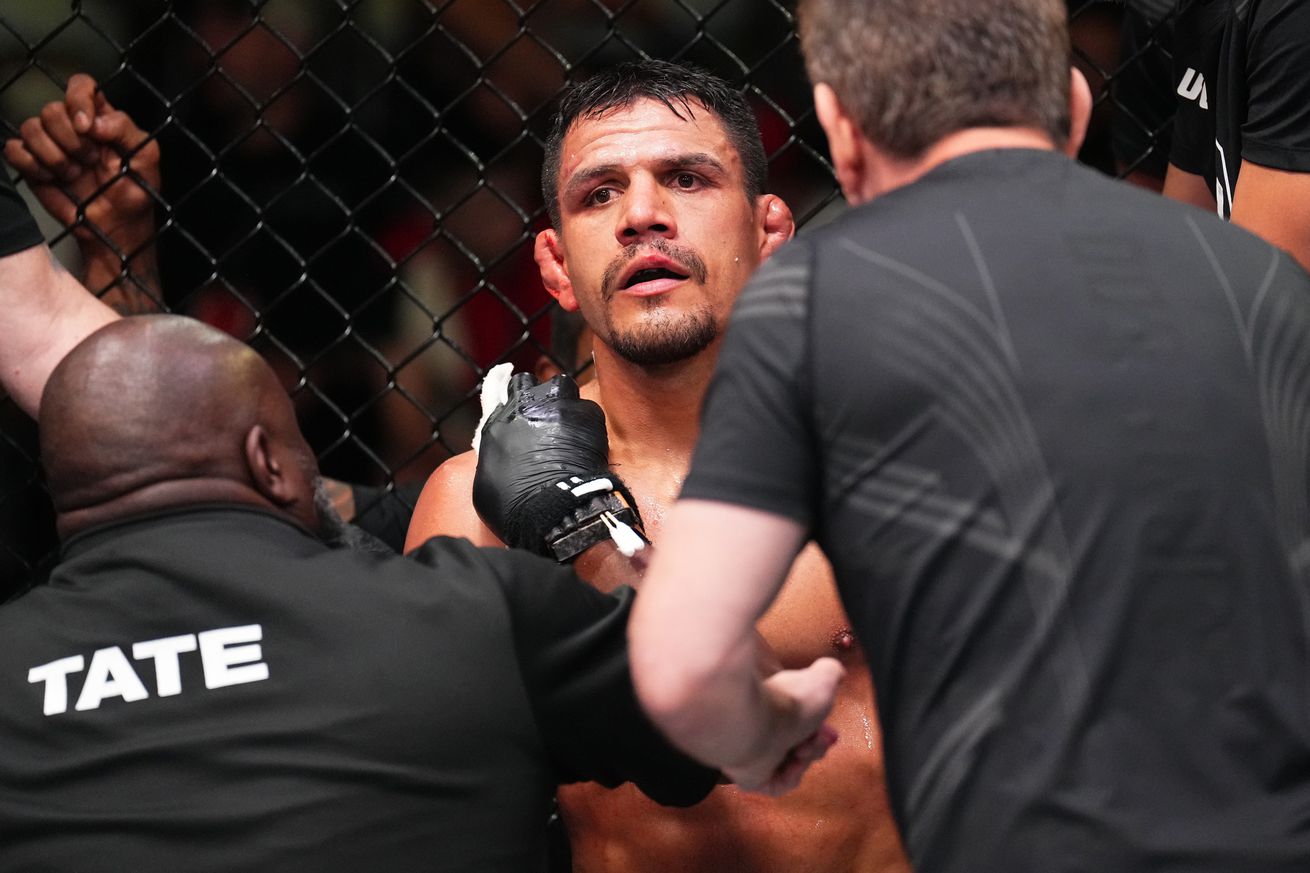 Just when Rafael dos Anjos felt like he was surging to victory, he got caught by a vicious left hook from Rafael Fiziev that ended his night at UFC Vegas 58.

The stunning conclusion came just 18 seconds into the fifth and final round after Fiziev blasted the former lightweight champion with the punch that put dos Anjos down to the canvas. One more shot followed as referee Mark Smith rushed in to stop the contest before dos Anjos could absorb any more damage.

Immediately afterward, it appeared dos Anjos was protesting the stoppage. But in hindsight, the 37-year-old Brazilian had no complaints about the way it ended.

“I don’t think so,” dos Anjos answered when asked if he thought he was the victim of an early stoppage on the UFC Vegas 58 post-fight show. “I’ve got to rewatch the tape, but I don’t think so. He won fair and square.

“I’ve got to rewatch it, and I was kind of still dizzy, but yeah it was a tough fight. Rafael was a tough opponent. I trained very hard for that fight ,and I was really feeling I had my momentum, but that’s the game.”

After arguably his best round in the fourth, dos Anjos was looking to secure his win in the fifth. But a mental error at the start of the round ultimately cost him.

“I think I was going to the fifth, I was like, ‘I have to put the pressure,’ like my style,” dos Anjos explained. “I thought he was tired, but he’s dangerous. He’s got heavy hands, and I should have more careful at the beginning of the round.”

The loss snapped dos Anjos’ two-fight winning streak since he returned to the lightweight division in a bid for another run at the title he held in 2015.

While it certainly wasn’t the result he wanted, dos Anjos had to pay credit to Fiziev for a job well done as he seized on the moment to earn the knockout in the fifth and final round.

“He’s a tough dude,” dos Anjos said. “I didn’t expect any less from him. I knew guys from east Europe, they’re always tough and I knew it would be a hard fight. Actually his takedown defense impressed me a little bit but I got him down in the fourth [round], hit him with the flying knee, too.

“The fight was pretty close leading up to the fifth. I think I was probably a little bit ahead of him but that’s the game. I got caught unfortunately.”

Following back-to-back training camps, dos Anjos isn’t quite ready to contemplate what exactly will come next for him, especially after a disappointing outcome on Saturday.

Falling to Fiziev probably won’t send him too far down the rankings, but dos Anjos also understands there’s far less road ahead than what’s already left behind.

“I fought four months ago, I fought [Renato] Moicano, now I fought Fiziev tonight and I’ve got to go back home and enjoy my family a little bit,” dos Anjos said when addressing his future. “I was away for 16 months and a long layoff with two knee injuries and a hernia, too.

“Now, it’s time to go back home and enjoy my family a little bit and see what the future holds.”