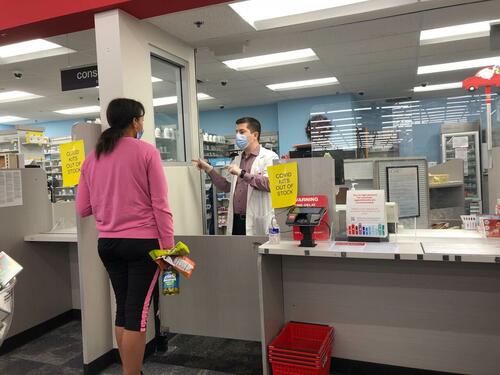 Tackling Middlemen Should Be A Priority To Lower Prescription Prices

Authored by Tom Price via RealClear Policy (emphasis ours),

The U.S. Federal Trade Commission (FTC) recently voted unanimously to turn up the heat on the middlemen of the drug supply chain. The agency is opening up an investigation into Pharmacy Benefits Managers (PBMs) for their role in “raising the price that consumers pay for medicine,” among other questionable behaviors.

For years, PBMs have used their position as gatekeepers to the consumer market to enrich themselves and insurance companies — conduct that has attracted the attention of regulators, policymakers, and the public as consumer drug costs balloon. Since the year 2000, spending in the U.S. on pharmaceuticals has nearly tripled.

How is the extra cost making its way to consumers? You see, drug makers typically provide discounts in the form of rebates alongside their products, which in a perfect world would translate to more affordable medicine. But under the current middlemen scheme, those savings never make it to the patient at the pharmacy counter. The money is instead sucked-up by PBMs.

A snapshot of the past four years provides a good illustration of what’s happening. Since 2018, the net price of brand name drugs (meaning the sticker price with the discounts applied) has actually declined every year. But the average consumer wouldn’t know that. The price they pay — after the medicine passes through PBMs — has actually gone up. In other words, the drug makers aren’t driving consumer price increases — middlemen are.

That’s why a Democratic proposal to apply government price controls on prescription drugs without a strategy to rein in PBMs is full of hot air. Government price setting might temporarily treat the symptoms but not the root cause of why medicine costs are rising. And in the long run, the approach will suppress the innovation required to develop new lifesaving treatments, therapies, and vaccines.

Democrats have a pattern of advocating for healthcare reform that is long on style, but short on effectiveness. Obamacare is a good example.

During debate over the 2010 healthcare overhaul, the White House continually pushed the idea that the reform would save the average family $2,500 annually. But the “cost saving” elements of Obamacare are sleight of hand. Healthcare costs are still going up, but those increases are hidden by government subsidies. If the government handout were to disappear, monthly premiums would jump dramatically.

It’s far from a hypothetical scenario. Enhanced Obamacare subsidies that were included in the Biden administration’s $2 trillion pandemic-era spending bill are set to expire come 2023. When that happens, average monthly health insurance bills will more than double for the roughly 13 million Americans who receive subsidies on Obamacare exchanges. The only way to stop it is for Congress to squeeze taxpayers even tighter to cover the difference.

Rather than attempting to manipulate prices via the heavy hand of government, lawmakers should look to the free market for help. Injecting price transparency, providing patients with more healthcare choices, and cutting bureaucracy from the patient-doctor relationship will lower prices while also improving the quality of care.

When it comes to healthcare reform, policies that come out of Congress are often shortsighted and ineffective at addressing the root problem. Pushing a plan to address rising medicine prices without a component to tackle PBM middlemen is the latest example. Hopefully, the FTC investigation helps some policymakers see the light.

Tom Price, a former secretary of Health and Human Services and a former member of Congress, is a senior healthcare policy fellow at the Job Creators Network.