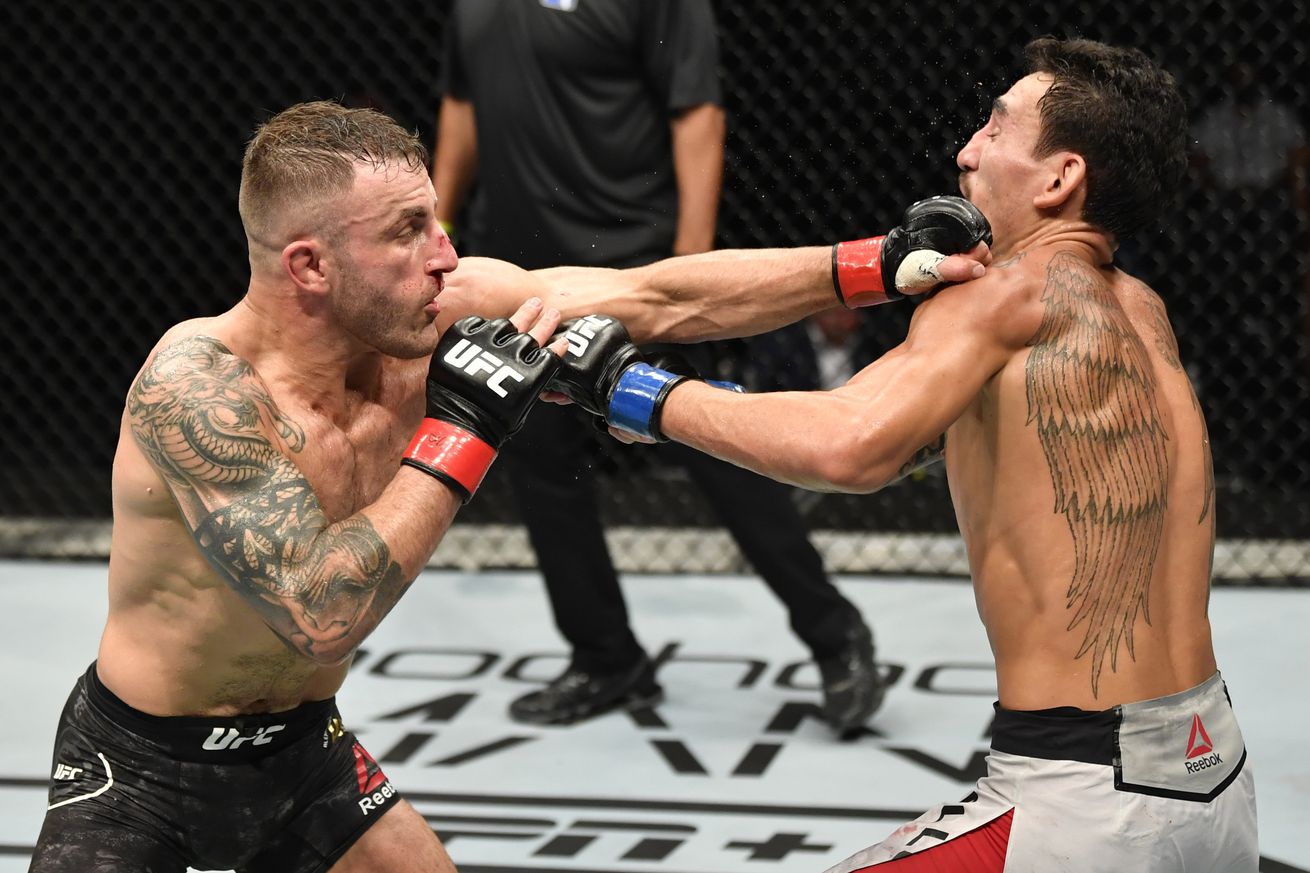 UFC 276 might be the most pay-worthy pay-per-view event of the year.

That’s not to take away from some of the excellent headliners and championship bouts that we’ve seen in the past six months, but on paper it’s hard to beat a card featuring three of the six best pound-for-pound best fighters in the world. Those three being Israel Adesanya (No. 2), who goes for the fifth defense of his middleweight title in the main event, and Alexander Volkanovski (No. 3) and Max Holloway (No. 6), who clash for a third time for the featherweight title in the co-main event.

Adesanya has promised to make magic happen against Jared Cannonier, but much like his spiritual predecessor Anderson Silva, “The Last Stylebender” needs a suitable dance partner to bring out the best in him. If Cannonier pierces through Adesanya’s aura and takes the fight to him, we could see either fighter deliver an exciting finish; if Cannonier is overly respectful, we could end up with a fight that more closely resembles Adesanya vs. Romero (apologies for bringing that up).

Much less likely to disappoint is the trilogy bout between Volkanovski and Holloway. Their second encounter, though controversial when it came to the scoring, was an instant classic that solidified both men as the very best at 145 pounds and their performances since have done nothing to dent their reputations. Volkanovski won an epic battle with Brian Ortega and then dusted “The Korean Zombie,” while Holloway held the gate against two top-10 challengers in Calvin Kattar and Yair Rodriguez to secure another crack at Volkanovski.

And there’s the rest of the loaded main card, which features Sean Strickland and Alex Pereira meeting in a match that could determine the next challenger for the middleweight title, welterweights Robbie Lawler and Bryan Barberena being booked in a surefire slugfest, and veteran bantamweight Pedro Munhoz looking to humble the popular Sean O’Malley.

Where: T-Mobile Arena in Las Vegas

I’ve got a bad feeling about this one.

Listen, I’m glad that Israel Adesanya and Jared Cannonier are saying all the right things. The champ wants to add to his highlight reel by making short work of a worthy challenger in Jared Cannonier, and Cannonier has let it be known that he doesn’t care about Adesanya’s supposed greatness. He’s here to win fights, which if you’ve paid attention to what Cannonier has done lately, he’s pretty good at!

Cannonier is more than a contender with only a puncher’s chance. He has great leg kicks, solid wrestling, and, yes, enough power to make Adesanya think twice about exchanging with him. Adesanya has a clear speed and reach advantage, but Cannonier has proven he can take a hit, which he might have to do to close the distance. I’m not suggesting he has to go full Gastelum, but some sloppiness could be to his benefit here.

However, Adesanya’s technical acumen will be on full display tonight and I fully expect him to snipe away at Cannonier for five rounds and not take a risk unless necessary. Adesanya has the skills to lead the dance, so why should he be the one to break rhythm? Winning on points is as good as any other method and Adesanya won’t shy away from it.

Cannonier can make this interesting if he fights a tad more reckless than usual, but I’m predicting a comfortable decision win for Adesanya.

The second fight between Alexander Volkanovski and Max Holloway was so close, it’s easy to see how “Blessed” can finally earn that elusive win over Volkanovski.

Holloway was one round away from winning the rematch after staggering Volkanovski in Rounds 1 and 2. We know he can touch Volkanovski’s chin. We know he can cut a pace that few can match. Does he have an extra gear that we haven’t seen yet? Possibly. He’ll need it.

It’s not just Volkanovski’s chin that’s top-notch, it’s his defense. That’s why it was so extraordinary when Holloway stunned him. Twice. But like all the great champions, Volkanovski adapts, and I’m confident that the 10 rounds he’s already spent in the cage with Holloway have given him a wealth of information with which to prepare for anything that Holloway has to offer. Outside of those scary moments in the rematch, Volkanovski has rarely been hit clean.

You don’t score points for defense, but it does keep you alive, and that’s the most important factor for Volkanovski especially through the first three rounds. He can’t fall behind early because one gets the sense that if Holloway smells blood this time, he’s going to push the pace until he takes Volkanovski out. Holloway won’t leave anything in the tank.

Even then, the best version of Volkanovski can get the win here. He’s more precise and powerful than ever, peaking at the right time both mentally and physically. This time, it’s Volkanovski who’s going to shock everyone by hurting Holloway and leaving little room for controversy on the cards. That doesn’t mean this won’t be competitive though as a wounded Holloway is a dangerous Holloway and you can bet he’ll be scrapping to the bitter end.

Don’t look now, but Sean Strickland is about to mix some martial arts.

While it’s not out of the realm of possibility that Strickland wins a striking battle against Alex Pereira, a two-division Glory kickboxing champion, he’s not getting paid extra to test that theory out. If he can get Pereira down or at least smother him against the fence, he should. Otherwise, he’s just asking to get his head kicked in.

Pereira has shown decent takedown defense in his brief MMA career and he has plenty of size to work with too, but I think Strickland can wear him down if he puts a heavy emphasis on wrestling. It won’t be pretty and it will draw some boos, but if you’re Strickland you have to be focused on winning and booking an increasingly intriguing matchup with Adesanya (assuming Adesanya takes care of business in the main event). Other than that, avoid Pereira’s clinch, mix it up inside when you can, and put him on his back.

For Pereira, it’s simple: keep this one standing and you win. As mentioned, Strickland is a great striker, but there’s no accounting for the high-level kickboxing experience that Pereira brings into all of his fights. “Poatan” finds a knockout or wins by decision if Strickland engages him on the feet. I think Strickland fights smart and takes the points and the win.

Another day, another UFC legend standing across from him looking to punch him into oblivion.

You think Bryan Barberena is having fun yet?

“Bam Bam” might never make it into the top 10 of the welterweight rankings and I’m assuming that doesn’t mean a damn thing to him anyway. As long as he’s allowed to step into the cage and swing freely against guys like Robbie Lawler and Matt Brown, he’s a happy man. He’ll have plenty of opportunity to trade bombs with Lawler on Saturday.

Though he recently turned 40, Lawler is still one of the most feared punchers in the division and for good reason. The former UFC champion combines high-level technique with the natural power that has made him a fan favorite for two decades. Barberena is tough to knock out, but if anyone can do it it’s Lawler.

It’s definitely tempting to go with Lawler here, especially if you think Barberena might actually just stand there and dare him to fire away. I choose to believe that Barberena will employ a modicum of strategy and at at least attempt to avoid one out of every, say, 10 punches or so. As long as he doesn’t eat a bowl-full of haymakers in Round 1, Barberena should have the cardio advantage and seek to push the pace for 15 minutes. Not that cardio has ever been a major issue for Lawler, but years of wars have taken a toll on him and Barberena’s clearest path to victory is to see just how much the “Ruthless” one has left.

Barberena gets the win and both guys probably get a well-deserved 50 G bonus.

Check out the lineup of killers that Munhoz has faced in his past six fights: Dominick Cruz, Jose Aldo, Jimmie Rivera, Frankie Edgar, Aljamain Sterling, and Cody Garbrandt. The fact that Munhoz was able to salvage two wins out of that schedule (and nearly three depending on how you scored the Edgar fight) is a minor miracle. So Munhoz’s supposed slump is deceiving.

Far and away, he’s the biggest test for Sean O’Malley yet, even more so than Marlon Vera was. Keep in mind that Munhoz has also fought Rob Font and Raphael Assuncao. The level of difficulty that he’s been competing at is another world compared to what O’Malley has faced so far.

None of that will matter once it’s just the two of them in the cage and I like O’Malley to continue to silence the doubters. He’s not as well-rounded as Munhoz, but his best skill is better than Munhoz’s best and as long as he keeps this on the feet he’s going to be a problem for the Brazilian veteran. His ground game is underrated too, so he can get out of trouble if Munhoz is aggressive with takedowns. Add in his reach and speed advantage and on paper this is good matchup for O’Malley.

Fighters like Munhoz are never that easy to put away though. The man can’t be finished and he’s going to give O’Malley fits as he marches through the best that “Sugar” has to offer. Munhoz is an excellent boxer, so look for him to cut off the cage, rough O’Malley up, and really test his opponent’s ability to control range. O’Malley can finish early or finish late, but can he earn a judges’ decision against an elite opponent? I’m skeptical.

Still, I look forward to him proving me and a lot of other people wrong as he goes the full 15 with Munhoz and earns a win by consistently landing the more damaging strikes.