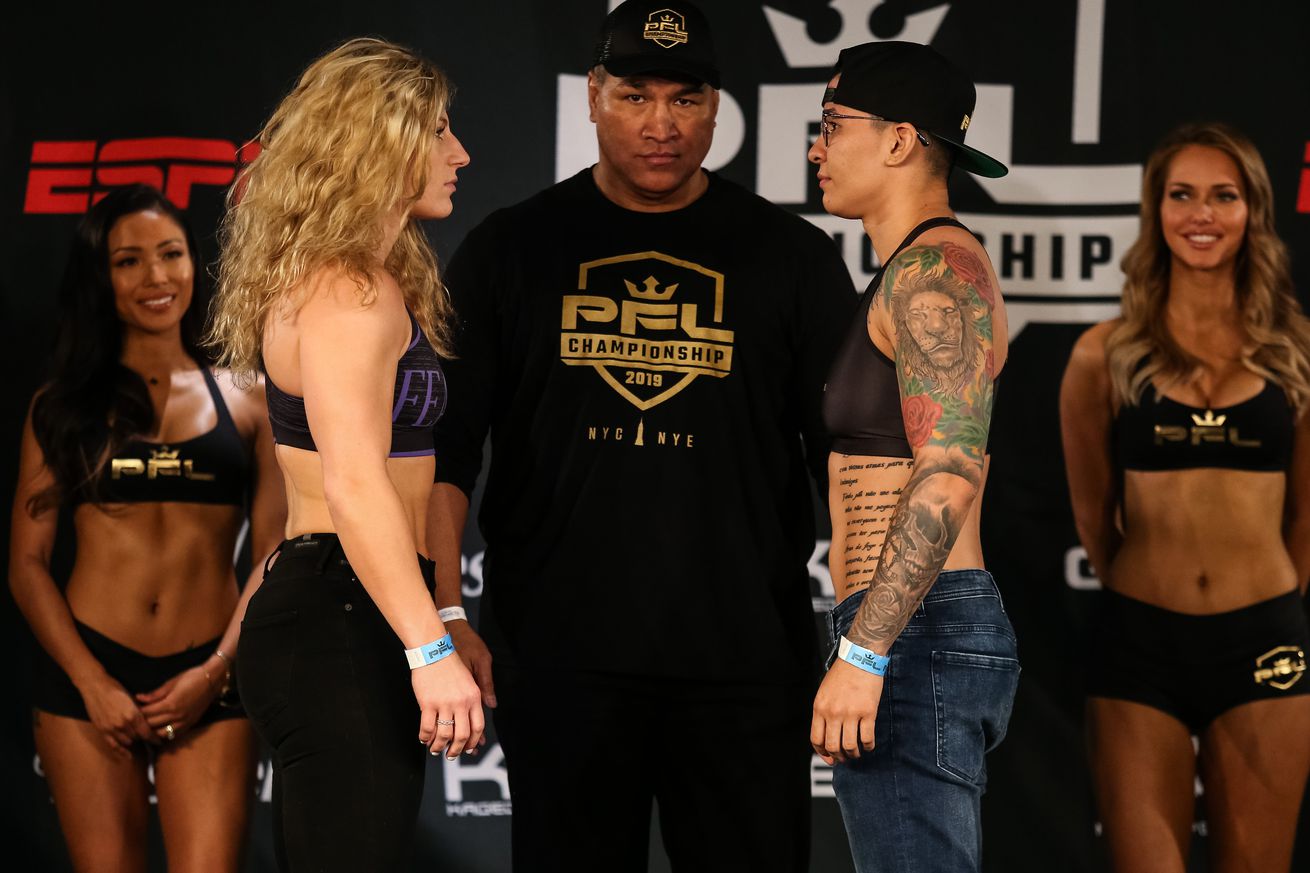 Kayla Harrison and Larissa Pacheco met in the PFL League lightweight finals in 2019, with two-time Olympic gold medalist Harrison taking home a million-dollar check in the end. As both fighters aim to advance to this year’s playoff semifinals, Pacheco admits she’s already looking ahead at a potential trilogy bout with Harrison.

Pacheco is 5-0 under the PFL when facing athletes not named Harrison, walking through Zamzagul Fayzallanova in 85 seconds in her first appearance this year, while the judoka kicked off this year’s season with a decision over Marina Mokhnatkina.

Pacheco and Harrison re-enter the cage Friday against Genah Fabian and Kaitlin Young, respectively, and the Brazilian explained on this week’s MMA Fighting podcast Trocação Franca what it would mean for her to get a third date with Harrison.

“Kayla is not my opponent, like, ‘I wanna fight her,’ but she’s in front of us,” Pacheco said. “She’s the champion, so I’m here to win and get this belt regardless of the [$1,000,000] prize. This is my job, this is what I love doing. This is my life, really. I’ve been doing this for 13 years, dedicating my life and my time and sacrificing moments with my family for a job I love doing.

“I want to be recognized as one of the best in fighting. I also want to make history in MMA. Beating Kayla will boost my name because she’s currently the best in the 155-pound division. I want to win, that’s what I’m here for. If she’s in front of me, she’s the one I’ll beat.”

Pacheco met Harrison twice in 2019, with Pacheco being the only MMA fighter to take the American Top Team star to a decision before the 2022 current season. The first match was Pacheco’s first under the PFL banner and her lightweight debut after a failed run as a featherweight on The Ultimate Fighter 28. The rematch took place seven months later, after she defeated Bobbi Jo Dalziel and Sarah Kaufman, and Pacheco recalls dealing with health issues related to a bad weight cut.

As for the “exaggerated” hype around the American Top Team star, Pacheco feels it makes no sense to call Harrison one of the world’s best pound-for-pound fighters in MMA, let alone mention her name in a discussion of the sport’s all-time greats.

“Too much marketing, way too much marketing,” Pacheco said. “Most of the time she’s won against inexperienced girls. I think it’s just a lot of marketing because she’s the beauty standard, that standard that all Americans love and the world has to love too because she’s just too good. They deify her way too much, but she’s only a judo fighter. She does perfectly what she’s been doing her entire life, which is judo. We can’t deny that. But, in all other aspects of MMA, MMA being a sport that mixes every martial art, her game is weak.

“She only does one thing. She might do that perfectly, but that’s all she does. Her fights are boring, they are not interesting to watch. The problem is that they have all that marketing over her, deifying this athlete. But I don’t think she’s the world’s best pound for pound. There are athletes who are 1,000 times better than her. In fact, I think my game is much better than hers. I go out there and fight and deliver regardless of getting punched or kicked or taken down. I go out there and give my all because this is what people want to see. We don’t go to a MMA event to see people studying each other the entire time. We go there to watch fighting. That’s the way things are since the beginning of times, when people were thrown in an arena to battle.”

“I think she talks too much,” Pacheco continued. “I don’t know if her mind is weak and she needs to keep saying things to feel better about herself but I don’t think she beats Amanda [Nunes] or [Cris] Cyborg. She’ll have to do that boring game, grabbing and taking [them] down, but I don’t think she has what it takes [to win]. I don’t think she’s capable of beating these two high-level athletes, who have a well-rounded game and way more experience than her.”

Pacheco was removed from the 2021 playoffs after failing to make weight for a clash with Taylor Guardado. She said that those issues on the scale are in the past after working with a psychologist. After sharing the PFL cage with Harrison for eight rounds, Pacheco believes she has learned a thing or two that will make the difference if they meet again later this year.

“If we go to the ground, which I think is what she’ll try to do, I’m getting ready to block that and defend her takedowns,” Pacheco said. “I believe in my hands. I think I’m quite capable of knocking her out.”