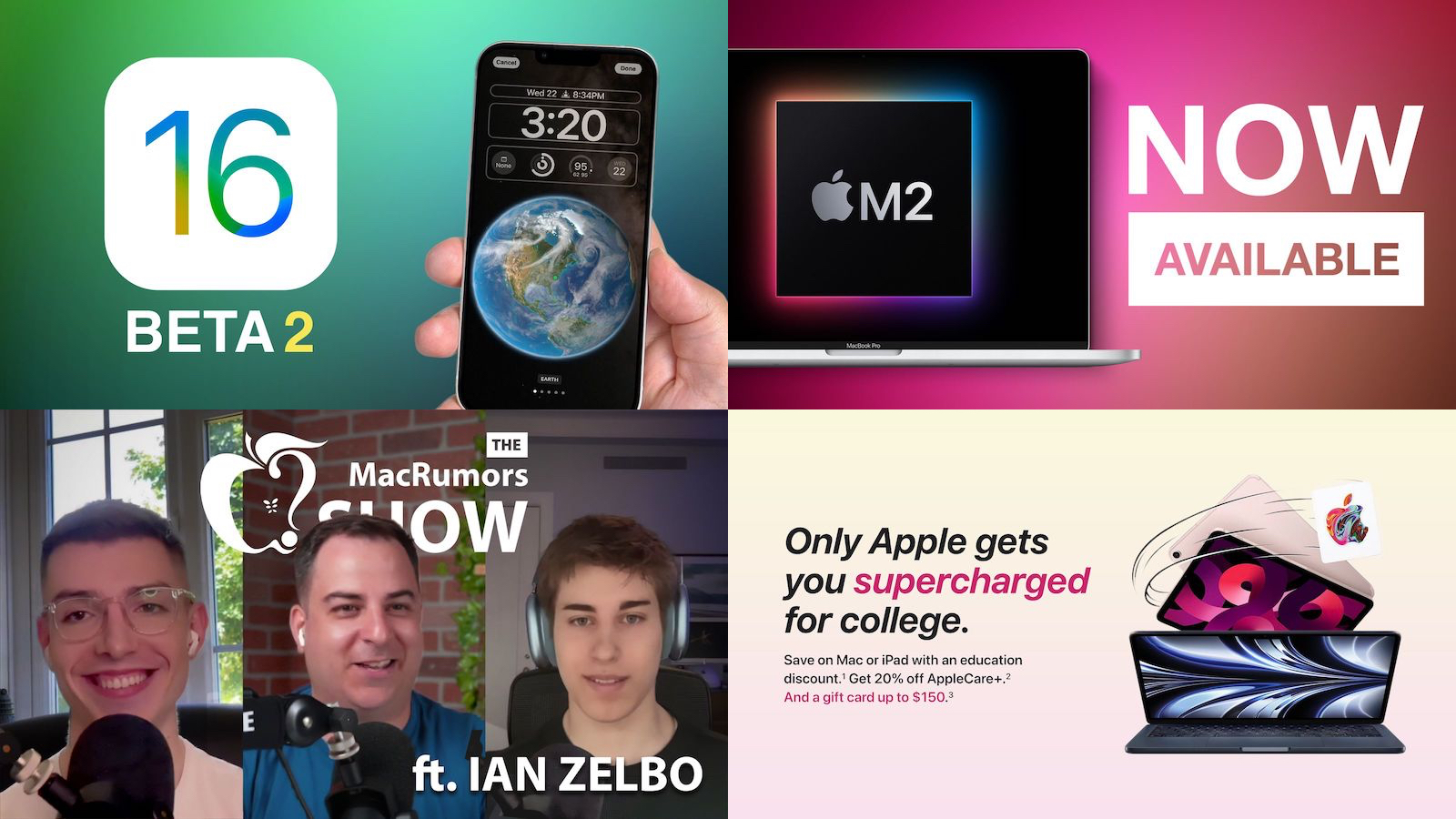 Apple this week rolled out its second developer betas of iOS 16, macOS Ventura, and related operating system updates, delivering some initial tweaks compared to the first beta. We should see the first public betas in another couple of weeks around the same time as the third developer betas, offering much wider access to the updates.

This week also saw the launch of the new 13-inch MacBook Pro, which is Apple’s first Mac to feature its M2 chip, as well as the annual Back to School promotion for education customers, so read on for all the details on these stories and more!

Apple seeded the second beta of iOS 16 and iPadOS 16 to developers this week for testing, and there are several new features and changes, including new Lock screen wallpaper colors, iCloud backups over LTE, improved filtering in the Messages app, and more.

We’ve put together a list of everything new in iOS 16 beta 2 for a complete overview of added features and changes.

The new 13-inch MacBook Pro with a faster M2 chip launched on Friday and is now available in Apple’s retail stores. Ahead of time, early reviews of the notebook were shared by some YouTube channels and media outlets, offering a hands-on look at the performance improvements.

While the new 13-inch MacBook Pro is up to 20% faster than the previous model, most reviews suggest waiting for the new MacBook Air with the M2 chip to launch next month.

Apple concept graphic designer Ian Zelbo joined us on The MacRumors Show podcast this week to discuss what to expect from the design of the upcoming iPhone 14 Pro, Apple Watch Series 8, and Apple’s long-rumored mixed-reality AR/VR headset.

Listen to The MacRumors Show via Apple Podcasts, Spotify, Overcast, Pocket Casts, Castro, Google Podcasts, or wherever else you get your podcasts from. You can also watch a video version of the podcast on our YouTube channel.

As rumored, Apple on Friday launched its annual Back to School promotion for students in the U.S., Canada, and several Asian countries.

The first two betas of iOS 16 include code-level references to what appears to be a new and unreleased version of the Siri Remote for the Apple TV.

One of the references is for a “SiriRemote4,” which does not correspond with any existing Siri Remote, leading to the possibility that it could be a new Siri Remote for a future Apple TV — perhaps the lower-cost model rumored to launch in the second half of 2022?

Tapping on images of traffic lights or deciphering squiggly text to prove you are human will soon be a much less common nuisance for Apple users, as iOS 16, iPadOS 16, and macOS Ventura are able to bypass CAPTCHAs in supported apps and websites.

In the iOS 16 and iPadOS 16 betas, the useful new feature can be found in the Settings app under Apple ID > Password & Security > Automatic Verification.