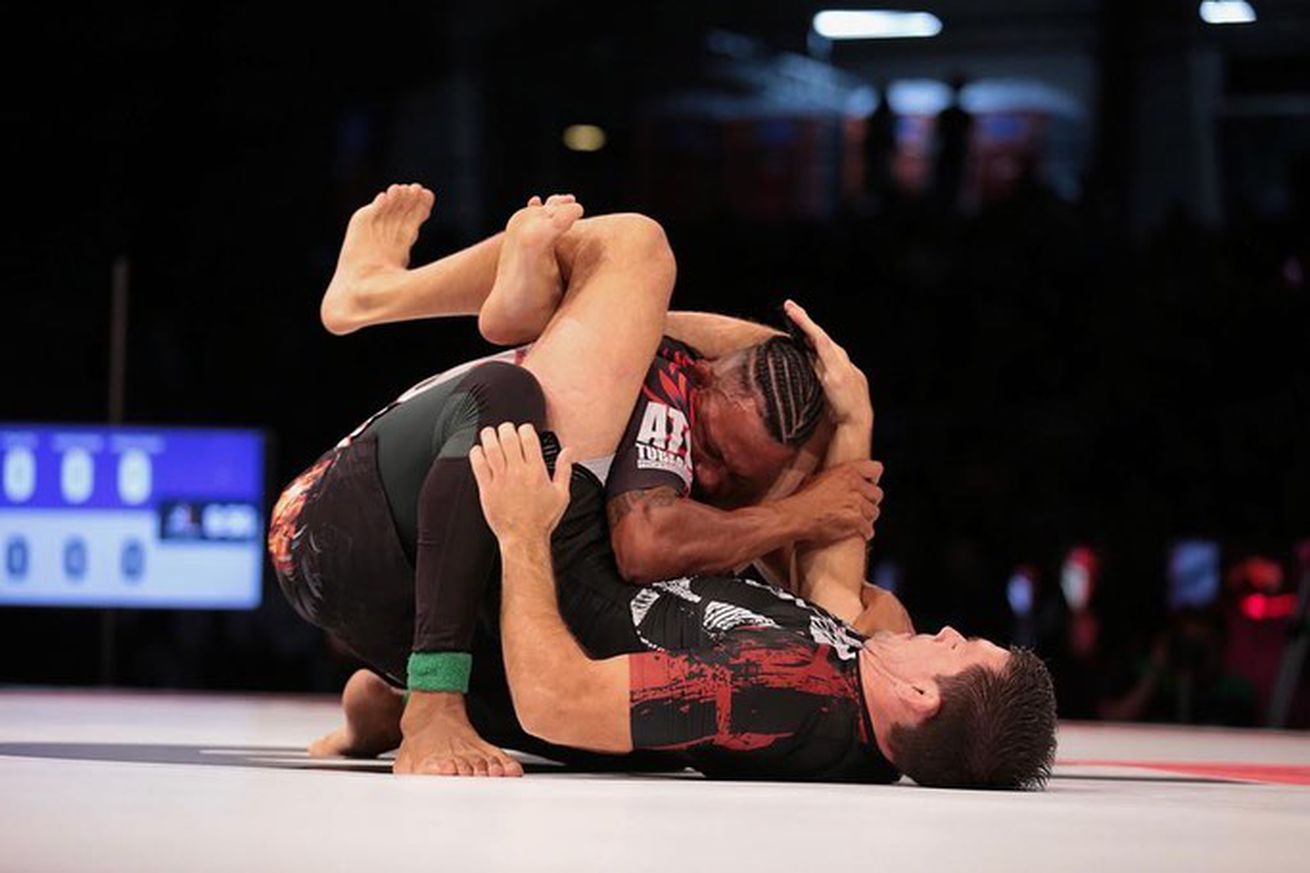 Demian Maia submitted Alex Oliveira in his return to grappling in Brazil. | Photo via BJJ Stars

Demian Maia is sticking to grappling after a long UFC career.

The 33-time octagon vet is set to face former UFC and WEC champion Benson Henderson, who steps on the mat to grapple him on Saturday at Polaris 20 in the U.K. It’s one of many unique grappling challenges Maia hopes to face against fellow MMA standouts.

Maia traveled to New York and Belem, Brazil, to work with the legendary Marcelo Garcia and rising talent like Mica Galvão ahead of the Polaris 20. Yet, he doesn’t expect Henderson to bring the most up-to-date techniques into this weekend’s jiu-jitsu matchup.

“There’s something MMA fighters have but jiu-jitsu guys don’t, and it’s the ability to do an anti-game very well,” Maia said on this week’s episode of MMA Fighting podcast Trocação Franca. “MMA guys, if they don’t have to go in your guard, they won’t. They don’t accept positions, they explode out of positions like crazy. Meanwhile, jiu-jitsu guys will sometimes think about it for a moment, which makes things a little bit easier. MMA guys will simply explode out of a position like crazy — sometimes they will fall into a trap, but many times they make things more difficult.”

Maia returned to grappling in April, just 10 months after his final UFC appearance, and tapped fellow octagon veteran Alex Oliveira with a triangle choke in Sao Paulo, Brazil. According to the two-time UFC title challenger, going from MMA to grappling allows you to use several techniques that wouldn’t be an option for MMA bouts.

“There are certain positions you don’t do in MMA because it leaves yourself too exposed, especially if you’re off your back,” Maia said. “It’s too dangerous to do in MMA, and you can do in jiu-jitsu. It gives you different possibilities when you don’t have a punch coming your way.”

In the past, MMA veterans grappling against decorated jiu-jitsu players has sometimes resulted in lackluster matches, such as when Brendan Schaub infamously fought to a draw with ADCC champion Roberto “Cyborg” Abreu. Henderson, however, has been active in grappling throughout his Bellator career, most recently defeating Ben Saunders in a no-gi contest in Las Vegas, so Maia doesn’t expect Henderson to play Schaub’s game.

“I hope he doesn’t [stall], otherwise it’s too boring for the promotion and the audience,” Maia said. “In my case, in MMA, sometimes I would chase the guy the entire time, and it would be a boring fight because he was doing an anti-game, and that wasn’t my fault. I never ran away from a fight, you know? When I lost, I would always try. Some people say, ‘Oh, Demian had that boring fight,’ but it wasn’t my fault, my opponent would just do an anti-game and not engage to try to knock me out.”

“[Henderson] goes for ankle locks and some guillotines,” he continued, “but I think he’s very good defensively too. He defends his back really well. He has good jiu-jitsu game and competes a lot, has experience. He’s a good jiu-jitsu guy.”

Maia hasn’t ruled out entering regular jiu-jitsu tournaments in the future after experiencing the atmosphere of a jiu-jitsu event in Sao Paulo.

“In jiu-jitsu, you only depend on yourself,” he said. “MMA is different. MMA is a show business, it’s not just a sport, and it depends on you pleasing the promoter so they put you in an interesting fight. Is there a sportive side of it? Yes. Can you earn it? Sure. But it’s not only up to you. In jiu-jitsu, I don’t depend on someone liking me so I can compete in the Worlds or Pan-American, for example.”

As someone who started his transition from pure grappling to MMA two decades ago, Maia likes what he’s been seeing from fellow jiu-jitsu legend Marcus Buchecha, who is 3-0 as a heavyweight in ONE Championship. Maia said Buchecha is showcasing such a “consistent” game, he has all the tools needed to become the future of jiu-jitsu in the cages.

“‘Leozinho’ [Vieira], his coach, helped me in a few camps, and he’s seen the way we train, and I think he’s implementing that in Buchecha’s training,” Maia said. “If he’s able to maintain that consistency and know how to use his jiu-jitsu at the right time without becoming a striker and train the right way to get where he needs to be, I think he can become a great champion and jiu-jitsu representative like I was, like Charles [Oliveira] is.”

Buchecha is not the first — and won’t be the last — jiu-jitsu great to jump into MMA and vale tudo. The sport has seen legends try them in the past, but not really dive head first. Maia named Andre Galvao, Marcelinho Garcia, Alexandre Ribeiro and Roger Gracie, who have 28 jiu-jitsu world titles and 13 ADCC golds medals combined, as the sport’s biggest what-ifs.

“They are fighters who ended up not doing it because they were doing so well in jiu-jitsu, [and] with a life structured around jiu-jitsu with gyms, seminars and classes, that it’s just so hard to drop it and do [MMA],” he said. “They were great champions in jiu-jitsu but ended up not giving the sport a chance because they were like, ‘I’ll have to drop everything to train MMA, stop making money and teaching seminars and classes, leave my gym aside, and the promoter ends up liking me or not?’”

Galvao fought seven times in MMA between 2008 and 2010, going 5-2 with his final bout being a loss to future champion Tyron Woodley at Strikeforce. Gracie, 8-2 in MMA, came up short in his sole UFC bout to Tim Kennedy, but retired as the ONE Championship light heavyweight titleholder. Garcia’s only appearance in a cage ended in a doctor’s stoppage loss to Dae Won Kim at K-1 Hero’s in 2007, while Ribeiro decided not to continue in the sport after back-to-back knockout wins in Sengoku in the late 2000s.

“I’d be very curious to see how they’d do if they have continued,” Maia said. “Life took them someplace else. Surrounded by a structure focused on their styles, I’m sure there’s no way it would go wrong after everything they have accomplished in jiu-jitsu.”

Maia said fighting in MMA for nearly two decades has given him plenty of knowledge to coach fellow grapplers in the cage. He’s more than happy to open the doors of his Sao Paulo gym to welcome the likes of Mica Galvão, Felipe Pena, and Fellipe Andrew if they decide to make the jump one day.

“They have to know if they really like it, if they want it,” Maia said. “If you’re doing just for fame and money, it doesn’t work, because you have to like [fighting] first. If they like it, I’m sure that, God willing, I still can give them a little help.”