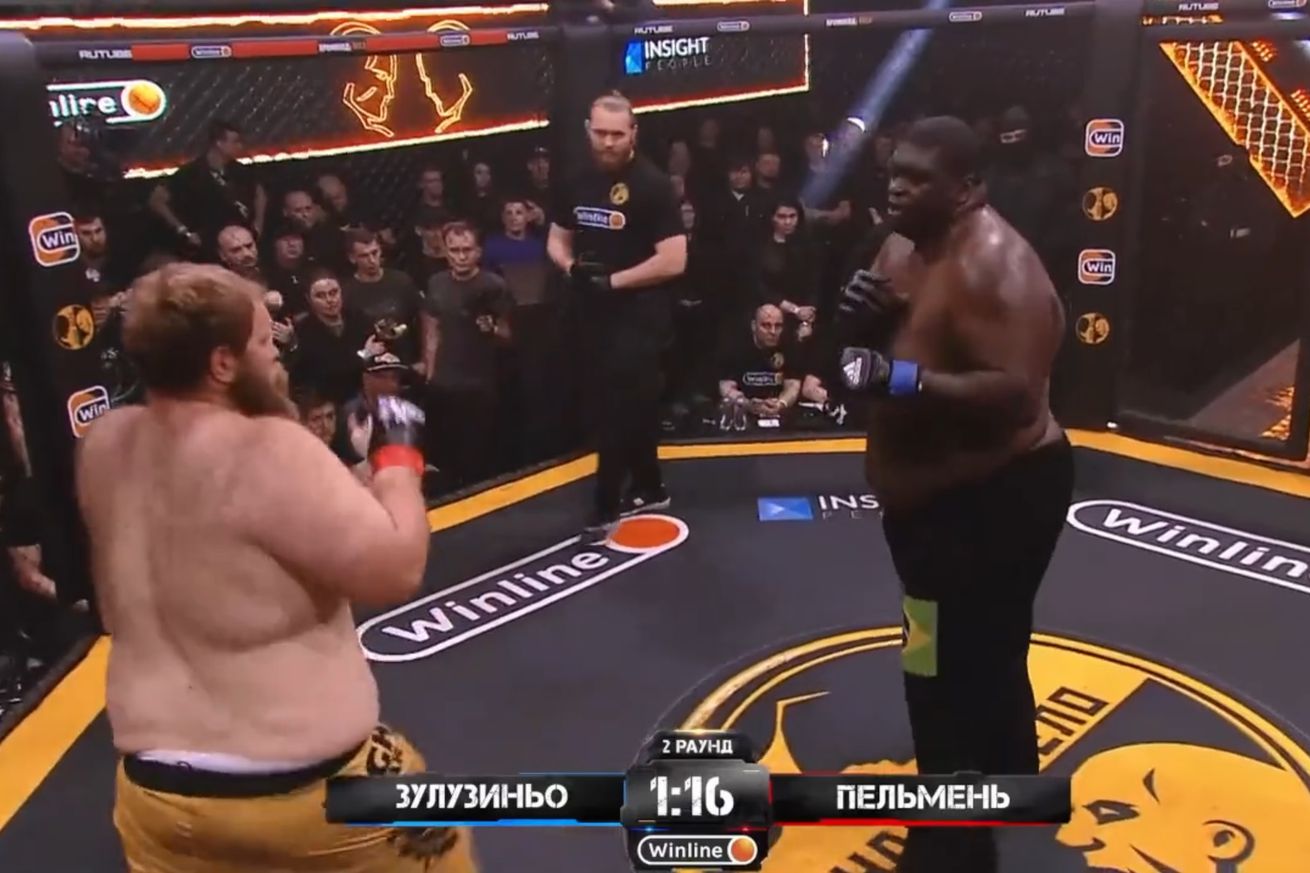 This past weekend everyone was talking about The Match.

Two giants of the industry who have shared the combat sports stsage with fellow legends on countless occasions. Two men at the peak of their fighting powers. Two titans who are instantly recognizable by one name.

For the record, when we’re talking about fighting legends, that’s not even an exaggeration with Zuluzinho. He’s been in there with Fedor, Big Nog, and Butterbean! And now he can add another name to that list with “The Dumpling,” a slap fighting star who has also dabbled in bare-knuckle boxing. Since Vasily Kamotsky seems willing to sign up for anything, why not a staring contest?

Because that’s essentially what his three-round boxing bout with Zuluzinho devolved into according to freak show fanatic @Matysek88. You can get a glimpse of the (in)action above.

It’s unclear why Kamotsky and Zuluzinho were unwilling to let their hands go. Maybe they just respected each other’s power. Maybe they were both making guaranteed bank for the matchup and it didn’t matter who won or lost (Kamotsky won a decision, apparently). Maybe they were paying homage to the worst UFC championship fight of all time (Esparza vs. Namajunas 2 or Dan Severn vs. Ken Shamrock 2, take your pick).

Either way, this is just the latest bizarre chapter in Zuluzinho’s one-of-a-kind — and surely DAMN! They Were Good-worthy — career. Let’s not forget that just 14 months ago the PRIDE veteran lost a decision following a hilarious premature celebration.

If you want to go further down the rabbit hole, Kamotsky vs. Zuluzinho was actually a rematch as the two previously battled to a tie in a slap contest fight (h/t @GrabakaHitman). You can watch that here:

If you want to see more from Nashe Delo Fights, you can check out their YouTube, which regularly posts full events.

And if you still want to see more Kamotsky and Zuluzinho, then seek professional help.

Our front-runner for Knockout of the Week comes to us from Naciones MMA 7 in Monterrey, Mexico, and is actually the result of a submission. Alan Castro went all in on a triangle choke, trapping his opponent beautifully and outworking him until he went to sleep.

Even better, this spectacular submission happened in a sweet, sweet postlim.

While that finish seemed inevitable, this next clip was surprising even to the victor himself.

Fabrizio “El Cachorro” Escarrega improves to 4-0 with a brutal left hook KO over David Fuentes in just 38 seconds. Man he caught all of that one #Naciones7 pic.twitter.com/DOk7FB66CQ

Fabrizio Escarrega looked like he was throwing an advancing combination to set up a big right hand, but his left landed on point and his opponent David Fuentes was clearly toast just 38 seconds into the fight.

Naciones MMA 7 is available for free replay on Facebook.

While we’re south of the border, let’s hop on over to Puebla, where pro debutante Itzel Padilla also seemed surprised by her finishing strike.

High kicks are definitely trending. Itzel Padilla just scored another in her pro debut on the LUX prelims earlier. pic.twitter.com/nJhfhLynfG

That’s like an “excuse me” head kick KO, though it was a fine stoppage as it’s obvious Tapia had no idea where she was after that shot connected.

Forget what I said earlier about Castro having the best knockout because we actually have a bunch of knockout knockouts that are worth crowing about.

Aleksandr Vertko captured a vacant lightweight title with this nasty flurry capped off by Muay Thai Knees From Hell. Russia’s Vertko just turned 26 this past April and he has now won 10 straight fights.

That full fight and others are available to watch on YouTube.

Meanwhile, over at Croatia’s Fight Nation Championship (not to be confused with National Fighting Championship, duh), heavyweight Ivan Vitasovic broke out an absolutely heinous head kick.

That’s not just any jabroni he took out either, it’s you-name-the-promotion veteran Oli Thompson!

That full fight and more from FNC is available on YouTube.

At Fight Exclusive Night 40 (guys, we’ve really got to talk about these promotion names) in Ostroda, Poland, we had a trio of notable knockouts.

He catches him on the chin and you can practically see the impact travel outward from there, especially in the slo-mo footage.

Middleweight Piotr Kuberski also walked out with gold as he turned it up and put it on Marcin Naruszczka in the first round to capture a vacant title.

Naruszczka (23-12-2) was pretty much lined up for Kuberski (10-1), though he does have respectable wins over Eric Spicely, Matt Horwich, and Abu Azaitar. Still, it’s Kuberski whose star is on the rise after picking up his seventh straight win.

Opening the main card, Szymon Dusza set up his win with a beautiful knee up the middle, but geez, he was allowed to land a lot of shots to the back of the head after:

Jungle Fight 108 (free replay available on YouTube) also had its share of title fight triumphs and fast finishes, courtesy of Julio Pereira and Alexandre Castro (with an assist from a cautious referee).

In the main event, Pereira scored his first featherweight title defense with a right hand bomb followed by some devastating ground-and-pound.

Pereira, 24, has now won four in a row by knockout.

The fastest finish of the night officially went to Alexandre Castro after he dropped Elifrank Cariolano with a flying knee, but this definitely looked like an early stoppage.

In fairness to referee Flavio Almendra, Castro and Cariolano are a bit up there in age (Castro is 40, Cariolano is 37) so he could have been wisely erring on the side of safety here. That knee landed flush.

Last week had a case of karma in action as a fighter landed an amazing knockout punch just moments after taking one between the legs and this week’s retaliation finish might be even better.

Alexander Osetrov did not take kindly to Willian Lina’s fake-glove-touch-leg-kick and in another case of “if they go low, we go high,” he answered in kind with a head kick that immediately dropped Lima to the canvas. He pounced on Lima and patiently attacked with ground-and-pound to earn the 45-second finish.

In the main event, Bellator’s Andrey Koreshkov was on loan and frankly I find his involvement in these things offensive.

What a mauling by The Spartan. Andrey Koreshkov drops heavy GNP on Leonardo Cavalheiro for the 2nd round TKO #SFC4 pic.twitter.com/aHByXFbiOk

The last time we saw the former Bellator welterweight champion, he was forcibly rearranging Chance Rencountre’s insides. Koreshkov has been permitted to take fights with other promotions so not only is he dishing out beatings in Bellator, there is apparently almost no limit to what he is allowed to do in other people’s cages as well.

Koreshkov is an international menace, is what I’m saying.

Shlemenko Fighting Championship 4, which took place in Omsk, Russia, is available for free replay on YouTube.

If you know of a recent fight or event that you think may have been overlooked, or a promotion that could use some attention, please let us know on Twitter – @AlexanderKLee – using the hashtag #MissedFists.