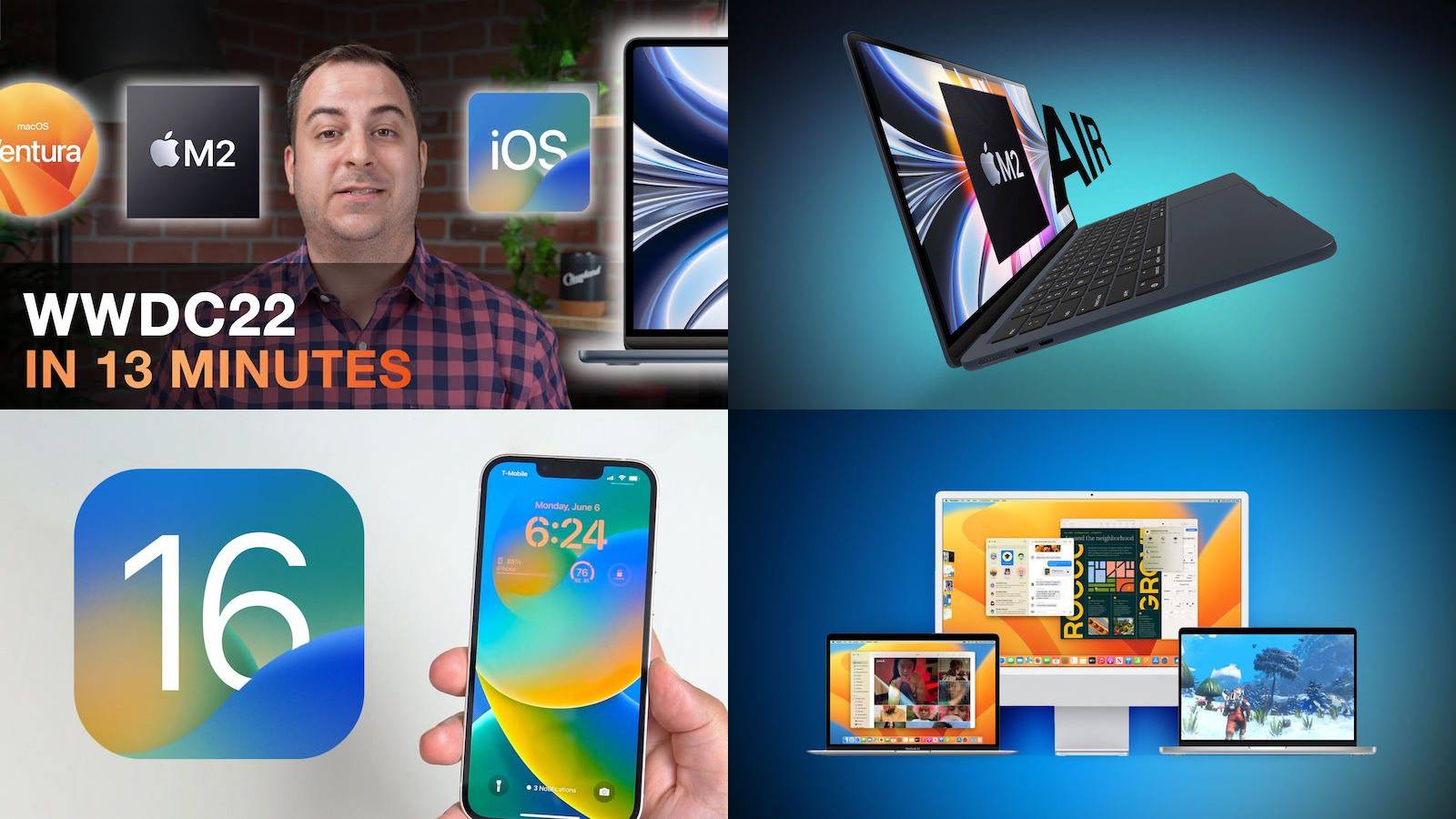 Whew, what a week! We’re still recovering and trying to absorb all of this week’s WWDC announcements, as in addition to jam-packed segments devoted to Apple’s various operating systems, we also got some new hardware with the introduction of the M2 chip and a couple of new Macs running it.

We’ll have the next several months to dig through Apple’s software updates before they launch to the public, and the new M2-based hardware won’t be available until next month, so there’s lots more to come. And of course, we’re already hearing fresh rumors about upcoming products, so stay tuned!

Everything Apple Announced at the WWDC 2022 Keynote in 13 Minutes

Apple kicked off WWDC 2022 this week with a keynote, where it announced a wide range of new hardware and software. On the hardware side of things, Apple unveiled a redesigned MacBook Air and a new 13-inch MacBook Pro, both powered by its all-new M2 chip.

As for software, Apple previewed iOS 16, iPadOS 16, macOS Ventura, and watchOS 9, which are each packed with a long list of new features. While not mentioned during the keynote, there is also a tvOS 16 update for the Apple TV with a handful of new features. All of the updates are currently in beta and will be publicly released in the fall.

We’ve put together a video recapping the WWDC keynote in just 13 minutes.

The next-generation MacBook Air with the new M2 chip features a redesigned enclosure with flatter edges, a brighter 13.6-inch display with a notch, new color options like Starlight and Midnight, MagSafe charging, a 1080p camera, and more.

With the M2, the MacBook Air is available with an 8-core GPU and up to a 10-core GPU. The notebook can be configured with up to 2TB of SSD storage, along with up to 24GB of memory. Pricing starts at $1,199, with orders to begin next month.

Apple also announced an updated 13-inch MacBook Pro, with the only notable change being the addition of the M2 chip.

Apple has unveiled iOS 16 with a long list of new features for the iPhone, including a redesigned Lock screen that can now be customized with widgets, custom fonts and color options, and more.

We’ve put together a video showcasing the biggest iOS 16 features, including the ability to temporarily unsend or edit iMessages. Check out our iOS 16 roundup for everything that you need to know about the update.

iPadOS 16 includes many of the same new features introduced in iOS 16, in addition to new collaboration and multitasking features, a Weather app, and more, and we went hands-on with some of our favorite new features.

On iPad Pro and iPad Air models with an M1 chip, a new Stage Manager feature automatically organizes apps and windows to make it quicker and easier to switch between tasks. As part of Stage Manager, M1 iPads have gained full support for external displays with up to 6K resolution.

The latest release of macOS is named Ventura, and one of the coolest new features coming in the update is Continuity Camera, which lets you use an iPhone as your Mac’s webcam.

Other new macOS Ventura features include Stage Manager, expanded support for game controllers like Nintendo’s Joy-Cons, a redesigned System Settings app, the addition of Clock and Weather apps, and more.

watchOS 9 enhances the Apple Watch with a range of new and updated watch faces, additional metrics in the Workout app for fitness tracking, greater insights into sleeping patterns, and more.

The update will also make it easier to track your medications on the Apple Watch, and a useful new accessibility feature lets you stream your Apple Watch’s display to your iPhone and fully control the watch using assistive features on the iPhone like Switch Control and Voice Control.