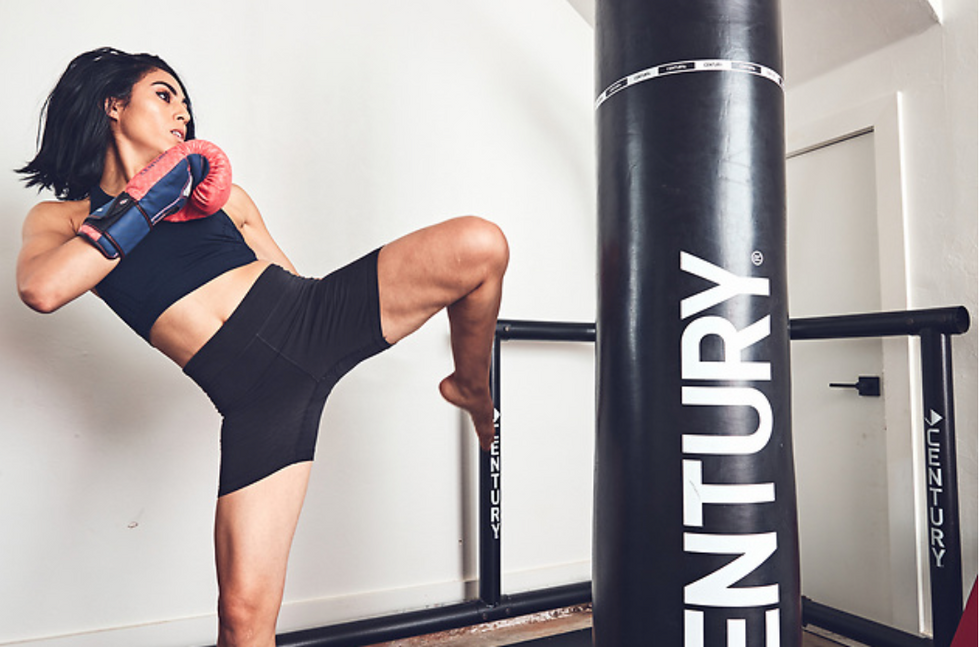 In Thailand, fighters train twice a day, usually six days a week. They spend hours a day developing their cardio, power and strength. While weight training isn’t that popular in Thai-boxing camps, calisthenics certainly are.

In this post, I will look at some — but not all — aspects of strength and conditioning that are essential for success in muay Thai. To make things easier, I will provide examples of how you can do it yourself.

Cardio is a controversial part of muay Thai conditioning. There are at least two schools of thought. The first is that cardiovascular exercises like running and skipping rope will improve your overall performance in the muay Thai ring. The idea is that the better your cardio is, the better it will cross over to all aspects of life.

The other school of thought is that time spent running and skipping rope is time wasted because it’s time that could have been spent doing sport-specific cardio — like heavy-bag work and sparring. If you want to improve your conditioning for muay Thai punching and kicking, the best way is to practice punching and kicking for long periods of time, according to the argument.

Which one is correct? The jury is still out. Therefore, I recommend erring on the side of caution and engaging in both forms of cardio training.

Keep in mind that there are also people who argue that all running is a waste of time.

In Thailand, fighters usually run long distance — although Andy Howson in an online seminar with Diesel Gym London said that the Thai fighters he trained with didn’t actually do it. They went and had a cigarette instead.

That said, because Thais have on average 50 training sessions a month, it might not be the fairest comparison.

My suggestion is to skip rope either on gym mats or with suitable shoes that will absorb the shock you feel from hitting the ground. Work your way up to five rounds of three minutes each.

When doing sport-specific cardio like heavy-bag and pad work, my philosophy is that you should train for two extra rounds that you will never have to fight. If you’re competing for three rounds, five rounds on the pads should be your goal. If you’re aiming for a five-round fight, you should be doing seven rounds.

Some trainers might recommend more than this, but I like to have my amateur muay Thai competitors work toward this goal.

Fortunately, this is something everyone agrees on. Explosive sports require explosive movements in training. Muay Thai requires legitimate striking power, and the best way to develop this outside of practicing muay Thai is to gear some workouts specifically toward being able to explode.

There are multiple routes to this goal, including Olympic-style weightlifting, sprinting and plyometric variants of tried-and-true exercises like push-ups and squats. One example is beginning a push-up routine with clapping push-ups to engage the fast-twitch muscle fibers in the chest and arms. That translates directly into speed and power.

Even more important are exercises like jumping squats and jumping switches. When you jump in the air from a squat position or, in the case of switches, when you squat down and then explode up while switching the position of your feet (as in a switch kick), you build explosive power in your legs and hips. That directly translates into kicking power.

A more sport-specific way to engage in plyometrics is to throw 10 power kicks at full speed into the heavy bag — with each leg. Take a 45-second rest, then repeat. Each time, aim to hit the bag as hard and fast as possible.

You can have someone run a timer while you aim to land all 10 power kicks in less than a specified amount to time. As you improve, gradually decrease the time you have to do the drill. And consider doing it with punches and knee strikes, as well.

This is the final aspect I will discuss here, but remember that there’s much more to conditioning for muay Thai than just these three topics. The reason I want to emphasize pulling strength is it’s what gives you both punching power and strength in the clinch.

Muay Thai clinching is built around two things: trying to pull your opponent around the ring and off-balance, and wrenching down on your opponent’s head to land powerful knee strikes. Either way, you need a lot of strength in your arms and lats.

The best way to build this is through pull-ups. If you’re not able to perform one pull-up, you’re not clinching at your full potential. There are two specific types of pull-ups that I recommend for my fighters.

The first is the standard military pull-up. This will build general strength in the lats and biceps.

The second is the commando pull-up. It more closely resembles the double-collar tie used in muay Thai, and it directly engages all the muscles that are involved.

Earlier, I mentioned that pulling strength is what generates punching power, and while that might raise some eyebrows, I stand by it. A powerful punch is not generated by pushing your arm out; it’s generated by the whirl of your shoulders, by pulling your core, hip and trunk back to force the opposite side through the target.

So how do you develop this? The easiest way is with resistance bands. Loop a resistance band around something sturdy at shoulder height or slightly higher. Move back far enough to produce tension in the band, then assume your fighting stance with the band in your rear hand.

Pull with that rear hand while you throw a lead hook. Repeat in sets of 10, then switch to your other side.

This pulling will have direct carryover into your punching power because it loads resistance to the muscles that actually engage when you punch. This does what people think dumbbell punches do.

Keep in mind that these are only a few aspects of strength and conditioning that I value for my own training and for the training of others. They are far from the be-all and end-all of muay Thai training. Try them out and see how they work for you.