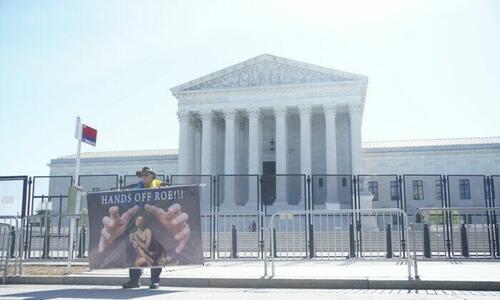 A group of 12 House Republicans introduced a bill in Congress this week that would make knowingly sharing confidential information from the Supreme Court a crime punishable by a fine or as many as five years in prison.

A double layer of barricades surrounds the U.S. Supreme Court in Washington, D.C., on May 10, 2022. (Jackson Elliott/The Epoch Times)

The legislation comes a month after a leaked draft majority opinion indicated the Supreme Court was preparing to overturn Roe v. Wade, the seminal 1973 precedent that federalized abortion policy, overriding the states and making the procedure lawful throughout the entire United States. The landmark 7-2 decision held that a woman’s right to an abortion was safeguarded by her right to privacy under the Fourteenth Amendment. Politico published the draft decision written by Justice Samuel Alito in Dobbs v. Jackson Women’s Health Organization on May 2.

Left-wing critics were outraged that the high court is considering overturning Roe v. Wade, while conservatives were angered that the leak, perpetrated by a person or persons still unknown, appeared calculated to inflame public opinion and persuade the justices to reconsider reversing the 49-year-old abortion precedent. Some have argued the unprecedented leak of the full opinion is a kind of terrorist attack on the judicial branch of the federal government.

“The unauthorized leak of the draft opinion in Dobbs v. Jackson Women’s Health constitutes a grave breach of judicial ethics and a deliberate attack on the independence of the Supreme Court,” Johnson said in a statement.

“This legislation is now, unfortunately, a necessary step to discourage future such attempts to intimidate justices during their deliberative process and restore independence to the Court so that it can ensure the American people are afforded equal and impartial justice under the law,” Johnson said.

“The institution of the court has been damaged and we must do what we can to try to repair it.”

Supreme Court law clerks, who assist the court’s nine justices, have been asked by court investigators to produce personal cellphone records and swear affidavits. Some clerks are reportedly considering retaining outside legal counsel to safeguard their legal rights, according to CNN.

A legal expert consulted by The Epoch Times said the proposed Leaker Accountability Act seems like a good idea.

Curt Levey, president of the Committee for Justice, said in an interview that federal laws already prevent employees in the government’s executive branch from leaking certain information.

“Why should that not apply to [Supreme Court] clerks as well?”

The leak has “shaken the collegiality of the court and trust in the court,” Levey said. This bill “could definitely restore that.”

“I would definitely think [the bill is] a step in the right direction,” Levey said, adding he hoped it would enjoy bipartisan support.

“I know that there’s plenty of people on the left who consider the leaker to be a hero,” but they should realize “the next leak could come from a conservative clerk, assuming this one came from a clerk.”

“This is not a conservative or liberal bill,” Levey said. “It’s common sense.”

Levey’s nonprofit describes itself as “devoted to restoring the Founders’ vision of a federal judiciary governed by the rule of law and anchored by the Constitution.”

It is unclear when the Supreme Court will release its decision in Dobbs v. Jackson Women’s Health Organization. At issue is Mississippi’s Gestational Age Act, which allows abortions after 15 weeks’ gestation only for medical emergencies or severe fetal abnormality. Citing Roe v. Wade, lower courts held that the state statute was unconstitutional.

Oral arguments in the Dobbs case were heard by the Supreme Court on Dec. 1, 2021.

2022.06.30 0
Biden Announces Permanent US Base In Poland, America’s First On NATO Eastern Flank