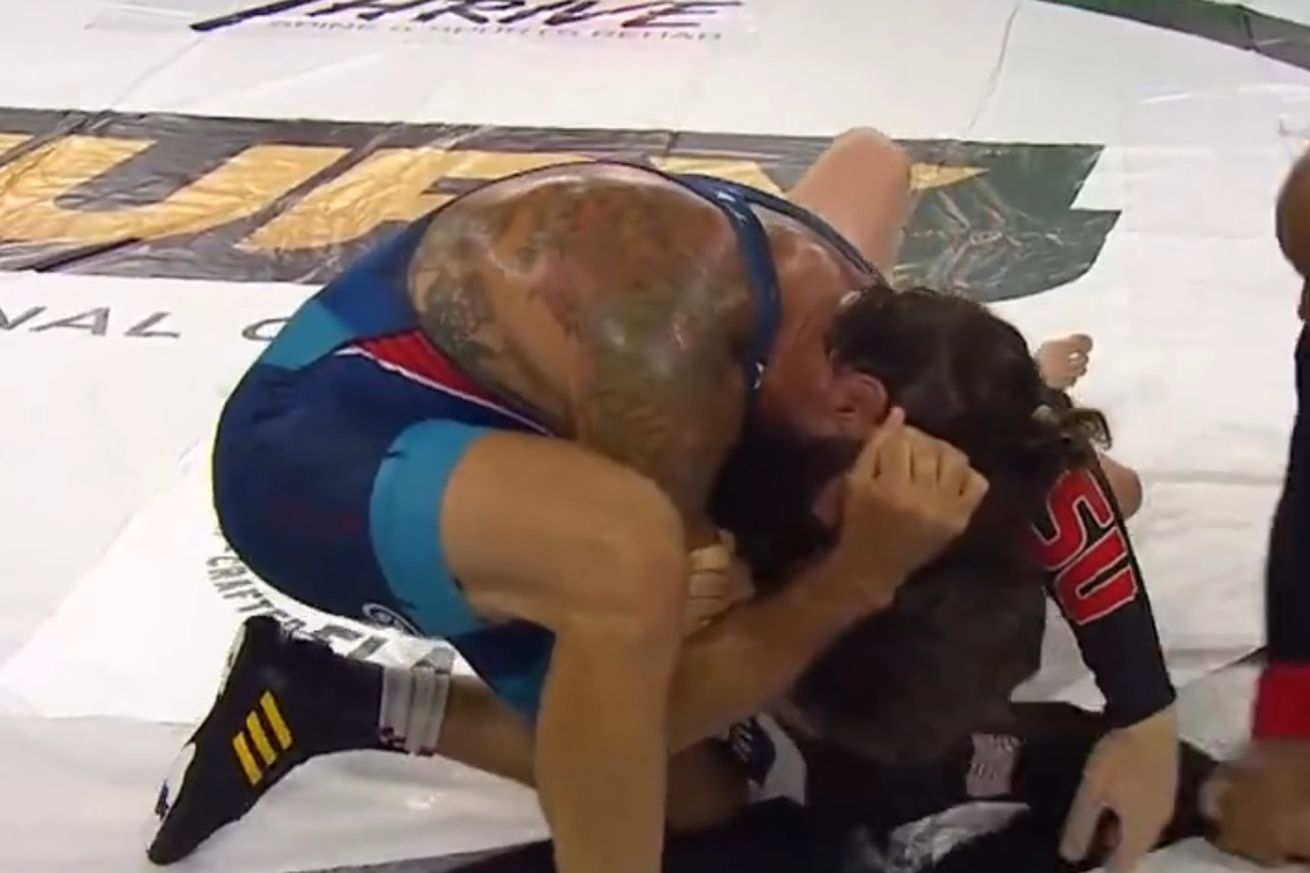 We’ve all had workplace disagreements, whether it’s with our bosses, coworkers, or even the temp in the corner that’s typing just a little too loudly for our liking. Fortunately for most of us, this can be resolved with a simple conversation or swift HR intervention; that said, there’s definitely times where it feels like you just want to choke somebody, right?

Well, this past Saturday, Clay Guida went to work and did just that to a company official.

No, Guida didn’t go rogue and go full Latrell Sprewell on his longtime UFC boss Dana White. He did, however, head to Philadelphia for a Fury Pro Grappling show where he somehow ended up on the mats with Cage Fury Fighting Championships President Brad Boulton.

Guida was actually supposed to grapple fellow UFC fighter Alex Caceres, but when Caceres withdrew for undisclosed reasons, Boulton stepped up to roll with the MMA legend. Now Boulton has a background in jiu-jitsu as well as a couple of amateur submission wins under his belt in MMA, but how would he fare against an active member of the UFC roster and one of the most respected lightweights to ever step into the cage?

RESPECT to the President @Super_Brad steps in on three hours notice to face @UFC Hall of Famer @ClayGuida in his own co-main event! @CFFCMMA

He got choked out. But given the circumstances Boulton really didn’t make a bad account of himself. According to the commentary team, Boulton was called to action that morning, so imagine fighting Guida under the best of circumstances much less with zero preparation. He actually had Guida minding his Ps and Qs inside of his guard too, so this wasn’t a walkover for “The Carpenter” by any means. Just a fun time for everyone involved.

Afterwards, Boulton praised Guida for accepting the new booking and then called the contest “a wake-up call” as he hadn’t trained in months.

“I think it’s time to get back to training, so when stuff like this happens again, I’m ready to perform the best that I can,” he added.

You can watch the entire Fury Pro Grappling 4 event on UFC Fight Pass.

On the less wholesome and more grisly side of things we have a rare finish, courtesy of Bekbolot Abdylda Uulu at Alash Pride 74 (free replay available on YouTube) in Turkestan, Kazakhstan.

Yup, that’s a TKO via throat punch and it’s perfectly legal. Intentionally ramming your fist into an opponent’s throat is, of course, illegal, but Abdylda Uulu wasn’t purposefully aiming the strike there and Aslan Sezer just happened to be caught by it at the worst possible angle. There’s a delayed reaction before Aslan Sezer coughs up his mouthpiece and thankfully the referee noticed something was wrong right away and stepped in as quickly as he could.

Regardless, be sure to add this to any list of the most bizarre combat sports finishes in recent memory.

Over at Circuito Argentino de MMA 10 in Buenos Aires, we find a nice finish preceded by one of the strangest reactions I’ve seen to a kick.

João Oliveira assaults David Herrera with a series of knees before a final shin to the face for the first round TKO. #CAM10 pic.twitter.com/RKCtwbO7dv

Joao Oliveira smacks David Herrera with a front kick during an exchange and it looks for a moment like Herrera is out on his feet but manages to recover before stumbling or falling. Watch that again. He’s staring up at the lights for a full second there. Maybe he should have gone down because it would have spared him a ton of pain that followed.

Speaking of pain, Fatima Juarez brought all of it to Georgina Tarteleti.

These ladies were just scrapping before Juarez connected with that show-stopping left hand to close out the second round.

From Max Fight 24 in Parana, Brazil:

In a kinder world, it would be acceptable for the referee to have stopped this one way earlier, because from Vitor Morais’ opening flurry you can tell where this one is going. Add in the fact that this was just Jean Carlos’ second pro bout and the 11th for Morais and you can understand why I’d have supported an early stoppage here.

Instead, Morais turned Carlos into one half of our Humpty Dumpty Fall of the Week.

Wallace Lopes scored arguably the best walk-off knockout of the week (stay tuned for the other contender) by spamming hooks in classic Wanderlei style.

Love the “Are you not entertained?” pose. At 25, “Angolano” is now 9-2 with all of his wins coming by way of knockout or submission and his two losses by split decision. One bantamweight to watch!

Let’s go back to UFC Fight Pass for our last sets of highlights.

Cage Warriors 137 and 138 were all about debuting fighters making waves, perhaps none more so than 26-year-old featherweight Shoaib Yousaf. He went full Muay thai on Michael Folc, collapsing him with knees against the fence.

A ferocious combo from Shoaib Yousaf gets him the W in Round 1. Making a statement in his CW debut, on short notice too

Leon Aliu with the huge upset, catching his opponent with a KO in the first round. Silencing the crowd
Have we found a new middleweight contender?#CW138 pic.twitter.com/OX4zSxFVIW

That is some fine swangin’ and bangin’, good sir.

It wasn’t all just knockouts for the newcomers here as Daan Dujis took advantage of an overly aggressive Bogdan Barbu to score this excellent triangle choke finish in Round 1.

Daan Duijs snatched up a slick triangle choke, getting the immediate tap from his opponent

I like Barbu’s thinking here, dragging Dujis away from the cage, but you can’t just fall right into danger like that!

At a Jue Cheng King event in Hainan, China, Zhao Zhikang picked up his fifth straight finish with the ol’ low-low-high kick setup.

Zhou Zhikang utilises the low kicks then goes up high, scoring a head kick finish over Hurige in the main event of JCK 2022 4 pic.twitter.com/GmCOhbseHH

Let’s take a look here at two great finishes from Urijah Faber’s A1 Combat 2 & 3 in Wheatland, Calif., which also feature two nicknames on the opposite end of the spectrum in terms of quality.

Terrance Saeteurn picked up a gorgeous knockout of Isaiah Wright with this on-the-button left hook 42 seconds into Round 1.

Terrance Saeteurn turns off the lights at Urijah Faber’s A-1 Combat 3!

Unfortunately, Saeteurn loses major style points for going with “Wrong Turn” as his nickname instead of “Rings Of.”

James Cannon on the other hand, he knows what’s up.

Who saw that coming?

James “The Loose” Cannon via KNOCKOUT

First, this is a beautiful walk-off knockout with just the right amount of theatrics. Second, Cannon goes by “Loose,” which is simple and to the point, much like the finish itself. So that’s another win for Cannon, in my book.

Remember kids, branding is just as important as face punching!

If you know of a recent fight or event that you think may have been overlooked, or a promotion that could use some attention, please let us know on Twitter – @JedKMeshew and @AlexanderKLee – using the hashtag #MissedFists.