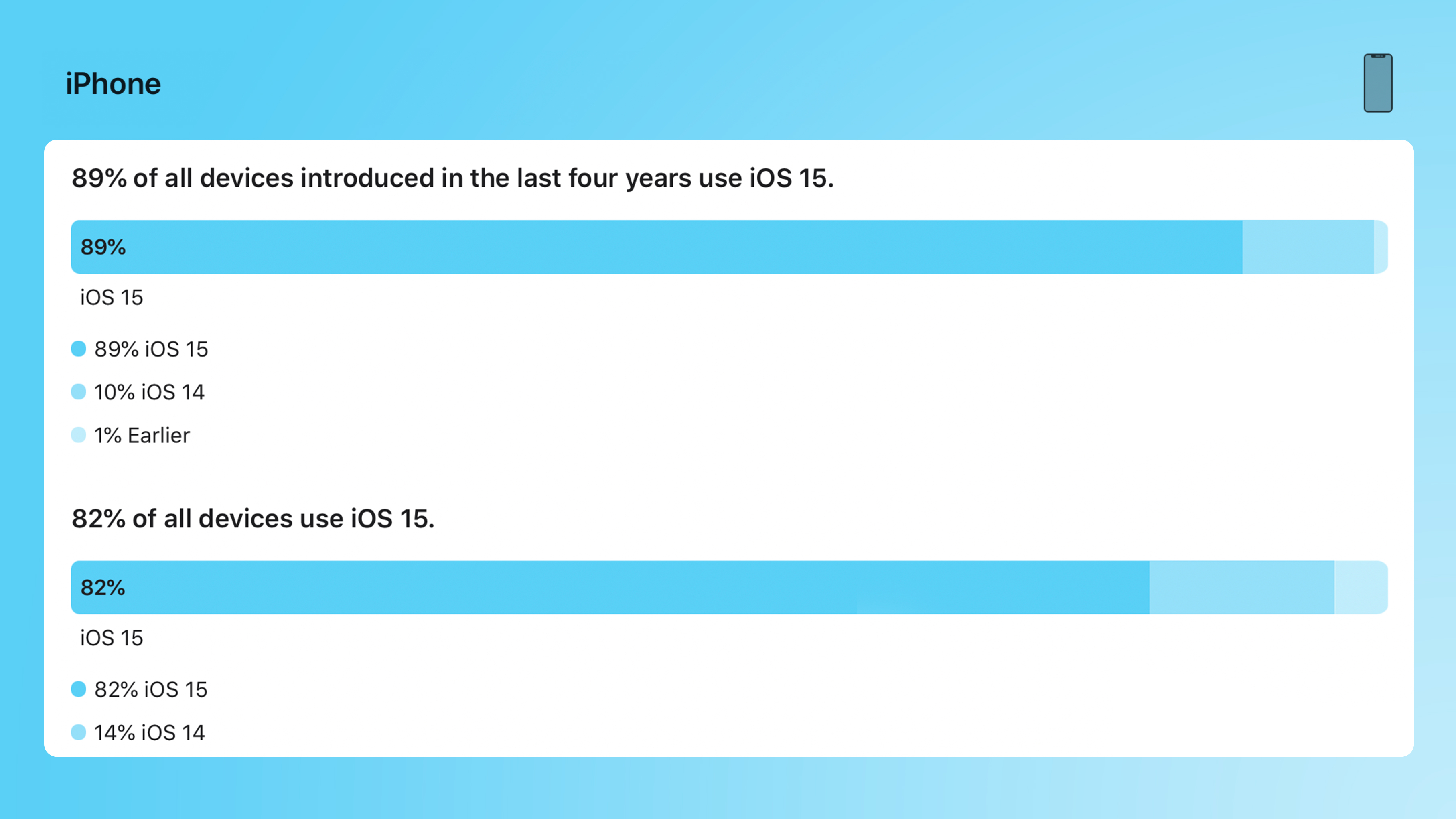 Apple today updated its iOS 15 installation numbers for the first time in five months, giving us a clearer picture of just how many devices are running the latest update nine months after it launched and ahead of the introduction of iOS 16.

iOS 15 is now installed on 89 percent of iPhones introduced in the last four years, while 10 percent continue to run iOS 14. Just one percent have an earlier version of iOS installed.

Apple last updated its ‌iOS 15‌ installation numbers in January, and adoption rates have risen since then. Back in January, just 72 percent of iPhones introduced in the last four years were running ‌iOS 15‌. Since January, Apple has added multiple new features through iOS updates, including iOS 15.4, a major update that brought Face ID with a Mask support, Universal Control, and new emojis.

Apple splits its installation numbers into separate groups because there are still devices in the wild that are not capable of running ‌‌iOS 15‌‌ or ‌‌iPadOS 15‌‌. ‌iOS 15‌ and ‌iPadOS 15‌ installation numbers had lagged behind prior updates like iOS 14 and iPadOS 14 since launch, but things have evened out.

In June 2021, iOS 14 was installed on 90 percent of iPhones released in the last four years, while 85 percent of all devices were running the update, which is not too far off of the ‌iOS 15‌ installation numbers.

Earlier today, we shared ‌iOS 15‌ installation numbers from Mixpanel. Mixpanel estimated that the update was installed on 90 percent of devices, which was close to Apple’s own numbers.

Next Monday, Apple will introduce ‌iOS 16‌ and iPadOS 16, and work on ‌iOS 15‌ will taper off as Apple works to get the new software ready for a fall launch. We’ll get a few bug fix updates before ‌iOS 16‌ launches, but we are not expecting any more major features to come in ‌iOS 15‌.

This article, “iOS 15 Now Installed on 89% of All iPhones From the Last Four Years” first appeared on MacRumors.com