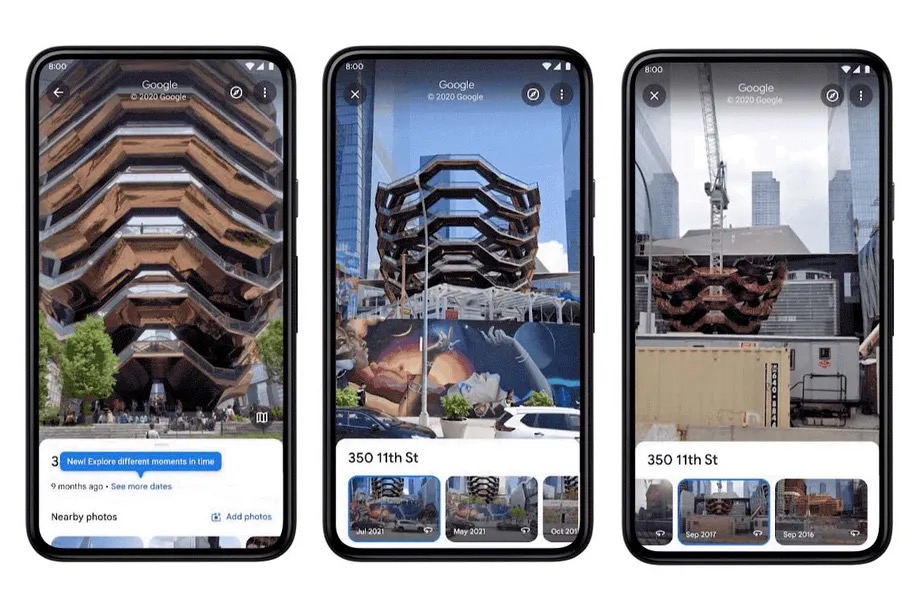 Google Maps’ Street View is 15 years old today, and to celebrate, Google is rolling out the ability to view historical imagery when using the service on iOS and Android.

Google says the feature can show imagery dating all the way back to the launch of Street View in 2007, albeit in locations where it was available at the time. The ability to display historical imagery has been available on the desktop version of Google Maps since 2014, but this is its debut on the mobile app.

Coinciding with Street View’s 15th anniversary, Google has also announced that it will deploy a new camera next year to capture more high-quality images in harder to reach places.

In addition to our Street View car and trekker, we’re piloting a new camera that will fully roll out next year to help us collect high-quality images in more places. This new camera takes all the power, resolution and processing capabilities that we’ve built into an entire Street View car, and shrinks it down into an ultra-transportable camera system that’s roughly the size of a house cat. But unlike house cats, it’s ready to be taken to remote islands, up to the tops of mountains or on a stroll through your local town square.Google says the new camera weighs less than 15 pounds, allowing it to be shipped anywhere, and it’s designed to be modular so that components like lidar can be added to collect imagery with even more helpful details, like lane markings or potholes. The camera can also be attached to any vehicle with a roof rack and operated via a mobile device. “You’ll start seeing our new camera in fun Google colors alongside our iconic Street View cars and trekkers next year,” says Google.

Google is also taking the anniversary of Street View to again highlight its upcoming new Immersive view for cities. Immersive view uses artificial intelligence and high-quality 3D rendering to simulate real-time data, and the feature is set to launch later this year.