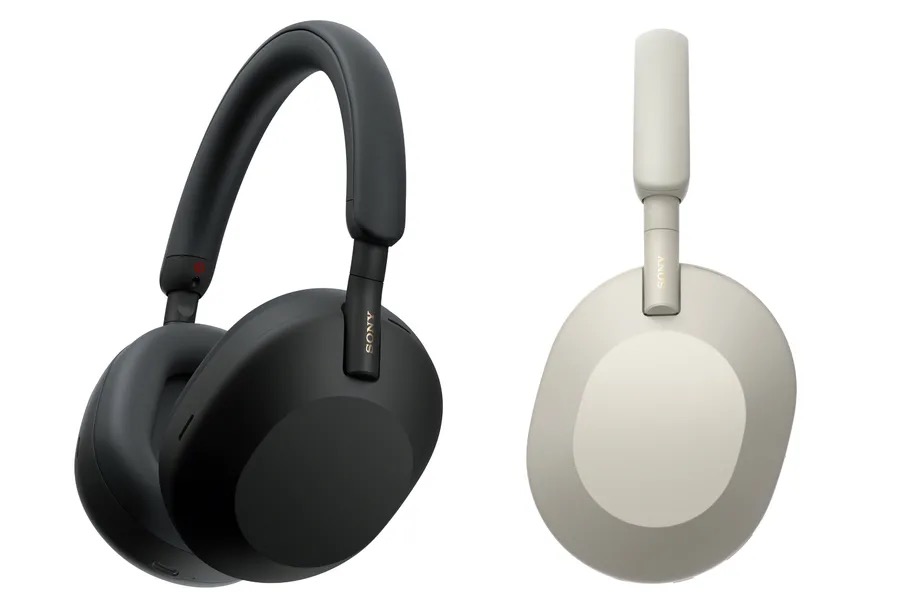 Sony’s flagship WH-1000XM4 noise-canceling headphones have been among the best on the market for some time, and today Sony announced its fifth-generation WH-1000XM5 headphones, boasting a new design and several improvements over the previous model.

The redesigned headphones replace the shrouded arms that swivel on the XM4’s with an exposed arm that has a single contact point at the earcups, which are slightly bigger than on the previous generation, and aim to lower wind noise when out and about. The headphones weigh 250g (versus the XM4’s 254g), and a click-less slider is included in the synthetic leather headband to help wearers get the right fit.

Like the previous model, the XM5’s provide up to 30 hours of battery life on a single charge with active noise cancelation on, 40 hours with ANC off (10 hours more than the XM4’s), and the headphones will reach a full charge in 3 hours. The XM5’s also support Power Delivery, and will give users three hours of playback from just three minutes on a charger.

There are eight microphones (four more than the previous model) which have been moved into a more optimal position for noise canceling – Sony says this makes them better at cutting out high frequency noise. Meanwhile four beamforming mics are built in for better voice call quality, and an NC/Ambient button replaces the “Custom” button found on the XM4’s, although the button remains reprogrammable to activate voice assistants including Siri.

A new 30mm driver provides the sonics, and the headphones use LDAC to deliver the high-resolution audio, given the correct source device, while SBC and AAC are also supported, as is DSEE Extreme upscaling for compressed audio. Sony’s 360 Reality Audio spatial sound effect is also on board.

Sony has ditched the collapsible foldaway mechanism seen on the XM4’s that tuck one cup inside the other, so the rigid XM4 carry case has been replaced with a larger one. The XM5’s also come with a 3.5mm heaphone jack cable.

Sony’s WH-1000XM5 headphones cost $399 – $50 more than the XM4’s – and come in white, silver and black colors. They will be available to buy online at Amazon and other electronics retailers from from May 20. Stay tuned to MacRumors for a review of the headphones including a full comparison with Apple’s AirPods Max.